Highly Intelligent Is Not Highly Creative – How to Be Truly Innovative

In research as well as in entrepreneurship, there are many characteristics distinguishing an exceptional researcher or entrepreneur from just a good one. In particular there is a key difference between highly intelligent and highly creative people, as these characteristics are not necessarily correlated. Intelligence is commonly defined as the ability to acquire and apply existing knowledge and skills, while creativity is the ability for something novel and valuable. New research and new enterprises can therefore be grouped into four categories: 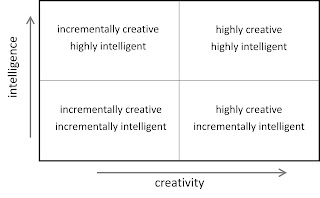 Highly intelligent, incrementally creative researchers or entrepreneurs add an incremental twist to existing methods and knowledge. For instance, a researcher might add mathematical bells and whistles to widely accepted ideas and concepts - in Renaissance Europe they might have added an additional proof that Earth was indeed flat and that the Sun was circling around it. Most of the papers in Nature and Science fall into this category, cementing established ideas by repeating them using more complex algorithms and procedures or by writing the first overview paper categorizing trends in an emerging field (which has the nice side effect of boosting the author’s h-index as it will be widely cited). Among entrepreneurs, these are the people reaping the biggest rewards, Bill Gates falls into this category, as he is a master of recognizing emerging trends, which are then integrated in his products.

Highly creative, incrementally intelligent researchers and entrepreneurs, on the other hand, challenge existing wisdom, frequently upending established beliefs. However, as the execution of their ideas is frequently improvised and not presented in a polished way, they have a hard time gaining acceptance – when Galileo Galilei presented convincing proof that Earth was indeed circling around the Sun, and not the other way around, the Roman Inquisition in 1615 found this “foolish and absurd in philosophy, and formally heretical since it explicitly contradicts in many places the sense of Holy Scripture”. Highly creative researchers in more modern times still have a hard time challenging established wisdom, and more often than not fail in making their ideas stick. In particular, is it near impossible to get these ideas into Nature and Science, as today’s reviewers, just as the Roman Inquisition 400 years earlier, deem their ideas “foolish and absurd”.

Highly creative, highly intelligent researchers and entrepreneurs are the small group of people, who succeed in making their disruptive ideas stick. Other than Galileo Galilei, today’s Nobel Prize winners might get recognition of their disruptive ideas while still alive, although sometimes they have to wait 40 years for their ideas to be recognized by the scientific establishment, as happened to Barbara McClintock, who discovered genetic regulation mechanisms in maize in 1944, and got the Nobel for this insight only in 1983. In between she stopped publishing her research due to being ridiculed by her peers. I would also put entrepreneurs like Steve Jobs and Elon Musk into this category, as they are taking huge personal risks promoting and commercializing novel and untested technologies.

To convince one’s peers and society about novel thinking and products, researchers and entrepreneurs need other essential personality characteristics besides intelligence and creativity. Only by being highly persistent and highly empathic can one really succeed in getting others to accept new ideas. 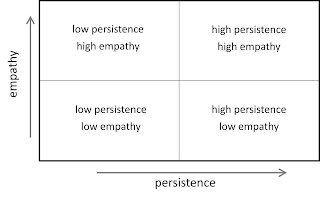 In an excellent article, Albert-Laszlo Barabasi tells the story of Douglas Prasher, who pioneered a process leading to a Nobel Prize in Chemistry, but was unable to find funding for his research, and became a courtesy driver for a Toyota dealership, while Martin Chalfie and Roger Tsien, two of his more persistent collaborators shared the Nobel Prize. However, these two collaborators showed their empathy, by recognizing the contribution of Prasher in their Nobel acceptance speeches, and assisting him to subsequently return to science.
Eingestellt von pgloor