Who will become the next Massachusetts Senator

The race to fill Ted Kennedy's vacant senatorial seat in Washington has turned into a real shocker. At the outset, it seemed clear that in deeply democratic Massachusetts only a Democrat could become the next senator. As of today, it seems to be the other way. Republican candidate Scott Brown is ahead of Democrat Martha Coakley by 5 points.

I wanted to know what the Web would tell us. The picture below shows the daily betweenness values of the two candidates, we can cleary see how Scott Brown is gaining on Martha Coakley. 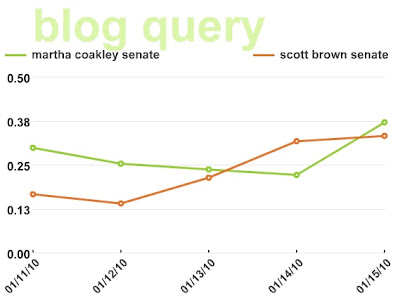 It seems however, that there is a silver lining for Ms. Coakley, at least in the blogosphere.
The next picture shows her centrality as of today (January 15). She is ahead by 6 percentage points.

The last picture, just for fun, shows the Blogpost-Network leading to the percentages. The red dots are the Web sites promoting both candidates. The brown dots promote Mr Brown, but it seems that the green (should really be blue) Web sites carry some more weight, leading to Martha Coakley's slight lead. 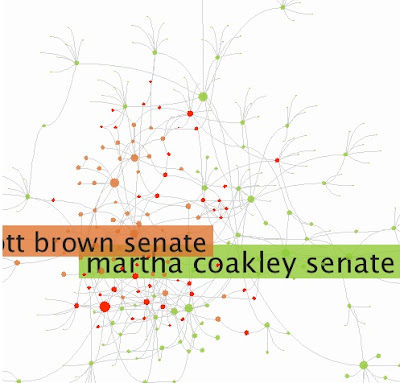 Let's wait until January 19, then we will know for sure.
Eingestellt von pgloor 0 Kommentare

Scientists, Monks and Bankers - It's All About Love

Why do people collaboratively engage in innovative tasks? What’s the motivation to work together to develop something new? After all, if I do everything by myself, I will reap all the rewards for myself, and don’t have to share. Nevertheless, humans are the most social species of all, and progress is only possible by collectively creating new things “standing on the shoulders of giants”, by learning from what others have done, and apply it in novel ways.

According to my colleagues at the MIT Center for Collective Intelligence Tom Malone, Rob Laubacher, and Chris Dellarocas there are three main reasons why people engage in collective intelligence systems:
Money – financial gain is a strong motivator for people participating in markets and traditional organizations, either for direct payment, or for future payment, e.g. acquiring new skills.
Glory – getting recognition and building up a reputation can be an important motivator.
Love – love can be an important motivator, be it because people intrinsically enjoy an activity, because they like to socialize with others, or because they feel they are contributing to a cause larger than themselves.

Randall Collins links together these motivators in his theory of interaction ritual chains. He extends Emile Durkheim’s concept of effervescence, the energy that groups of people experience when they are together at a sporting event, a rave, or a riot. For Collins the mechanisms that drive society are nothing but interaction rituals. Interaction rituals consist of 4 components:
1. the people need to be bodily present at the same place. Through mutual feedback they will charge up the situation with excitement and significance.
2. there needs to be a boundary that demarcates the insiders from the outsiders, giving insiders a feeling to be privileged.
3. all insiders have a shared focus of attention, by communicating this focus to each other they become mutually aware of this focus.
4. by experiencing 1 to 3, all participants share a “common mood or emotional experience”.

When these 4 components combine successfully, participants are infused with emotional energy, the feeling of excitement, achievement, and enthusiasm – in short they are happy! Applying the concept of interaction ritual chains to the above three motivators "money", "glory", and "love" means that "love" as experienced in ritual interaction chains is the key motivator at the core, glory and money are simply enablers to obtain "love". Just look at Tiger Woods, who used his money and glory to buy love.

What motivates scientists?
To explain how love is the main motivator for people interested in collaborative innovation, let’s look at what motivates scientists, people whose profession it is to innovate. At the outset, scientists are motivated mostly by glory: it’s all about publish or perish, i.e. getting one’s papers into highly-ranked journals, and then be quoted by others.
Swiss researchers Margrit Osterloh and Bruno S. Frey - himself a highly-cited researcher - analyze the deficiencies of the current academic ranking system based on peer review and citation count. Currently academics are ranked first by how many papers they get into top-ranked scientific journals. The decision on which paper makes it into a journal is based on peer reviews. The second criterion of success is citation count of their paper, i.e. how many other researchers cite the papers in their own academic work. Unfortunately both of these ranking systems have serious deficiencies, even leading to what Frey calls “academic prostitution”: As has been shown repeatedly, peer reviews have very low to no correlation with future citation, and citation count by other authors is seriously biased towards authors choosing articles they quote to increase acceptance of their own papers. Frey therefore proposes to revise peer review and quote-based ranking to reward intrinsic motivation. After all intrinsic motivation is what usually gets young researchers started on their career path: factors such as curiosity, flow experience in a fascinating activity, self-image, compliance with civic virtues, social or professional norms. In other words, all factors based on love with what they do.
While scientists therefore make a good role model for people involved in collaborative innovation, there is an even better one, which has been tried and tested for well over a thousand years, and has been analyzed by the same Bruno S. Frey: Benedictine monasteries (recently profiled in NZZ).

Why monks are coolfarmers (c)
In a paper on management principles of monastic life, Katja Rost, Emil Inauen, Margit Osterloh and Bruno S. Frey study corporate governance at 134 Benedictine Abbeys in Southern Germany and Switzerland with an average age of nearly 500 years per monastery. It turns out COIN members can learn a lot from the monks. Benedictine monks organize their monastic life around three pillars:
Self-management: normally monks choose their own abbots from among their own ranks. Among the democratically elected abbots, only 11% turned out to be incapable, while among the externally imposed abbots, 67% were judged bad leaders. The Benedictine monks also have a lot of say in daily monastic life: there is a democratically elected “executive board” working with the abbot, a “consilium” advising and supervising the executive board, and there is also the full “parliament” of all monks convening multiple times per year and making fundamental decisions.
Core value system: Benedictine monks adhere to core values such as fairness, justice, mutual respect, mutual agreement, and forgiveness. Monasteries invest a lot of time into carefully selecting their new brothers, which join brotherhood over a well-calibrated multi-step multi-year process. Spending a lot of time with older monks, the young learn core values by example from the old. Additional learning happens through institutionalized readings during the meals.
External control: All the Benedictine monasteries are members of the congregation, lead by the archabbot. A visitation committee from the congregation inspects each monastery every five years, checking financial and spiritual health, with focus on advice, not on control.
Daily life in the Benedictine monasteries is governed by core values instead of control. This autonomy and self-organization increase intrinsic motivation, leading to higher quality results. Comparing average lifetime of a monastery (500 years) with the lifetime of large companies, which rarely survive 50 years, monks easily beat company executives. Love, the main motivating factor in Benedictine abbeys, therefore again trumps money and glory as corporate motivator.

What motivates creativity?
So far it seems that “love” is the main motivating factor for collaborative innovation. So is there a difference between love-driven “good creativity” and “bad creativity”? Creativity defined as “creating new things by combining existing things and processes in novel ways that have not been done before" is neither good nor bad.
But thinking this through further raises the question if e.g. creating a new derivative product for a Wallstreet bank is creativity also. After all, the Wallstreet banker is applying existing thinking to a new area to create value – mostly for himself. And that’s why I think that this is NOT sustainable creativity. The Wallstreet banker is entirely extrinsically motivated – he does what he does to make a lot of money, preferably for himself. Enron employees were highly creative in trading energy options, and even more creative in gaming the Californian energy system – all to create value, towards the outside for Enron and its shareholders, in the end, however, it all boiled down to optimizing their own bonuses. As history has shown, this was not and will never be sustainable! For some time, Enron revenue and share price went up, all to come down with an ugly crash after a few years. All that Enron employees did, was create one heck of a Ponzi scheme. As it now turned out, the real estate bubble in the US, created by “genius traders” at Wallstreet, was just yet another Enron, only at a vastly larger scale.
Enron employees did not break the laws of the United States, what they broke is the laws of good and ethical behavior. The schemes the Enron employees cooked up might have been legal, but they ripped off the majority – all of the users of electricity, i.e. all of us, to the advantage of a tiny minority: firstly the shareholders of Enron, and more importantly, the inventors of the energy trading systems.
And that’s why free markets don’t work. The underlying premise of Adam Smith’s invisible hand is that if everybody is off to fend for himself, trading on an unrestricted market will make society at large to be better off also. Well, this would only be true if there were total transparency, and no law of the bell curve, i.e. of smarter people trying to profit from not-so-smart people. And that’s why I think that only collaborative innovation motivated by “love” leads to sustainable progress.

What is better: banker or monk?
Eingestellt von pgloor 1 Kommentare