Will the EURO break up?

With the crisis in the Eurozone approaching its climax, I was curious to read the collective mind. On the Web, in the blogosphere, and on Twitter there is a lot of buzz about Eurozone breakup or survival.

I decided to ask both the swarm (through blogs) and experts (through News Web sites) as well as the crowd (through Twitter), using our Condor coolhunting tool.
It turns out, swarm and experts think the Euro will survive intact - albeit by quite a slim margin: 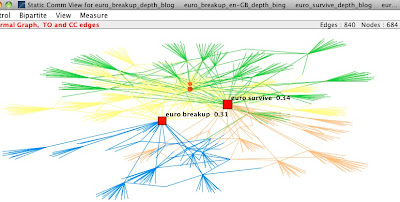 The picture above shows the Blog/Web site network, with the two search terms weighted by the importance (betweenness centrality) of the bloggers and Web sites. The bloggers/Web sites vote 52% for Eurozone survival, and 48% for Eurozone breakup.

The crowd, measured through the tweeters , believes the opposite. The picture below shows the snapshot of today (11/27/2011) of the retweets about “euro survive” and “euro breakup”. 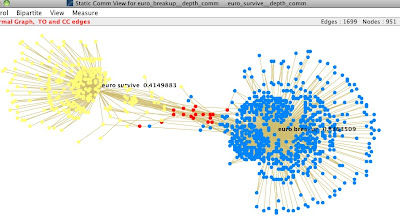 The crowd on Twitter votes only 33% for Eurozone survival, with a decisive 67% of the vote for Eurozone breakup.

The question now is: whom to trust? The crowd is fickle, and the wisdom of crowds easily flips to madness, while the swarm usually has a much better grasp of what the future might be bringing. So perhaps it’s not as bleak for the EURO, as everybody thinks?

What do the Wikipedians think about the Euro?
As an additional expert opinion, I also checked, using our new Wikimaps tool, what the Wikipedians think about the EURO, exploiting the hidden link structure in Wikipedia. I ranked the links by two different algorithms: (1) by the numbers of links and backlinks, and by (2) actuality, i.e. freshness of the edits.
As the two pictures below show, the link-network looks very different for the two rating-algorithms: 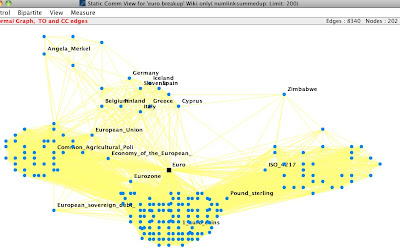 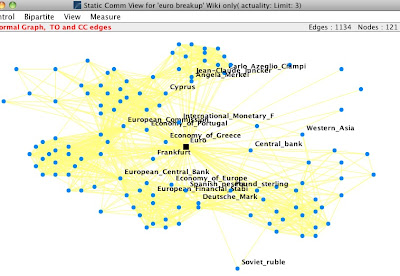 Just looking at the Wikipedia linking structure (top picture) puts the different coins and currencies making up the Euro closest. While the economy of Europe is important for both networks, in the actuality picture (bottom network) the economy of Greece and Portugal, Frankfurt, the European Central Bank, the International Monetary Fund, and Angela Merkel suddenly become key players.
Eingestellt von pgloor 1 Kommentare

Today (11/20/11) I ran a Condor twitter analysis for #ows (the Occupy Wallstreet Twitter tag) and #teaparty (the Tea Party Twitter tag), trying to predict public sentiment for these two social movements.
I only collected retweets, and constructed the retweet-network, measuring the importance of people retweeting based on their social network position. The picture below shows the resulting network, each dot is a twitterer, each line is one or more retweets. Surprisingly we get three clear clusters, a Occupy Wallstreet cluster (blue, at the bottom), a Tea Party cluster (yellow, in the center) and a mixed cluster at the top. Red dots are people tweeting both about #ows and #teaparty.

Aggregating the network, and weighing the tweet of each twitterer with her/his social network position, lead to 55% of weighted votes for Occupy Wallstreet, and 45% for the TeaParty. The results are clear: Occupy wall street sympathizers carry more weight in the Twittersphere than Tea Party members – the question of course remains how representative this is for the rest of the American population. 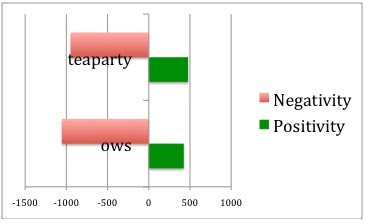 The first conclusion of this chart is the general unhappiness with the current political situation. While both Tea Party and Occupy Wallstreet sympathizers are very unhappy, Tea Party twitterers are slightly happier, although they seem to carry less political weight.
At last I looked at what the key issues of the Occupy Wallstreet discussion today were, collecting the most recent blog posts with Condor (see semantic network picture below). 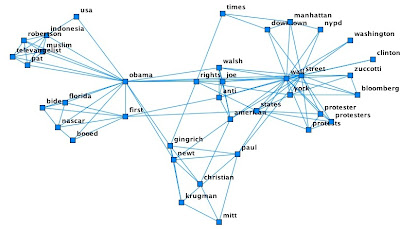 While the Tea Party members rejoice about the booing of Michelle Obama and Joe Biden at the Nascar race in Florida, the Occupy Wallstreet sympathizers lambast Mayor Bloomberg for his lifestyle and the closing of Zuccotti Park. Religion is quite central - as expected - for the Tea Party sympathizers, while a large part of the discussion is focussed on the presidential candidates.
Eingestellt von pgloor 1 Kommentare

What creative swarms can learn from the bees

Last Friday night I had a great discussion with Billie Bivins, host of the show "Make Art...Feel Better" at the Belmont Media Center about creative swarming and the bees. She even got me to cobble together my own bee. Here is the link to the resulting video. Very cool.
Eingestellt von pgloor 0 Kommentare