Homo Collaborensis - Why Steve Jobs did NOT create Apple

Of course Steve Jobs started Apple – together with Steve Wozniak! But he did not create it. He could never have done it on his own. From the very first day on he was relying on untold legions of engineers, scientists, technicians, accountants, and janitors. Not to speak of four thousand years of accumulated wisdom, scientific, and technological expertise accumulated from Chinese, Indian, Mesoamerican, Greek, Roman, German, English, French, and American philosophers, scientists, engineers, and entrepreneurs.

One human on its own is as useful as a single ant in creating the next Tesla, Apple, Google, or Facebook. However just like the ants or the bees, a swarm of humans can do amazing things. And just like a swarm of ants or bees, the human swarm needs a queen bee, which is where Steve Jobs, Larry Page, Mark Zuckerberg, or Elon Musk come in. The key however to their endeavor is communication! Only by communicating their goals, and channeling the accumulated energy and wisdom of their swarm can they set out to create the next big thing changing the world.

The goal of this post (and a soon to be published book) is to describe how to communicate for innovation in large groups of people. Better communication leads to better collaboration, which leads to more innovation. The information stored in a single neuron in the brain only becomes meaningful through the massively parallel network of connecting axons and synapses. This is no different for thousands of human brains, which can only work together to innovate by communicating with each other in the best possible way.

Humans have always been torn between competition and collaboration. This apparent contradiction of the benefits of collaboration puzzled Charles Darwin, as evolutionary survival of the fittest should favor the most competitive at the expense of the most collaborative. Research of the last fifty years indicates the opposite. Super social species like ants, bees, and humans have been spectacularly successful at the expense of more solitary and competitive species. The conclusion is that humans need to channel their competitive energies towards supporting collaboration – a process I call competitive collaboration. This is in contrast to collaborative competition, where humans collaborate to compete more effectively. Musicians in an orchestra are competitive collaborators, they collaborate to play the most beautiful music. Orchestra and audience are all elated and happy after the concert, with individual competition between the musicians channeled towards a superior collaborative experience. A soccer game demonstrates the opposite process of collaborative competition. The two soccer teams play against each other with each team internally collaborating to compete for victory, with one team ending up the winner, leaving the other, unhappy team in the dust, together with its disappointed fans.

We can find similar examples in industry, where more collaborative companies leave the most competitive ones behind. Texas energy company Enron was hailed the most innovative company six years in row by Fortune magazine. CEO and former McKinsey consultant Jeffrey Skilling had introduced an up-or-out process where the least performing fifteen percent of the workforce were yanked out every year, leading to a culture of backstabbing and mutual denigration. In 2002 Enron went bankrupt, when its large-scale corporate fraud was exposed. Compare this with company W. L. Gore & Associates, inventors and manufactures of waterproof fabric Gore-Tex. Other than Enron’s short rise and demise, Gore & Associates has been consistently successful since 1958, when Bill Gore left his position at Du Pont to start a company in the basement of his house. With over 10,000 employees in 2015, Gore & Associates still lives by the core principles of its founder, which he described as freedom, fairness, commitment and waterline. Associates have the freedom to help others grow in knowledge, skill and responsibility. They should be fair against everybody they get in contact with. Associates are in a position to make their own commitments. Before engaging in a situation that might impact the waterline of the company by “sinking the ship” they should engage in consultation with other associates. In combination, these four principles result in a uniquely collaborative culture with highly engaged employees putting the long-term interest of the firm before their own individual interest.

While it is the communication among the employees, which is key for the uniquely collaborative and innovative climate, it is the leaders who need to put it into place. Steve Jobs was not the first charismatic leader to start something radically new. Qin Shi Huang, the first Emperor of China, unified his country with an iron fist. Whoever incurred his wrath was put to death, together with relatives up to the third degree. In one instance 460 scholars owning forbidden books were buried alive. Qin Shi Huang was so much afraid of the afterlife that he had an army of 6000 terracotta warriors built to protect him. Leaders have come a long way since Qin Shi Huang, but even today there are still adherents of Qin Shi Huang’s approach. When I worked in 2001 as a consultant for the ill-fated merger between Daimler and Chrysler, Juergen Schrempp, the CEO of DaimlerChrysler and main architect of the merger was commanding his enterprise from his war room outside Stuttgart, Germany, surrounded by triple rows of computer monitors manned not by Terracotta warriors, but by scores of assistants attending to all his whims. Or take Donald Trump, who loves to fire people, and loathes losers.

It is time for a new type of leader. Linus Torvalds, the creator of Linux, Tim Berners-Lee, who created the World Wide Web, and Jimmy Wales, the founder of Wikipedia, are exemplars of this new style of collaborative leadership. They are the undisputed queen bees of swarms of thousands of open source developers and Wikpedia editors. And yet neither Linus, Tim, nor Jimmy have the authority to fire any of their subordinates. Rather they lead by example and conviction, by carrying the responsibility for their respective projects. They constantly worry about the success of their innovations, and are themselves the chief creators, designers, and builders of their products. They are also evangelists and teachers, the flag bearers of their innovation, constantly singing the praises of the merits of their “labor of love”. They are also entrepreneurs, securing funding and engineering the growth of their enterprise. They are a new species of leaders, moving from Donald Trump style “home competitivus” towards  “homo collaborensis”, rechanneling innate human competitive energy towards collaboration.

In this post I propose a comprehensive framework for building creative swarms. Creative swarms are the main carriers of change to move us from a world driven by competition towards altruistic collaboration. This new style of swarm-based collaborative leadership leads to intrinsically motivated groups where there are only winners, no losers. Swarm based leadership moves from collaborative competition to competitive collaboration: Two soccer teams playing against each other collaborate to compete, while within the team the players compete to collaborate. Today’s society and economy demonstrate more and more examples of competitive collaboration. For example, on the stackoverflow Web site, millions of highly skilled programmers assist novices solving software problems, developing an invaluable resource of programming tricks along the way – all without being paid a dime. All these exemplars of swarm based leadership follow the framework of Collaborative Innovation Networks (COINs), progressing from COIN to Collaborative Learning Network to Collaborative Interest Network. Collaboration in COINs is based on social quantum physics, most prominently entanglement between two people over long distance, and the Heisenberg uncertainty principle – a system that is measured changes its behavior. Entanglement in quantum physics means that if two geographically separated particles are entangled, if one particle changes for example its spin angle, the other will change it the same way at the same time, independent of location. The Heisenberg uncertainty principle states that the more accurately one property of a particle is measured the less accurately other complementary properties of the particle can be measured. Collaboration in human networks follows the same two principles. Self-organizing swarms apply the five laws of collaboration: transparency, fairness, honesty, forgiveness and listening. Six honest signal of collaboration developed over ten years of research by our team at MIT show how everybody can communicate to collaborate in small teams, measuring interpersonal interaction through social networking: strong leadership, balanced contribution, rotating leadership, responsiveness, honest sentiment, and shared language. 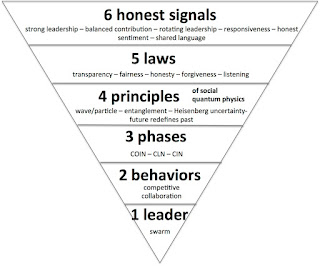 The first chapter on swarm leadership (level 1 in figure 1) describes why humans are motivated to contribute to the greater good, and why we are getting less selfish thanks to mirror neurons that make us more emphatic and why this is crucial for our well-being and happiness.
The second chapter shows how we move from competition towards collaboration (level 2 in figure 1). It describes how competitive and collaborative behaviors can be combined for the greater good of collaboration. It discusses the concepts of competitive collaboration – think musical orchestra, and collaborative competition – think two sports teams competing, illustrating it with practical examples.
The third chapter introduces the three phases of building your swarm, based on the concept of Collaborative Innovation Networks (COINs) (level 3 in figure 1). It explains how we can leverage online social networks such as Facebook, Twitter, and Wikipedia to find “others like me” to collaborate globally on the issues which are most important to each of us.
The fourth chapter discusses the four principles of social quantum physics (level 4 in figure 1). It describes how social entanglement is created through the theory of mind. The theory of mind, enabled by mirror neurons, corresponds to the quantum physics wave-particle duality. By nurturing empathy, it gets us to collaborate closely. Social Quantum Physics also explains how the future redefines the past, by applying the Heisenberg uncertainty principle: if a social system is measured, and the measurements are mirrored back to the participants, the system will change, leading to a reinterpretation of the past.
The fifth chapter introduces the five laws of collaboration. Transparency, fairness, honesty, forgiveness and listening are the five key axioms that will lead to a more collaborative society, where self-motivated people work together on the issues they really are passionate about.
The sixth chapter discusses the six honest signals of collaboration. They are calculated by mining all sorts of communication archives such as e-mail, phone logs, but also Twitter, or direct interaction though sociometric badges worn on the body. Strong leadership, balanced contribution, rotating leadership, responsiveness, honest sentiment and shared language make quality of collaboration measurable.
Chapter seven introduces a wealth of business examples from our own research. They show how building Collaborative Innovation Networks (COINs) leads to innovation that sticks, because it is based on competitive collaboration, not collaborative competition. Numerous case studies from industry illustrate how companies can leverage competitive collaboration to increase innovation by improving collaboration.
Chapter eight discusses a novel paradigm in healthcare. It introduces “Collaborative Chronic Care Networks” (C3N) as examples of intrinsically motivated communities of patients, doctors, and researchers of chronic diseases who collaborate to develop a better life and cure for their disease.
The final chapter proposes to educate “Renaissance Humans”. It explains how transactive memory allows each individual access to the accumulated knowledge of humankind through the Internet, educating collaborative and creative “renaissance humans”. It also discusses a first version of such a course, the Collaborative Innovation Networks (COINs) seminar which brings together global virtual teams of students to solve complex collaborative tasks.