Bundestagswahlen in Germany - Who will be the next Federal Chancellor

Tomorrow September 27th, 2009, there are elections to the German parliament. It's the conservative (by German standards) CDU/CSU led by Chancellor Angela Merkel, against the social democrats (SPD) led by Foreign Minister Frank-Walter Steinmeier, with the liberal democrats (FDP,Guido Westerwelle) and the Green party (Jürgen Trittin) as minor players. Predictions still seem to project a win of CDU, although it is not clear if CDU and FDP together will get a clear majority.
A quick coolhunting in blogs seems to speak a clear language: 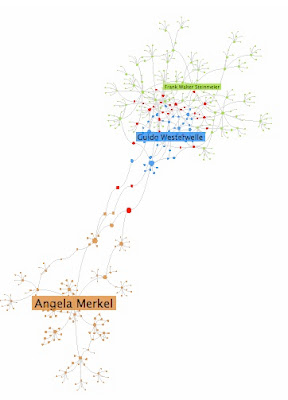 Angela Merkel seems the clear leader, being in a sphere of her own, and her competitors huddled together in the other corner. SPD candidate Frank-Walter Steinmeier has a large support network, although of lesser influence.

But wait! What we are looking at above is what the WORLD thinks and blogs - and there Angela Merkel, as the incumbent Chancellor, has a huge advantage. If we zoom in on German language blogs, using the German title "Bundeskanzler" as attribute, to make sure we get the German bloggers, the picture changes dramatically:

Now Frank-Walter Steinmeier is the leader. But there is still hope for Angela Merkel, together with Guide Westerwelle's FDP, she gets a majority, at least in the blogosphere. The situation worsens for Angela Merkel, if we factor in the other candidates from farther left, the Greens (Jürgen Trittin) and Gregor Gysi from the Left Party: 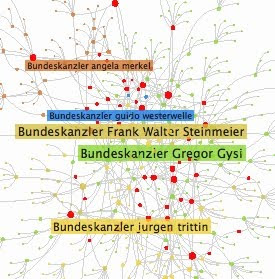 In this constellation, the left wins (size of the font of the politician's name is proportional to percentage of votes). As of yesterday, the long-term trend in the blogosphere still predicts victory for CDU, although the lead is shrinking: 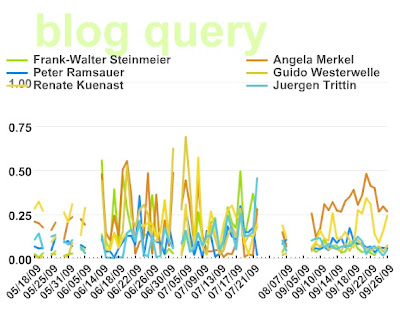 But this was the general coolhunt, which as I explained at the beginning of this post, measures what the WORLD says. Let's wait until tomorrow evening, to see if German Bloggers and the German population agree.
Eingestellt von pgloor 0 Kommentare

Coolhunting for the next Swiss Federal Councilor - yes it works

In the last three posts I have looked at what the crowd on the Web was saying about the chances of the 3 main candidates for Swiss Federal Councilor in the elections of Sept. 16 to succeed Bundesrat Pascal Couchepin. And note that we had to predict what the crowd was thinking what the 248 members of the Swiss National Assembly would be doing. The ranking was (see three previous posts):
1. Urs Schwaller
2. Christian Luescher
3. Didier Burkhalter

If you look at the voting in the Assembly yesterday, it is (from Wikipedia)

So the crowd PERFECTLY predicted the voting pattern in round 1!
The group dynamics in the Assembly in the succeeding rounds, and in particular the behavior of individual people like the withdrawal of Christian Luescher after round 3, the crowd can NOT predict, that's up to Mr Luescher - there are still good uses for the crystal ball.
Eingestellt von pgloor 1 Kommentare

Who will be the next Swiss Federal Councillor - Final update

Tomorrow Sept 16 will be the elections for next Swiss Federal Councillor in succession of Pascal Couchepin. Here the latest coolhunting results on the blogs for the four main candidates:

Who will be the next Swiss Federal Councillor - 2nd update

The elections for the successor of Swiss Federal Councilor (Bundesrat) Pascal Couchepin will be this Wednesday, Sept 16. Here is a new update on the trend prediction, as of this evening, Sunday Sept 13.
Again the disclaimer is that it is not the Swiss population who is electing the Bundesrat, but the 248 members of parliament, which of course makes it much harder to predict the outcome. Nevertheless, here first the general trend for the currently three official candidates, Christian Lüscher, Didier Burkhalter, and Urs Schwaller, and three other candidates based on the "electoral votes", i.e. Web Betweenness of the Swiss German bloggers for the last three days. 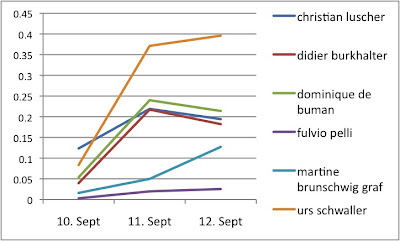 Christian Lüscher lost his lead, Urs Schwaller is the leader, Dominique de Buman is number two. This is based on the accumulated coolhunting in the German language blogosphere over the last week:

Weltwoche.ch, Bernerzeitung.ch, and Politreport.ch are the most influential Blogs - the kingmakers - to promote the candidates.

Doing a combined coolhunting for the German language Web and blogosphere and adding the French Swiss (by including tracking the prominence of Web sites talking about "conseil federal urs schwaller", etc.) gives a slightly different picture:

Here is also the content map of the German language blogs about the four main candidates Schwaller, Buman, Lüscher, and Burkhalter. The size of each square denotes the betwenness of a term. 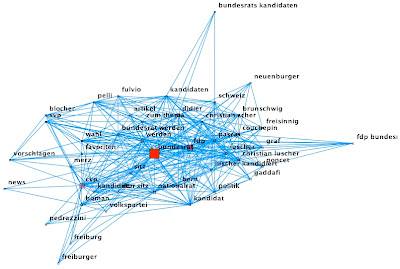 The term cloud is nicely split into an FDP and a CVP side. What stands out is that Christian Lüscher is haunted by his lawyer colleague Poncet who is representing Gadaffi in his dispute with Switzerland. On the other hand it seems that the FDP has a slightly larger claim (higher betweenness) on the vacant seat than the CVP. Blocher, another politician from the right-wing SVP also comes out prominently as an influencer, together with FDP president Pelli. There is speculation about Bundesrat Merz stepping down soon also.
Eingestellt von pgloor 0 Kommentare

Who will be the next Swiss Federal Councillor - appended

After I did my first automatic coolhunting yesterday, I got feedback that I had forgotten to include one of the main candidates, Christian Lüscher (FDP, Geneva) into my coolhunting. So I repeated the process for both the German and French speaking parts of Switzerland. Here are the results:

To resume: The French speaking Swiss favor non-candidate Fulvio Pelli, both in long term recognition (Web) and prospects for tomorrow (Blog). For the German speaking Swiss, Christian Lüscher is the clear favorite, particularly on the blogs.

Looking at the social network on the Swiss German Web confirms the central position of Christian Lüscher: 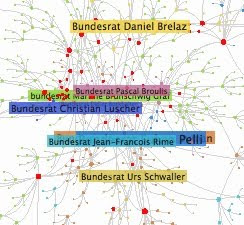 Who will be the next Swiss Federal Councillor

For my coolhunting I looked at the popularity of 8 leading candidates (Martine Brunschwig Graf, Dominique de Buman, Fulvio Pelli, Urs Schwaller, Daniel Brelaz, Jean-Francois Rime, Pascal Broulis, Didier Burkhalter). I ran the queries both on the Web, and just for blogs. I also checked who is the most popular candidate among the Swiss Germans by adding the word "Bundesrat" (this is the title of a Swiss Federal Councillor in German) to the name as well as "Conseil Federal" - the French title - to coolhunt among the Romands, the native French speakers of Switzerland.

The results are quite interesting. Here is the percentages on the Web for the leading 7 candidates:

On the Web, Dominique de Buman (CVP, 21%), Martine Brunschwig Graf (FDP, 19%), and Jean-Francois Rime (SVP, 17%) are the most popular. As the Web reflects the election history until now, this means that these three candidates have the widest general recognition today.
Just for fun, let's also see if there are some alliances among the politicians on the Web, based on the linking structure on the Web: 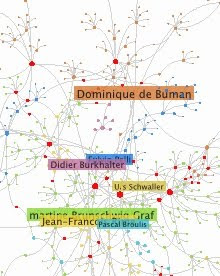 It seems as if Dominique de Buman is in a category of his own, while Martine Brunschwig Graf (FDP) and Jean-Francois Rime (SVP) seem to overlap really closely. That's not too surprising, because FDP and SVP in many isues align themselves. Didier Burkhalter (also FDP) is the candidate in the center, close to Fulvio Pelli, (non-)candidate and president of the Swiss FDP.

Now let's see what the blogs are telling us - the network below tells the story. Again Dominique de Buman commands a large share of the vote of the Swiss bloggers. Jean-Francois Rime is much less central here. Daniel Brelaz is even more popular with the bloggers, but wait a moment and look his position in the social blogging network: 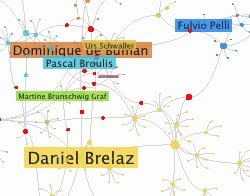 The explanation for his popularity is that he is also frequently quoted by bloggers in his role as the mayor of the city of Lausanne, as well as an active member of the green party, which puts him into quite a polarizing position. Not a place to be in to become the next Federal Councillor in consensus-loving Switzerland.

Here official non-candidate and president of the Swiss FDP Fulvio Pelli leads ahead of Daniel Brelaz and Dominique de Buman. In the Swiss German Blogosphere, Pelli is out, while Jean-Francois Rime is in the lead, ahead of Didier Burkhalter and Martine Brunschwig Graf.

It is also interesting to see what Web sites are the most brand-building for the candidates (i.e. they have the highest betweenness centrality in the networking pictures). Here is the list:
1. Swissinfo
2. Youtube
3. Wikipedia
4. Facebook
5. Reuters press releases
6. LinkedIn
7. NZZ.ch
8. Parlament.ch

The first Web site is an official Swiss news Web site, but the next ones are the Web 2.0 sites popular with teens and tweens. NZZ.ch, the leading Swiss newspaper, is only number 7. The lesson is obvious: social networking rules the world, at least on the Web!

Back to our original question: who will be the next Federal Councillor: It is still very hard to tell as the leading candidates seem almost tied. Nevertheless, here my try based on the coolhunting insights:
- Dominque de Buman, the leader in two categories across all of Switzerland is my front runner.
- Martine Brunschwig Graf is a consistent third on most charts, so she might take the lead from behind.
- as a long shot, I would nominate Didier Burkhalter (current favorite among the Swiss German bloggers, representative for the largest group in the Swiss Assembly)
Check back in a week, to see how the positions will have changed.
Eingestellt von pgloor 0 Kommentare