The Idea
Ever since Facebook rolled out pages in 2007, it has become very easy for users to show their interest in music, film, books, artists and other entities in various categories by clicking the "like" button on a specific facebook page. Most of the time, the information about your personal “likes” is not protected automatically and therefore can therefore accessed by everyone, even if not logged in.
We know that Mark Zuckerberg likes the Yankees and is a fan of Jay-Z, but that might just be of interest to his friends or People magazine. But there is much more information that we can infer from the social graph. Can Barack Obama know about the preferred beverages or favorite books of his fans? He can! ...but he probably doesn' t care. With the information provided by Facebook’s social graph it is easy to identify connections between books, films or brands - without conducting a survey.
The Data
Building a network by linking two pages, depending on the frequency of their occurrence on the same user profile produces graphs like the following.

The fact that people are providing this rich information creates different opportunities for analysis. Surely Facebook is already taking advantage of their data, but in social science and marketing user behaviour could be analysed. Certainly the advertising industry could benefit from, and would pay money for, such demographic information.
Demo Prototype
This web application illustrates a potential use of the data, which is based on 20 000 public Facebook profiles from different countries. An underlying bipartite “user to page” relation is used as a data source. 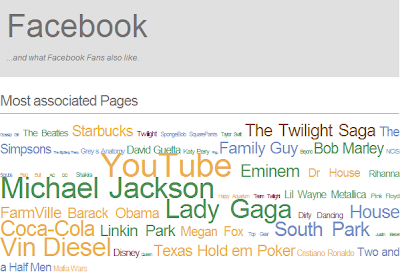 You can navigate through the TagCloud by clicking on a random entity. Different colors indicate categories (film, books, music, interests, other). The average of other pages listed in categories for the current page can be seen in the middle graph. The last graph shows the relative percentage of users liking this page in different countries.
It gives you a broad idea of the structure, though the current data is not representative of all Facebook users as the data was crawled from just 8 countries.
The key findings from this visualization:
So, if you want to stand out among those 500 million Facebook users, just don't like Lady Gaga, Michael Jackson or Barack Obama.
Facebook Pages - Categories


The chart below shows how categories of Facebook pages are used in different countries. 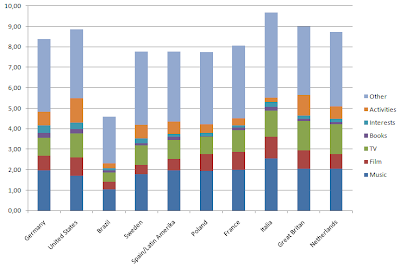 On average, users from Great Britain and the United States list twice as many pages in their profiles than users from Brazil. Furthermore, differences in certain categories can be identified. Listing books or activities seems to be very unpopular, in contrast to pages in the music or TV categories.
Eingestellt von Michael Schober 3 Kommentare

To Be a Better Manager Means Not to Be a Manager!

I think that time has come to fundamentally rethink the way we train and reward managers. While social entrepreneurship has become a popular buzzword at management schools, and Andrew Cuomo, the new governor of the state of New York asked all his senior staff to take an ethics class in the first sixty days of his tenure, this is still just lip service. My proposal is far more radical:
Make managers redundant!

Let me explain what I mean.

Artists want to create something new and beautiful, to touch the lives of people interacting with their art. Whether it is painters, sculptors, actors, singers, or orchestra musicians, they do what they do mostly not because they are paid to do it, but because they love what they do.

Scientists want to discover something new, to further the state of the art in their chosen field of science. Whether it is pure science like physics or astronomy, or applied science like medicine or engineering, their goal is to create something new by taking what is there, and combining it in new, innovative ways.

Teachers want to impart knowledge to their students. They want their pupils to understand, to become lifelong learners, and to be self-sustaining members of society. The creativity of teachers consists of developing new ways and methods of conveying and transferring knowledge.

While artists and scientists want to create something radically new, either a new piece of art, or a new scientific insight, managers and teachers are mostly executors. Most of the time they do not really excel in creating new things, but in executing project plans, or executing curricula. Our education system rewards teachers to produce managers, not artists and scientists.

Income is negatively correlated to intrinsic motivation
Artists do what they do because they love it. They are the most intrinsically motivated of the four phenotypes – followed by the scientists and the teachers, who are scientists and teachers because that’s what they like, and not to get rich quick. This is very different for the managers, who most of the time chose their profession to be successful. They expect their success to be rewarded by fat paychecks and high status in society. The income of artists, on the other hand, shows a definitively long-tail distribution, meaning that there are very few Picassos and Brad Pitts getting rich and famous. Rather, the vast majority of artists can expect to make very little money over the course of their careers. Salaries of scientists and teachers show a similar distribution with most of them living off quite modest salaries. Income distribution of managers, on the other hand, shows a fat tail, meaning that many can expect to make a substantial income, and a still sizeable number can expect to make a lot of money. The most popular way for scientists, artists, and teachers to increase the size of their salaries is to accept “managerial” roles.

The key difference therefore between managers and the three other phenotypes is that artists, scientists, and teachers are intrinsically motivated, while managers are motivated extrinsically.

On a side note I would like to emphasize however that this discussion is about phenotypes. This means that this distinction into four categories is about oversimplified role types. Artists, scientists, and teachers don’t mind getting rich and famous, and managers might genuinely want their company to succeed in making the world a better place. Reality is never black or white, but rather somewhere in the middle, and most managers also have traits of an artist, scientist, or teacher, and the other way round.

So what are my recommendations for a manager?
The answer is very short: Forget about being a manager!

Trust your emotions. Become an artist, teacher, and scientist. Discover the joys of creating something new, of coaching your employees and help them grow. This will help you start doing what you love, and not what you are paid to, becoming intrinsically motivated in your job. This will also make you much happier. In short, become a coolfarmer!
Eingestellt von pgloor 1 Kommentare