How Innovation Happens and Why You Should Care

Predicting the Outcome of the Swiss Popular Votes on March 11, 2012

On March 11, 2012, the Swiss will vote on four national initiatives which have been launched by popular referendums. Among the 4 topics, the Swiss decide if they want to give themselves 6 weeks of vacations annually ("6 Wochen Ferien für alle"), whether the construction of second homes in holiday resorts shall be restricted (" Schluss mit Zweitwohnungen"), and whether saving for a first home shall be partially tax-excempt ("Bauspar-Initiative).

Using Condor, I was curios to know what the Blogs, Websites, and Twitter would tell me, one week before the vote will take place, about Swiss public opinion and the outcome of the elections. First I checked Twitter. As the picture below shows, not much is going on on Twitter. 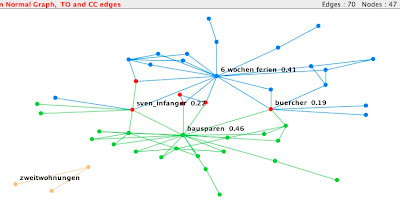 Much more is going on on the Web, and blogs:

The picture shows the search topics (initiative zweitwohnungen, bausparen initiative, initiative 6 wochen ferien) as well as the key web sites. We can immediately see that the 6 weeks of vacations are by far the most talked about (the square is the largest, with importance of 0.28). The key Web sites are Wikipedia and Facebook as well as the Web site of the Swiss parliament, where the Swiss parties comment on the paroles they have given out for the initiatives.

The "6 Wochen Ferien Initiative" will be rejected (0.11 no to 0.06 yes), the "zweitwohnungs initiative" is currently in a virtual tie (0.06 yes to 0.06 no) between proponents and opponents of the initiative, and the "bausparen initiative" currently would be accepted by a small margin (0.07 no to 0.08 yes).
Facebook has a central position in the discussion network, it seems friends and neighbors are busy discussing advantages and disadvantages of the additional vacation week. Wikipedia and YouTube are also highly popular in making up the minds of the voters.

While the bausparen initiative is the least talked about on the Web right now, I was still curios to see what people talk about. It turns out they talk about energy savings, the environment, and tax advantages. Not much emotions! 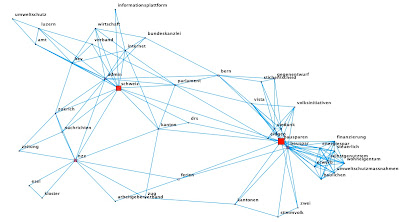 Let's wait for the final result of the vote next Sunday, March 11.
Eingestellt von pgloor 2 Kommentare