We have now opened registration for our cool new CoolPeople application. CoolPeople finds influencers, trendsetters, and creators, and even measures their success. This can be done for example for "nanotechnology entrepreneurs in India", but also for "John Smith". It even finds the attributes of the people related to "John Smith".

The picture below shows the CoolPeople network about the topic "Swarm Creativity" as a cybermap social network picture. 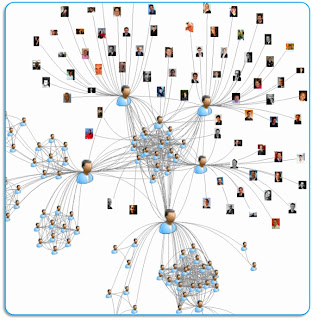 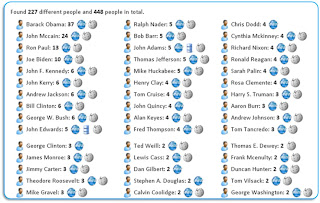 If you want to see even more before pre-registering, try a dynamic preview: click on the "Condor" picture here which will bring up a dynamic cybermap about "swarm creativity".
Eingestellt von pgloor 0 Kommentare

Bankers are all Mad(off) – it’s communities we trust!

There are two articles in today’s NYT which resume where we stand regarding trust in ourselves, society, and our future. The first one is by NYT columnist Paul Krugmann, who talks about the Madoff economy. While everybody deplores the criminal tactics of Bernie Madoff, who, in the biggest Ponzi scheme of all times, squandered 50 billion dollars of investor money coming from anywhere on earth, Krugman makes the point that the rest of the Wallstreet bankers is not much better than Madoff. All of them got outrageously rich through outsized bonuses collected on trades in high-yielding, but highly risky assets. As the smoke at Wallstreet is slowly clearing, the bankers are keeping their bonuses, while the investors' money is gone. While Mr. Madoff skipped a few steps, simply stealing his customers’ money while passing on some of it to his earlier investors, the other bankers collected huge fees while exposing investors to risks they did not understand.

The incomes of these employees in “securities, commodity contracts, and investment” have exploded over the last years, to the level where an annual income of a million dollar was nothing special, and even incomes of $ 20 million were fairly common. This has led to a magnetic pull of quick wealth, distracting the smartest students into investment banking, away from science, public service, and everything else. The vast riches that could be earned corrupted their sense of reality and ethics, leading to a society where people like Mr. Madoff, who were making a lot of money, were idolized. To quote Paul Krugmann “What we are looking at now are the consequences of a world gone Madoff!”

Where are people putting their trust and money today, now that they have been let down by the brilliant investment stars at Wallstreet who were most brilliant in optimizing their own bonuses and checkbooks? Part of the answer to this question is in another article in today’s NYT. It seems that in rapidly growing numbers people are turning to the Web for investment advice. Web based investment community sites such as Wesabe, CakeFinancial, and Credit Karma and online banking sites such as Mint and Smartypig have been experiencing double digit membership growth since September, adding up to 25% new members in the last two or three months.

The biggest challenge for these Web sites is to earn the trust of their users. After all, users are asked to upload sensitive information such as their social security number, investment portfolios, credit card numbers and bank account information. Comments by users of these online community Web sites are quite telling:

Because of the crisis, I actually felt more comfortable than if this were some big bank. With everything that’s going on with banks, I’m not ready to give them my money. This Web site makes me feel safer.

Compared to simple old online banking, people particularly appreciate the feeling of community that these new financial communities are offering through Facebook and Twitter feeds. This way they can get immediate feedback and advice from otherwise anonymous people who are in the same situation.
It’s communities we trust!
Eingestellt von pgloor 0 Kommentare