What is more accurate - polls or the Wisdom of the Web?

Polls about US Presidential elections are notoriously inaccurate - that's what Swiss newspaper NZZ (Neue Zuercher Zeitung) says in an article in yesterday's issue. While Barack Obama is still leading his competitor John McCain in the polls by 3 to 6 percentage points, this is far less than the 15 points with which the Democrats lead the Republicans in the senatorial elections.
According to many analysts, one hidden reason for the low-digit lead of Barack is the issue of race. This is an issue that Americans are afraid to admit to pollsters. This is why they lie to the pollster, similarly to how they lied when asked about going to church, doing sport, and drinking alcohol.
When asked in person about whether they'd go to church regularly, 56% answered yes. When asked anonymously, it only were 25%. When personally asked if they did sports regularly, 58% claimed they did. When asked anonymously, this number dropped to 35%. When asked about drinking alcohol regularly, anonymous answers resulted in 53% of people regularly consuming alcohol, personally asked, only 39% admitted to drinking regularly.

This leads one to wonder if people are not telling the truth about planning to vote for a black president? Using our coolhunting tool Condorview, I today checked what the Wisdom of the Web predicts: 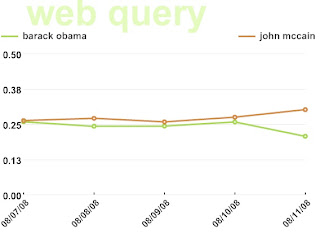 It does not look good for Barack Obama, at least on the Web. Who is telling the truth - the Web or the polls? At the latest, we will know after the elections.
Eingestellt von pgloor 0 Kommentare

Streetparade - Swarm Creativity of another kind

Today (Aug 9, 2008) was again streetparade in Zurich, arguably the second largest Techno party in the world (the largest seems to be the Love Parade in Dortmund), with over 800,000 participants. 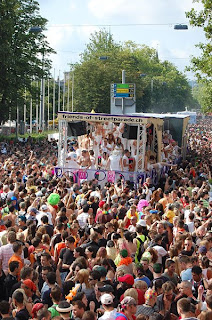 This has now been happening every year since it was started by math student Marek Krynski in 1992. A huge swarm, and hugely creative. About 30 love mobiles, huge trucks as mobile dancing platforms, and hundreds of thousands of people dressed up (or down) as creatively and sexy as possible. I have always been wondering: why are people participating in such huge numbers? My answer is: emotional energy. The street party is a unique way of combining collectivism and individualism, the feeling of being part of a huge swarm, while still showing off as a unique individual. The techno rave gives a rythm to the swarm, increasing the we-feeling immensely.
Eingestellt von pgloor 0 Kommentare

The end of the Federer era - is it close?

The answer seems to be yes, at least when looking at the wisdom of the crowd through Web coolhunting with Condor. There the longtime number two, Rafael Nadal, is ahead of Roger Federer by Web buzz for the last four days. It has been a masterful four and a half years for Roger Federer, but now it seems there is not much that he still can do to defend his number one position, at least that's what the Web crowd seems to think.
Eingestellt von pgloor 0 Kommentare