Our team at MIT and galaxyadvisors has been creating e-mail and other social media based social networking maps for the last 15 years. The question we have to constantly answer is why it is a good thing to have these social networking maps, which I call “social landscapes”. The way to think about them is like a "Google Map for social landscapes". Google Maps has become immensely useful to me for driving the congested roads in Boston and Zurich. While I have been living in both cities for multiple decades, and usually know my way around, Google Maps has become indispensable for seeing where precisely I am, and where to go next. Through location tracking it shows me where precisely I am. And by aggregating the changes in anonymous location tracking information of thousands of drivers like myself, it shows me where the traffic jams and road construction is, taking me on the fastest way to my destination, and accurately predicting when I will reach my goal. 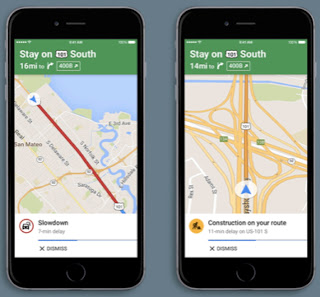 Our social media tools Condor and Condorview provide similar naviation tools for the social landscape of individuals and organizations. The aggregated social network map tells me how the overall social geography of my collaboration network looks like, where potential roadblocks and shortcuts might be to more efficiently reach my goal.  The picture below shows three screen shots of our Condorview tool, which gives an individual a personalized anonymized overview of their social environment.

Recently a customer and research collaborator introduced Virtual Mirroring Based Learning at his company, using Condor to create e-mail based social networking maps for virtual mirroring for managers and employees.  Showing a pattern of the past allows each person to see a complete view of the present social landscape in a way they have never seen it before, which permits them much better navigation in the future.

The Best Way to Predict the Future is to Create It Yourself.

Why Hillary Clinton was NOT elected President

Yesterday the NYT wrote about Barack Obama navigating the slippery slope of giving well-paid speeches (he gets up to $400,000 per speech) while avoiding the impression of selling out his status as a former president of the United States of America. This made me think again about the motivation pyramid I had described in “Swarm Leadership”, from money, power, glory, and love, to enlightenment. Derived from Maslow’s pyramid, it occurred to me that there is an additional "status" layer. Barack Obama can translate his high status as former President of the US into money, by charging enormous speaking fees, however he has to be extremely careful not to reduce his status by giving the impression of cashing in.  We can observe this effect on all layers of the motivation pyramid, which in its revised format looks now as follows. 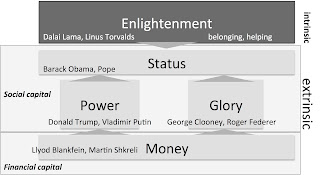 The boundary between financial and social capital is highly permeable. Wealthy people can buy higher status as so-called philanthropists by donating some of their wealth to charitable causes. On the other hand people high on social capital can convert their power and glory into financial capital. Politicians can use their positions of power to enrich themselves by selling jobs to their cronies and taking bribes. Actors, musicians, and athletes can use their glory to promote brands and products, charging hefty fees for their endorsements. And highly respected political and religious leaders can use their high-status positions to solicit donations to their organizations and themselves. However if they are too aggressive in converting their social capital to financial capital, they lose their social capital. The most admired high-status leaders lead comparatively modest lives that ordinary people can relate to. Pope Francis is one of the most globally respected leaders because he moved out of the Papal palaces into an unpretentious apartment and drives around in a Fiat instead of a stretch Mercedes car. And Barack Obama is very careful to only give paid speeches that are associated with the societal goals that he has been championing during his presidency, such as the healthcare reform.

And that leads me to the failure of Hillary Clinton to capture the US Presidency during the 2016 elections. She was highly successful in converting her position of power as the wife of a US President, Senator of New York, and US Secretary of State into high status, and then using this high status to give highly paid speeches, amassing a large fortune in the process. Unfortunately this association with financial institutions widely seen as the culprits of the 2008 financial crisis destroyed her social capital, thus making her an undesirable president for large parts of the US population.

The picture above also illustrates that there are two ways to obtain high status: either through power and glory like Roger Federer or Barack Obama, or through enlightenment, by creating a sense of belonging, and helping others. The Dalai Lama, and open source leaders like Linus Torvalds, creator of Linux, Jimmy Wales, creator of Wikipedia, and Tim Berners-Lee, creator of the Web, have all been working on a cause greater than themselves, giving up the direct way to status through power and glory, only to reach even higher status as the creators of these invaluable new technologies that have truly changed the way how we live, think, and act.
Eingestellt von pgloor 0 Kommentare

TransparencyEngine – Finding Influencers and Their Tribes


TransparencyEngine (previously called "GalaxyScope") is a new powerful and easy-to-use tool to find the most influential people about any topic on social media.

You can try out TransparencyEngine here. (You will need a Twitter account and have to login with it.) 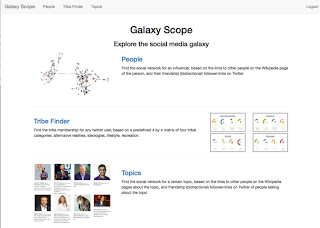 In an earlier post I described how to use Condor to run queries for TransparencyEngine. While Condor is powerful in finding hidden trends and influencers on social media such as Twitter, Blogs, Wikipedia, and Web sites and online forums, it has quite a steep learning curve. If one is not a data scientist or computer savvy otherwise, Condor can be quite challenging to extract the results one is looking for.


We therefore have developed a Web version of TransparencyEngine described in this post as a much simpler to use tool.  TransparencyEngine has been created by my colleague Joao Marcos de Oliveira as an easier-to-use alternative to Condor. Other than Condor it is embedded into the Web browser, which means that by just entering some key words in a browser window, and clicking a search button one will be able to get a result.

TransparencyEngine consists of three components, a People Map, a Tribe Map, and a Topic Map. The people map will create a social network for any person who is either in Wikipedia or in Twitter.  In the example below I am calculating the social network for Roger Federer, entering his name into the search box. 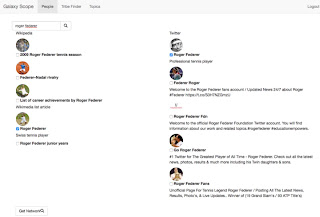 I then select the Wikipedia pages and Twitter accounts, which are about Roger Federer, and click on the “Get Network” button., resulting in the social network of Roger Federer, leading to a network which reads like a “who is who” among the top tennis players of the world. 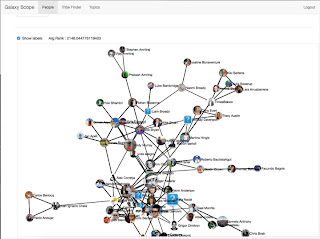 The Topic map will create a tribe of people about any topic. It uses both Twitter and Wikipedia as its main sources for finding the influencers about the topics, which means that it will find concepts that have either been spoken about on Twitter, or that have one or more Wikipedia pages. Similarly, influencers will be found from among Twitter users or if they have their own people page on Wikipedia. In other words, hidden influencers who do not tweet and do not have a page on Wikipedia will remain hidden, as the TransparencyEngine Topic mapping system will not be able to find them. The screen shot below shows the start screen of the topic map

I will illustrate creating a topic map by finding trends and trendsetters about OLED  and LG, which is a major manufacturer of OLED displays.

First I define a new tribe called “OLED” in tribefinder and add the Wikipedia pages about “OLED” “LG”, “Samsung” and “Samsung Electronics” as input for the search for tribe members.

This will add a new topic called “OLED” to the Topic maps. Clicking on the tab “Members” will show the tribe members of the “OLED” tribe. Initially it will be empty. Clicking on the tab “”Profile Description” in the search menu at left allows me to search for Twitter users who have the keywords “OLED” and “LG” in their Twitter profile description. 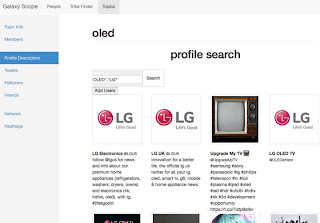 Similarly, Twitter users can be searched by keywords they are tweeting about. These users are then shown in the main part of the window, and can selectively be added to the tribe. In addition, Twitter users can also be searched among their followers and friends of the people already in the tribe (friends are bi-directional links in Twitter, where people are following each other).

Once the tribe has been created, it can be shown as a network. For this network, the tribe members are connected by their most popular Twitter friends.
The picture below shows the tribe created by selecting the most important Twitter profiles from the search in tweets and in Twitter profile descriptions for the keywords “OLED” and “LG”. 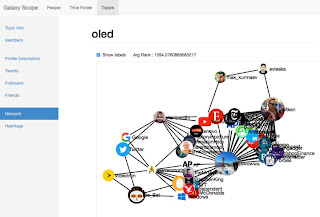 At the same time we can also look at the tag cloud by clicking on the tab “Hashtags” which is extracted from the tweets collected about the search terms, in this case the words “OLED” and “LG”. 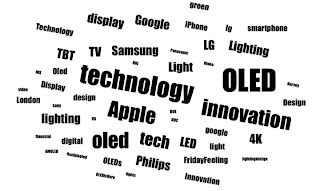 In the influencer network shown above, the Twitter profile theMrMobile is one of the most central ones. It is the Twitter account of Michael Fisher, who, according to his Twitter profile description,  produces “Mobile technology videos for the discerning gadget enthusiast”.

Entering the Twitter handle “theMrMobile” into the Tribe finder menu below shows the positioning of the tweets of theMrMobile into 16 predefined tribes belonging to the four categories “alternative realities”, “ideologies”, “lifestyle” and “recreation”. theMrMobile is categorized as nerdish, capitalist, yolo lifestyle, and sporty. 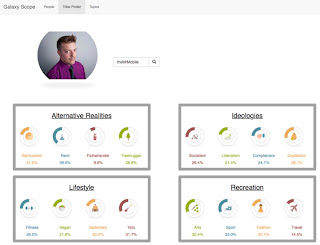 TransparencyEngine's topic view and tribe finder quickly identify the key topics around OLED, such as the smartphone displays of Apple and Samsung,  Clicking on a person in the network view, or on a tag in the hashtag view, will bring up a separate window to show the term in the original context.

The link above is to the alpha version, which  most likely still has quite a few bugs. Please test it out, your feedback is most welcome!