Creativities, Innovation, And Networks In Garage Punk Rock: A Case Study Of The Eruptörs

Francogeddon – Uncapping the Swiss Franc – a Signal of Global Consciousness?

Does an organization – and thus ultimately humanity - show some sort of consciousness or self-awareness?  One might think so, at least in moments such as on the day when princess Diana died, or more recently, on the day when I was stuck at home in Cambridge while the Boston Marathon bomber was roaming at large in the neighborhood. In those intense moments we feel maybe not “collectively intelligent” but certainly “collectively aware” or “collectively conscious”. If we meet a stranger in those moments, we know what they are thinking, namely “it’s so sad Diana died,” or “where might the marathon bomber be hiding and hitting next”. Moments like these motivate an informal definition of “organizational consciousness”. It is analogous to the human body, where the brain is conscious of the toe, and will respond differently depending on whether a person hits her toe at the door, or somebody else steps on her toe. Extending this metaphor, a “collectively conscious” organization will respond differently if somebody hits a member purposefully, or if a member hurts her/himself. Similarly to the neurons in the brain that are communicating through their synapses to create consciousness, humans communicate by interacting with each other verbally, through text, or other signals, either face-to-face or over long distance by phone or Internet.

As an example of a global level event, in the case of the Boston Marathon bomber, everybody in the Boston area was trying to stay abreast of the most recent developments on Twitter, Facebook and the News, and looking out for traces of the terrorists. On the organizational level, a well-oiled team of software developers working together closely f2f, using chat, or using e-mail trying to debug a jointly developed application also shows a high level of organizational consciousness, as they are able to coordinate their work with minimal use of words.

Our aim is trying to make this implicit understanding more measurable, similarly to brain researchers, who measure individual levels of consciousness by attaching probes to individual neurons, tracking the electrical flow of current flowing through synapses between the neurons. In our work, we measure interaction among people through online media such as e-mail, Twitter, Facebook, and blog posts, applying a framework of “six honest signals of communication” that was introduced previously.

In this blog post I would like to illustrate global consciousness by the example of Francogeddon. On January 15, 2015 financial markets were in turmoil. In a surprise move – later termed Francogeddon - the Swiss National Bank removed the artificial exchange rate of Swiss Franc 1.20 to the Euro, which it had set and defended by buying massive amounts of Euro and Dollars since September 6, 2011. Within hours the exchange rate between Euro and Swiss Franc fluctuated from 1.20 Francs per Euro to 95 cents per Euro, leading to massive losses at stock markets around the world, forcing hedge funds into insolvency.

Such an unexpected event at the financial markets offers a unique natural experiment to measure global consciousness of financial markets. Using Condor, I collected the most recent 12,000 tweets containing the string “Swiss Franc”, as well as another 12,000 tweets each containing “Euro” and “USD” on January 18, when Francogeddon was still a major issue, and currencies were still fluctuating wildly. I repeated the data collection at two later points in time, on February 3 and February 6, 2015, when Francogeddon was over, and things had settled down. This 9-part dataset allows me to compare a moment of high public consciousness, when Francogeddon was at the top of everybody’s minds involved into currency trading with a baseline of two later points in time when the event was over and public consciousness should be low again. 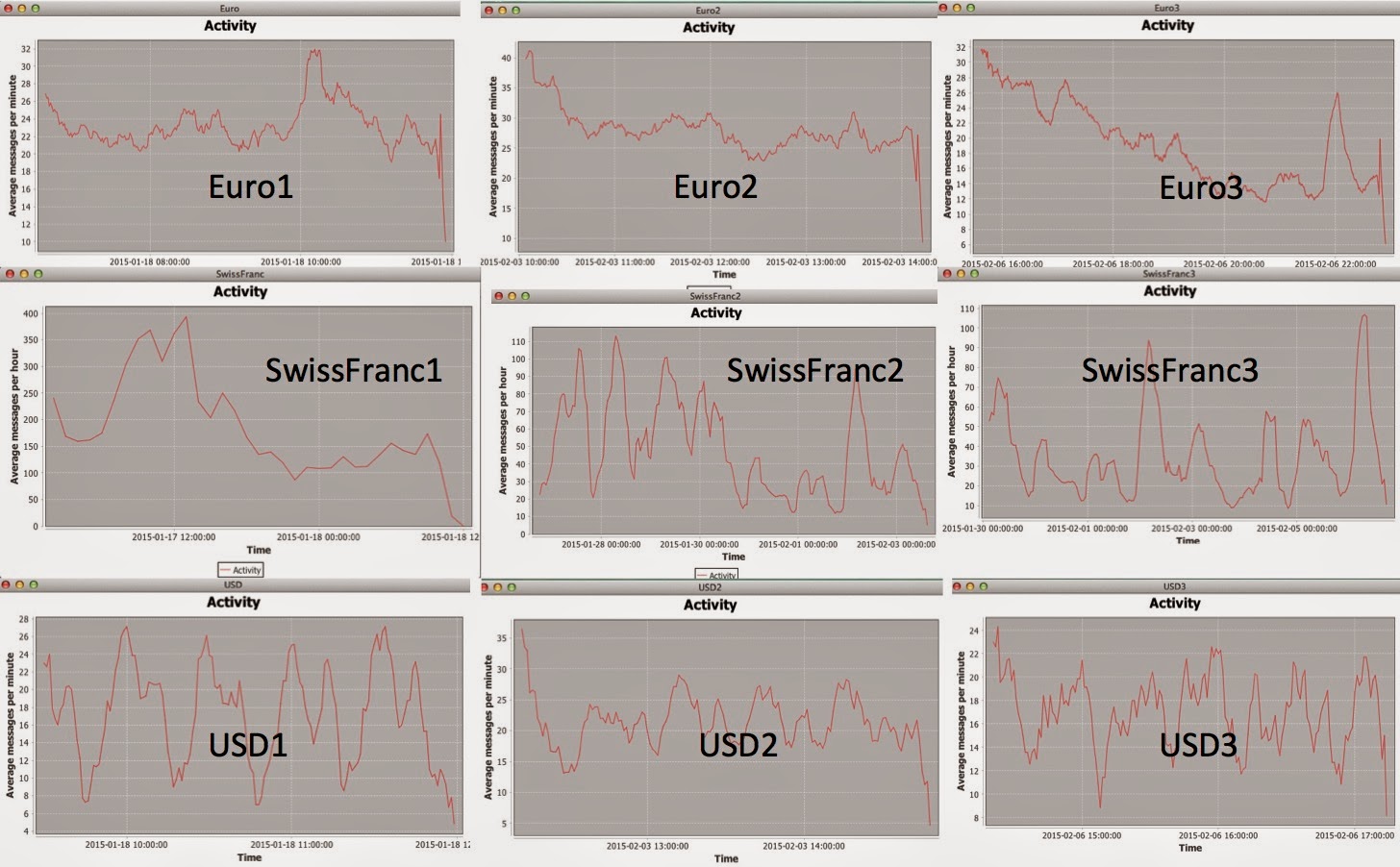 The 9 charts above illustrate the activity of the tweeters on these three days. While the tweet activity about Euro and USD is about the same on all three sampling days (20 to 30 tweets per minute), tweet activity for Swiss Franc is about 200 tweets pro hour on January 18, dropping to 50 tweets per hour on February 3 and 6.

The picture below shows the network structure of the three currency twitter networks on January 18 and February 6. Each node is a person tweeting, a link is added between two nodes if one person is mentioned in the other’s person tweet, or one person is retweeting the other person. 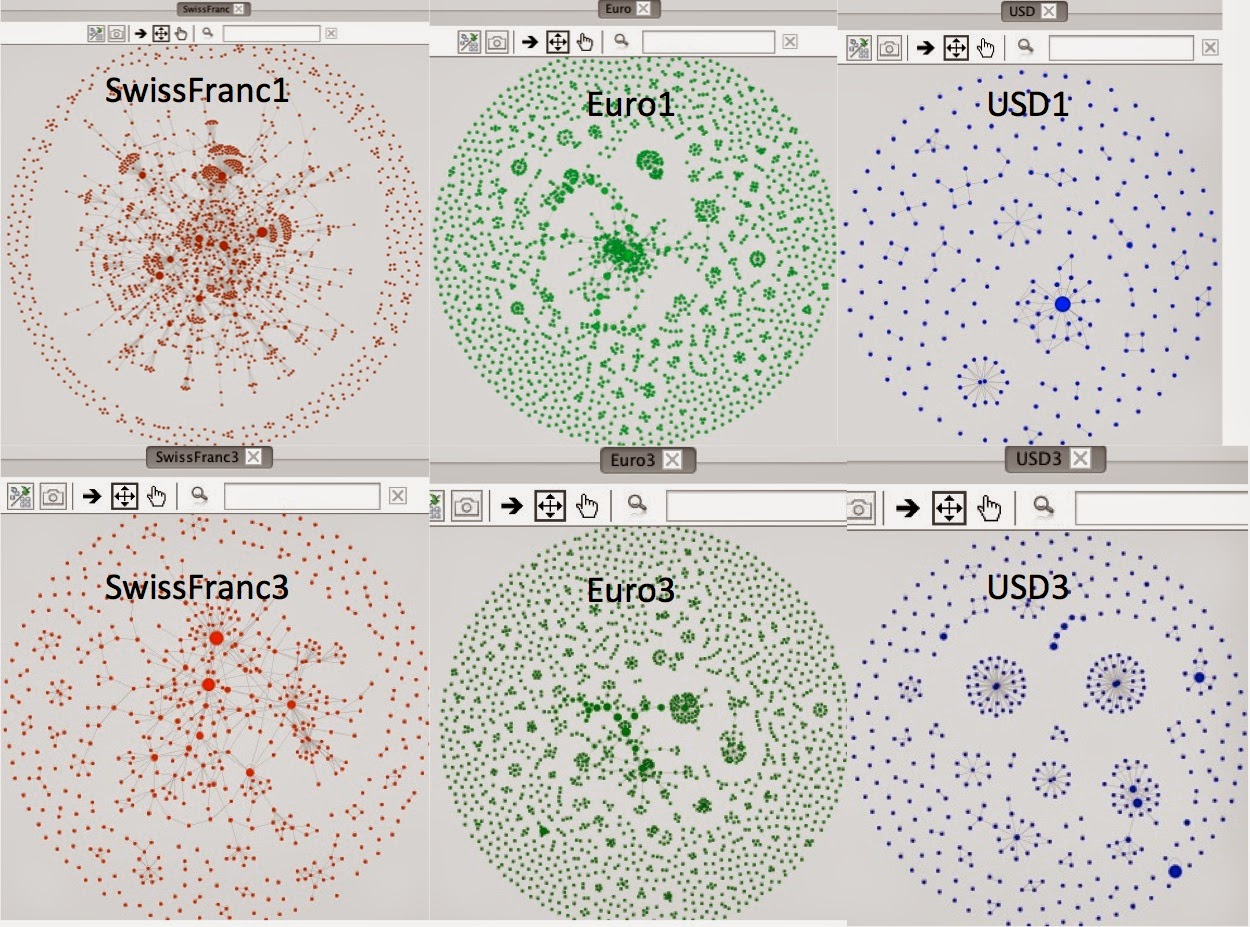 The Word Clouds for the 6 networks depicted in the picture below show what people are tweeting about. 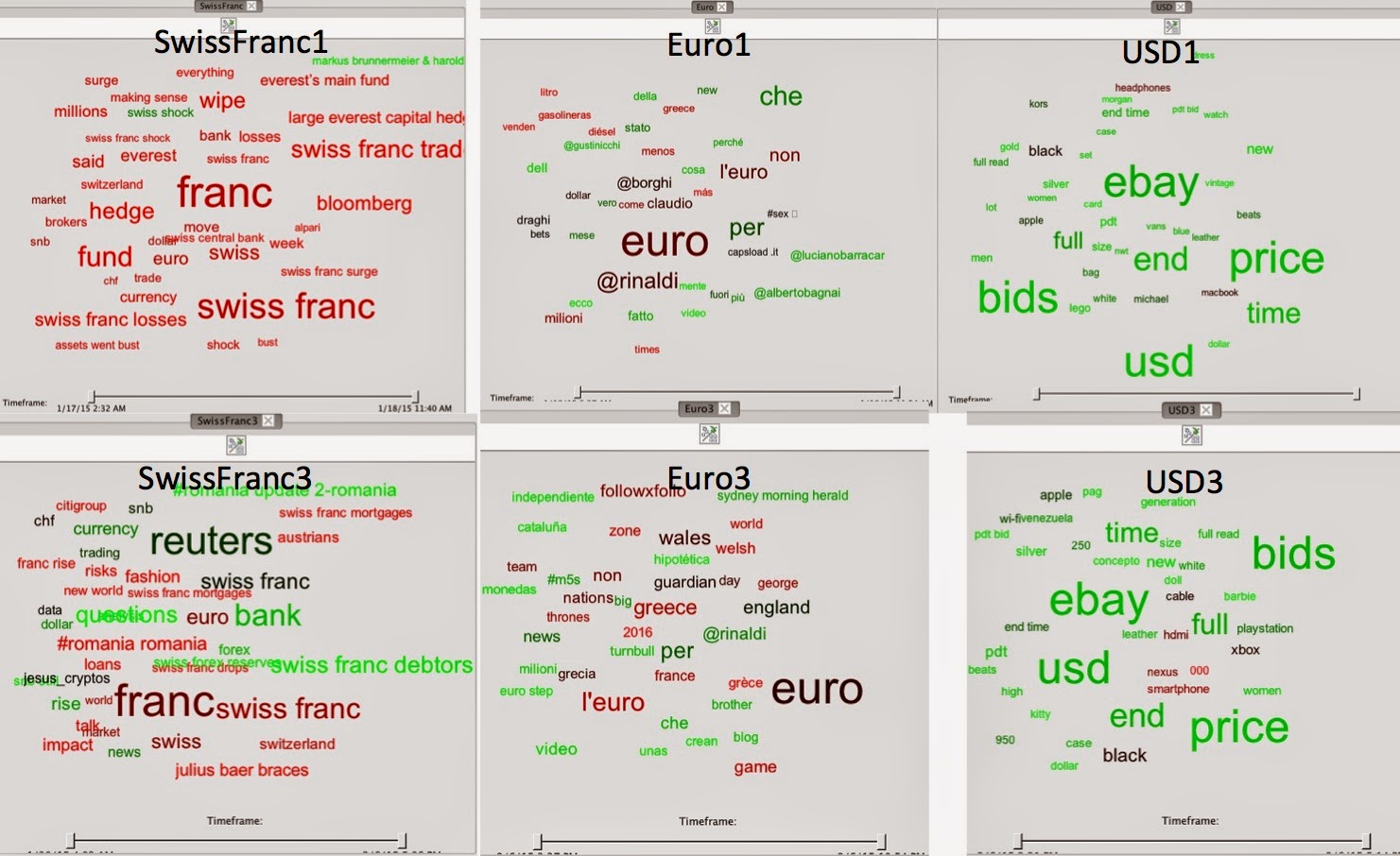 While the sentiment about the Swiss Franc on January 18 is overarchingly negative (the darker the red of a keyword, the more negative its context), it is somewhat negative for the Euro tweets, and almost exclusively positive for the USD.  The Swiss Franc tweets on February 6 are becoming more positive,  but still mostly negative, as a lot of people in Eastern Europe, particularly in Poland, but also in Rumania and Austria, complain about taking out mortgages in Swiss Franc, which now ballooned against their local currency. A look at the USD tweets on both January 18 and February 6 shows that they mostly consists of retweets of items auctioned on eBay. This illustrates that the US tweeters don’t care much about Francogeddon. Tweets about the Euro are somewhat negative, but the concerns – which are growing on February 6 – are more about Draghi and the possible Grexit, i.e. the exit of Greece from the Eurozone.

So let’s now look at the six honest signals of communication calculated for the nine datasets:
(1) Group betweenness centrality (how centralized are the tweet networks), (2) oscillation in group betweenness centrality (how much is the centrality of individual tweeters in the network changing over time, measured in 15 minute intervals), (3) average weighted variance in contribution index, i.e. how much are individual tweeters being retweeted over time, (4) average response time and nudges,  which tells how long it takes for a tweet to be retweeted, and if people are mutually retweeting each other, (5) sentiment and emotionality, which shows how positive and negative the tweets are, and (6) complexity of language.

The charts below illustrate the changes over the three points in time in emotionality, average response time (ART), and number of nudges per tweeter. For example, the response time (ART) drops considerable for USD from January 18 (day 1) to February 6 (day 3), while it goes up for Swiss Francs. This means things are cooling down for tweets about Swiss Francs, and it takes more time until they are retweeted. 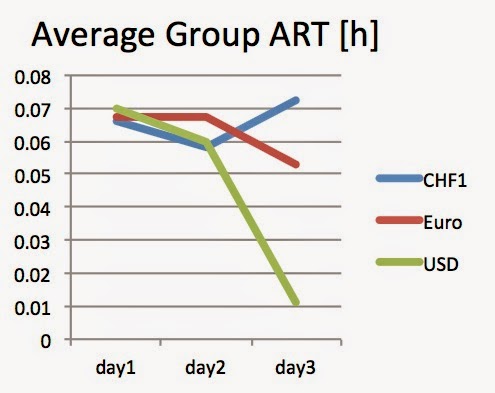 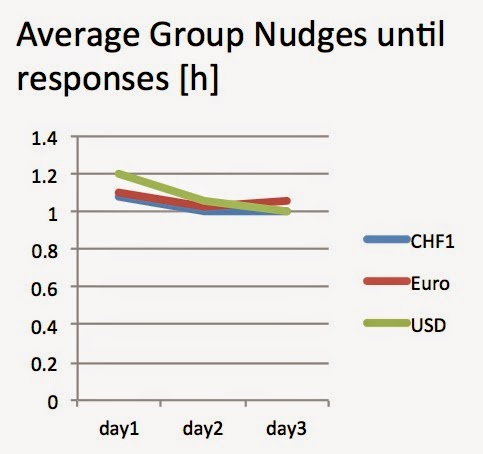 Comparing the six honest signals of communication for the three currencies, we see that even for this small sample, using the Mann-Withney U-Test, tweeting behavior about Swiss Franc is different from tweeting about Euro and USD with regards to the number of nudges until one tweeter responds to another tweeter. 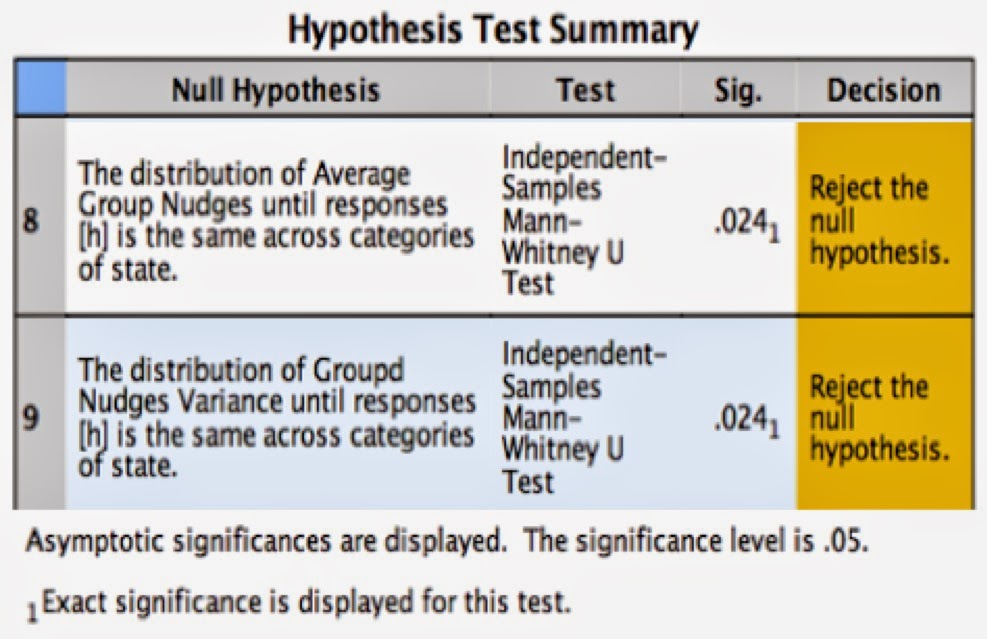