Newt or Mitt – the sequel - Florida

We did some more coolhunting on Twitter over the last few days to check out if the negative advertising blitz against Newt Gingrich that Mitt Romney is running right now in Florida has any impact on the Twittersphere. The answer is “Yes, by all means”, which explains why even in the Romney tweets Gingrich is the most prominent word in the term view, and Gingrich is much more central among twitterers than Romney in the combined Romney-Gingrich view in Florida.

To measure that, we collected 4 twitter maps:
1. All the tweets in the US about Gingrich and Romney: 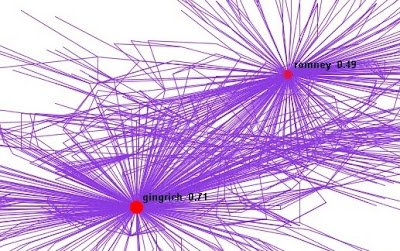 As we can see, the twitterers about Gingrich tweet more, and they are also more important. The purple lines are the retweet network containing the words “gingrich” or “romney”.

2. All the tweets in Florida about Gingrich and Romney:

This picture has been computed using Condor’s term view, and it shows the most important words and their connections in the tweets containing the word “gingrich”. It’s the things we might expect, such as the endorsements of Cain and Palin, and the names of some influential twitterers. Mitt is in the picture, but he plays a comparatively minor role.
But when we look at the contents of the tweets about Romney, in Florida the picture is entirely different:

The term “Romney” does not even show up in his own term network! Rather we seen the term “gingrich” , and some discussion in Spanish about “Goldman Sachs”.

When we look at the term network of all the tweets about Gingrich, coming from all the states in the US, a similar picture emerges:

Gingrich is very central, surrounded by the other candidates and endorsers. Mitt and Obama play a very small role. It seems Gingrich is the focus of his own campaign (for now). This is very different, when we look at the contents of the tweets from all of the US about Mitt Romney: 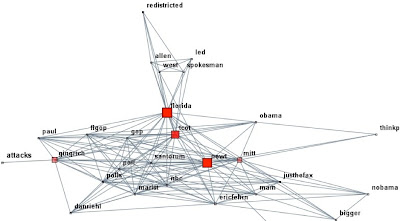 Newt is more central than Mitt in the tweets about Romney. Florida is the key topic, together with the attacks against Gingrich.

3. All the tweets in New York about Gingrich and Romney 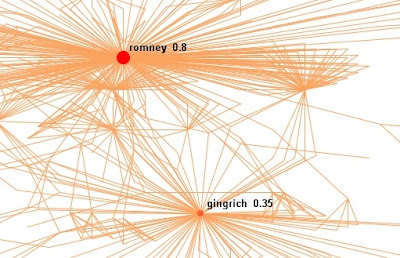 In this twitter influence network, influencers talk far more about Romney than they do about Gingrich. This raises hopes for Romney in New York.

4. All the tweets in Massachusetts about Gingrich and Romney 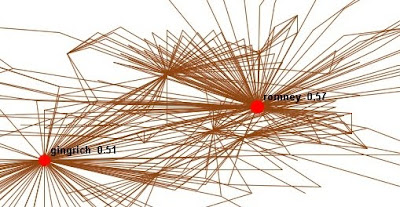 The same picture emerges in Massachusetts, where “Romney “is more popular among the influential tweeters than “Gingrich” in the retweet network. But no reason for Romney to celebrate prematurely, this can change quickly, as the primary in South Carolina has shown.
And as the in-depth analysis of the Florida retweet social network has shown, a central position in the network can just mean that people talk a lot about the candidate, both in the positive or negative sense.

A key question is if centrality in the twitter network really translates to high popularity in the real world. After all, there is a larger fraction of voters who do not use twitter, and still follow conventional print media and TV. But the point is that these non Web-active voters are influenced by the active tweeters. These twitter-activists are journalists, campaign managers, and other political advocates, who will sway the public one way or the other. In that sense, twitter acts like a probe, or a crystal ball, with an in-depth view into the innards of the public mind, while it is being shaped and formed.

Many thanks to Paulo Rodrigues Espeschite Arantes for doing the coolhunting with Condor.
Eingestellt von pgloor 0 Kommentare