In my previous blog post I introduced the three big virtual tribes of our Western world, which I called the Jingoists, Progressives, and Treehuggers. In more popular terms, the Jingoists can also be called the “Fatherlanders”, as they believe in God and the Fatherland, while “Nerds” is another term to describe the Progressives, whose religion is science and technology.  Each of the three tribes has their distinctive leaders and role models.

The Fatherlanders look up to Donald Trump, who promises to makeAmericaGreat again, cutting back on almost everything inside the fatherland except on a strong army and building a wall around the fatherland. The Nerds identify with science geeks like Elon Musk whose goal in life it is to bring humanity to the Mars. The treehuggers admire Pope Francis who is organizing conferences about global warming and climate change in the Vatican.

The resulting network for each of the three tribal leaders looks very similar, below is the picture for Elon Musk as an example. 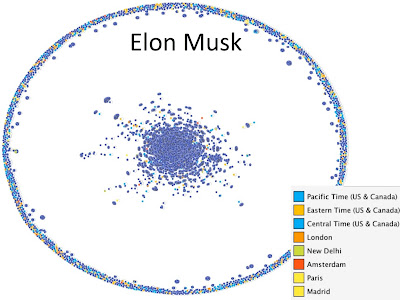 We get a big connected component in the center of the network, this is the active tweeters retweeting and mentioning each other. In the periphery, we have the “asteroid” belt”, made up of the “nobodies”, tweeting their lungs out about “Elon Musk”, while nobody is listening. The coloring tells us that the largest groups of tweeters are from the US Pacific, Eastern and Central Time zones.

Zooming in on the connected component leads to the following picture. Coloring of the actors (the people tweeting) is by using Condor’s cluster detection algorithm to find the largest subgroups. 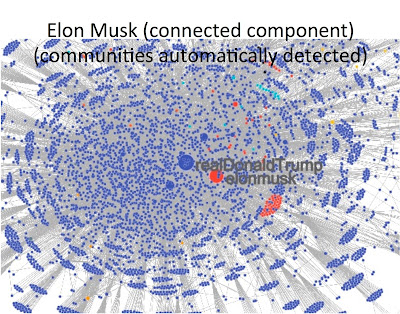 The most surprising finding in this picture is that although I have been collecting tweets about “Elon Musk”, the towering presence of realDonaldTrump is overbearing: he is more central (size of the nodes is by betweenness centrality) than even elonMusk.
Showing the same picture for Pope Frances leads to the same conclusion: 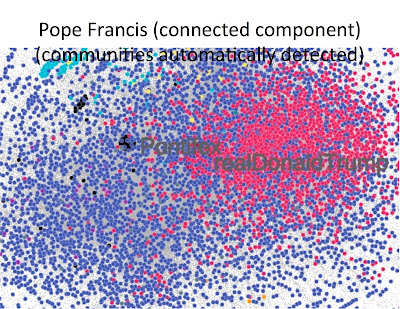 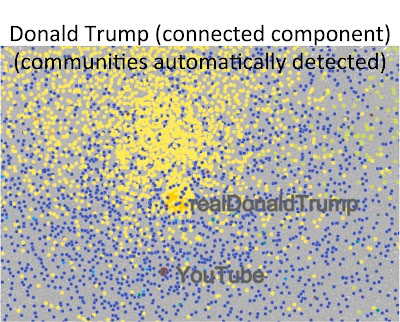 The realDonaldTrump dominates his own network, surrounded by his tribe (in yellow). The only actor who can keep up with the realDonaldTrump is “YouTube”. Or in other words: Donald Trump’s entertainment value is unsurpassed these days!

Looking at the contents of the Tweets in each of the three Twitter networks confirms the picture. Here is the most frequent words in the Tweets collected about “Donald Trump”. Not surprisingly, Trump (in green, this means he is seen quite positive) dominates as the “top story”. 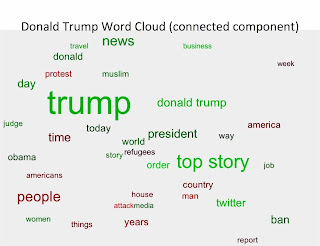 Looking at the word cloud about the Pope, Trump (in green) is far more important than the “pope”, “jesus”, and “god”. 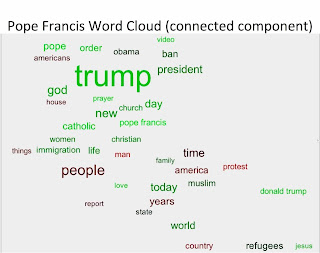 Looking at the word cloud of Elon Musk, Trump “trumps them all…” again, with “Elon Musk” being rather small even in his own word cloud, technology words such as “app”, “techcrunch”, snap”, “google”, “apple” show up quite prominently instead. 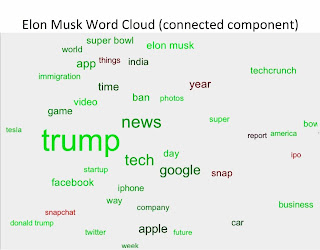 Honest Signals of Communication
Let’s now have a look at the hidden “honest signals” of each of the three tribes. See for example my Youtube video for an explanation of these.

Looking at the density of the network, we see that Trump’s retweet network is the most connected, while the Musk network is quite unconnected. This means that whatever is said about Trump triggers a lot of responses, with tweets about the Pope being a close second, while tweets about technology do not raise much traffic. 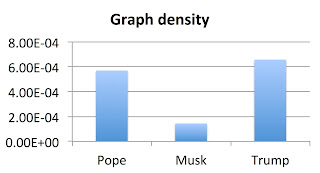 Looking at the other social network metrics, this is confirmed by the analysis of emotionality and sentiment. All three tribes are over the happiness threshold of 0.5 (which is neutral sentiment), with the Nerd tribe of Musk being the happiest, but also the least emotional one. AWVCI (Average Weighted Variance in Contribution Index) is a metric for the level of group flow, the lower AWVCI is, the more the group is in synch. We find that the Trump tribe has the highest internal turmoil (highest AWVCI). The Fatherlanders also show the strongest central leadership by degree and betweenness centrality by its two leaders realDonaldTrump and YouTube. 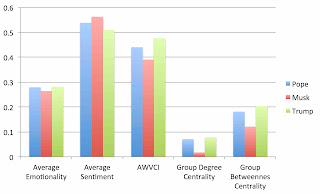 The last comparative chart shows the passion and respect measured as speed of response in retweeting, the Fatherlander tribe has by far the fastest response time at about 12 hours on average, which makes it the most passionate. How quickly others retweet is a proxy for respect, here the Treehuggers lead by a small margin over the Fatherlanders. On the other hand, Nerds need the least nudging, on average just a bit more than one tweet, until somebody responds, while the Fatherlanders and Treehuggers who respond (there is a large group that does not respond at all) only respond on every second tweet.


Finally, we also find that the Nerds are using more complex language than the Fatherlanders and the Treehuggers, as can be expected when talking about complex technology topics. 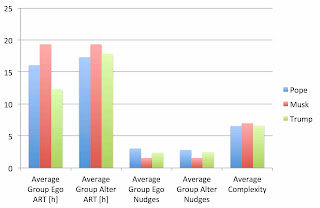 To resume, we find that the Fatherlanders, led by Donald Trump, are on a roll, but show a lot of internal turmoil. The Treehuggers are very much dominated by the Fatherlanders, as they share a similar vocabulary and communication structure. In comparison, the Nerds seem to live on a more peaceful planet, with less internal turmoil, dominated by high-tech and stock market discussion, but also visibly influenced by Donald Trump as shown in their network picture and word cloud. In conclusion, we find two spheres of collective consciousness, one occupied by Fatherlanders and Treehuggers looked in an mutual struggle, and a second one, the Nerds, also strongly influenced by Donald Trump, but running on its own rhythm.
Eingestellt von pgloor 2 Kommentare