Yesterday’s New York Times profiles Intrade.com, a prediction market and betting web site in Ireland. The article makes the point for the wisdom of crowds, where swarms of people putting their money where their mouth is are better in predicting outcomes of political elections than the official polls of TV stations and the like.
For example, in the 2004 presidential elections, Intrade correctly predicted the outcome in all 50 states. For the 2008 elections, bets are on…… Hillary Clinton and John McCain as the Democratic and Republican frontrunners (see Intrade snapshots of yesterday) 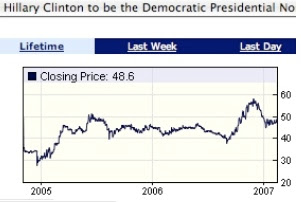 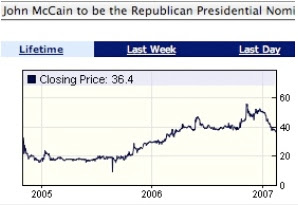 The article got me curious to see what the Web predicts. I ran a TeCFlow coolhunting query on the leading presidential contenders over the last 40 days. The results were somewhat different from Intrade: 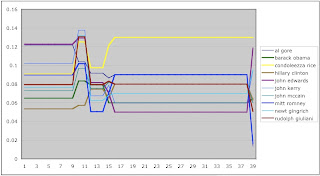 The first point to notice is that there is no clear frontrunner, at least by Web buzz. Hillary is not doing too well, John Edwards is spoken about more, while Mitt Romney displays a weakness attack even after the day he officially announced his candidacy.
Looking at the snapshot picture of the movie showing the centrality of the candidates is a little bit more insightful:

Hillary Clinton, Barack Obama and John McCain are all about similarly central, while John Edwards has a higher centrality value, he is not part of the central cluster. The "kingmaking" Web sites are still time.com, the New York Times, Ovaloffice2008, and blog search engine Technorati. All the candidates are eclipsed, however, by non-candidates Condoleezza Rice and Newt Gingrich.
Click here to see the QuickTime movie (8.6MB). (Explanation: the numbers behind the names of each candidate depict his/her centrality at any given point in time, the closer two candidates are located together on the screen, the stronger their connection.)
Eingestellt von pgloor 0 Kommentare

How to kill Collaborative Innovation

According to today's New York Times Indonesia stopped giving its samples of the H5N1 avian flu virus to the WHO, instead selling it to US vaccine company Baxter. Indonesia has had more lethal cases of avian flu than any other country, about 70 in total. In the past, samples have been given to the World Health Organization, which has passed them on to research labs and pharmaceutical companies. If Indonesia does not change its mind, only Baxter will get the chance to produce a vaccine against this strain of avain flu - swarm creativity gets no chance here!
Eingestellt von pgloor 1 Kommentare