We have no clue yet how far Bernie Sander’s campaign to become the next President of the US will go, but what is sure is that the process of how it is unfolding is a great story of COINs.
For a start, the entire progress of the campaign is documented online, on reddit, from its humble beginnings, to the prominence of September 2015.  In December 2013 the reddit forum SandersForPresident  was started, and four month later, on April 30, 2014, also on the same Reddit forum, Sanders announced his candidacy:


“Reddit -- I am running for President of the United States, and seeking the Democratic nomination. I need you to stand with me and organize an unprecedented grass-roots campaign. Are you in? –B”

In true COIN fashion, it was three people forming the original reddit COIN, by the reddit sceen names Vermonty_Python, IrrationalTsunami, and scriggities who created the SandersForPresident forum.

Making excellent use of social media, Sanders is a heavy user of Reddit, Twitter, and Facebook. The reason why he resonates so much on online social media is that he has been very consistent in his message for the last 30 years. As of September 2015 he is closing in on Hillary Clinton, until recently the undisputed front runner as democratic presidential candidate. As of September 2015 Sanders is leading in the critical early voting state New Hampshire and a close second in Iowa.

The hundreds of thousands of people on reddit, Facebook, and Twitter form a perfect CLN (Collaborative Learning Network) learning about Sanders’ viewpoint. Some of them even self-organize their own COINs to further Sanders’ cause. For instance, Sanders succeeded in tapping into the Web savvy of young IT professionals, with whom his message of Northern European style social democracy resonates very well. 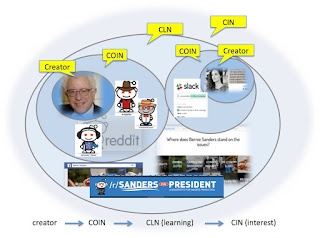 Jumpstarted by a young IT professional in NYC, hundreds of software developers volunteered their time, energy, and creativity to create all sorts of social media apps, Websites, and idea tracking tools. Titled “A legion of tech volunteers are leading a charge for Bernie Sanders” the NYC describes how this group created a Website “FeelTheBern.org”  to showcase Bernie Sander’s position on key issues. They coordinate their work using the communication tool “slack” , moonlighting and contributing their skills to create interactive maps, donation collection apps, and grassroots organizing tools.

After all this amazing COINs-based grassroots organizing, I was curious to compare the social media footprint of the campaign of Bernie Sanders with his counterpart on the right spectrum of the political landscape, Donald Trump, and contrast it with their more established competitors Hillary Clinton and Jeb Bush. In a nutshell, the two outsiders Sanders and Trump, at least right now, share the spotlight, while the two candidates of the establishment, Hillary and Jeb Bush, are badly trailing not just in the polls, but also on social media.

I started by comparing the global Twitter footprint of the four candidates. On September 6 I collected the most recent 4000 tweets about “Bernie Sanders”, “Hillary Clinton”, “Donald Trump”, and “Jeb Bush”. I also collected an additional 4000 tweets with their most popular hashtags #feelthebern, #Hillary2016, #makeAmericaGreatAgain, and #jeb2016. 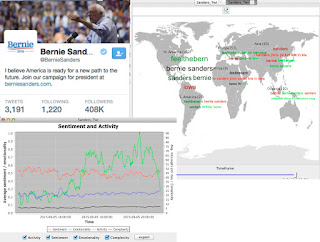 As the curve above tells, the messages are quite emotional, and just above the positivity line.  There are also quite a few people around the world tweeting about Sanders. And, quite importantly, the tweets are about Sanders and not his competitors.

The next picture shows the tweets about Hillary: 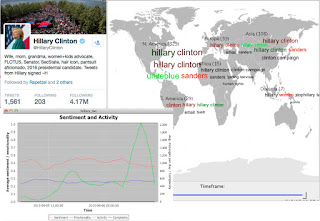 Other than Bernie Sanders, Hillary, while also having a global presence, is strongly dominated in the US by topics other than herself. Besides Sanders showing up in tweets about Hillary, “unitedblue”, a grassroots campaign against SuperPACs (organizations sponsored by wealthy individuals circumventing US election sponsoring restrictions) is also quite prominent. In true celebrity fashion, Donald Trump succeeded in making himself the topic of his own campaign. However all the positivity of his campaign comes from outside the US, while the sentiment of his US tweets is very negative, strongly influenced by his attacks against the Latin minority and illegal immigrants in the US. 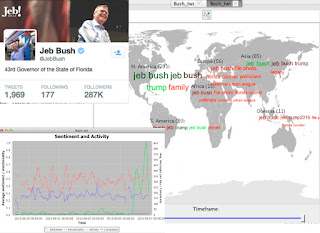 Jeb Bush is currently in the weakest position of the four candidates. Even in his own Twitter feed Donald Trump features prominently, and overall his tweets are scattered and not very positive.

The next picture shows the tag clouds of the tweets of the four candidates. 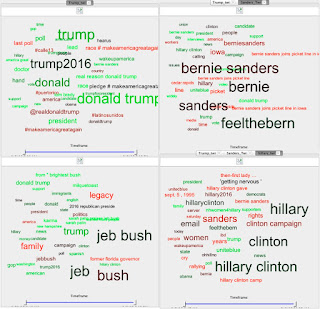 Hillary and Jeb are dominated by their opponents. Trump’s feud with the Hispanic immigrants shows up prominently. The positive emotions (the green color of the words) in Trump's tag cloud comes from his hashtag #makeamericagreatagain where our system picks up "great" as a positive word. There is hope for Hillary, because she shows up an all four tag clouds. The outlook for Jeb Bush, however, is not good. Even on his own tag cloud, his greatest assets is not his own achievements, but his family.

Next I looked at the importance of the four candidates on Twitter. The picture below shows the tweets for each candidate in one color. It also measures the betweenness centrality of each candidate, drawing a line to the search terms “Bernie Sanders”, “Hillary Clinton”, “Donald Trump”, and “Jeb Bush” and  #feelthebern, #Hillary2016, #makeAmericaGreatAgain, and #jeb2016. 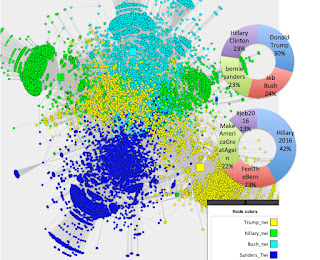 Owing to his celebrity status, Donald Trump has the highest centrality in the Twittersphere. However Hillary’s hashtag #hillary2016 is the most prominent.

I repeated this analysis, this time filtering out all negative tweets, only keeping the ones that the automatic sentiment analysis function of our tool Condor categorized as above 0.5, i.e. having positive sentiment. Condor automatically recognizes sentiment in English, Spanish, German, French, Italian, and Portuguese. 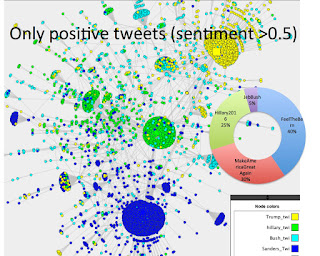 The first thing we notice in the new chart is that the network has much less nodes (i.e. people tweeting), and the structure falls apart. Jeb Bush drops out almost completely, among the other three candidates Sanders' #FellTheBern hashtag becomes the most central.

Next I used Condor’s influencer function to calculate the most influential twitterers for each candidate. Condor looks at word usage among twitterers. If somebody introduces a new word which is picked up quickly by others it makes her or him influential. 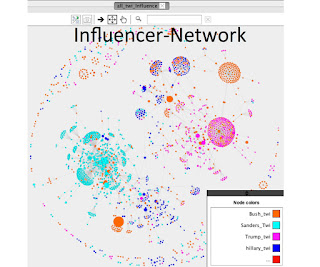 We again see that Bush has very few influencers, while the Sander’s group is highly creative, coining their own vernacular, and busily retweeting it in their own sphere (the turquoise cluster a lower left).

Finally I repeated the same analysis on the Web, constructing a degree-of-separation search with Condor. This search identifies the most prominent Websites for each candidate, and then constructs the Web link structure between these sites. 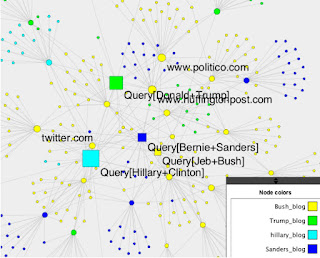 I only took Websites that have been updated in the four weeks before September 6. The picture spells good news for Hillary, as she is most central on these blogs, followed by Donald Trump. Huffingtonpost, Politico, and Twitter are the most important sites boosting the centrality of these candidates.

In sum, it seems right now that both Hillary Clinton and Bernie Sanders have reason to be optimistic, with Sanders leading the creative and optimistic crowd on Twitter, and Hillary being the strongest brand among the establishment.
We still have to wait over a year until we know.