Who will win the 2010 Oscar – Early predictions?

March 7th, 2010, the 82nd Academy Awards, commonly known as Oscars, will be given out for best picture, for best actor and actress, and in 21 other categories.
Two years ago we successfully predicted who would win an Oscar Award, almost two months before the Awards were actually given out. This blog post contains our first predictions for the 2010 Oscars, more than three months before the Awards will be actually given out.

There are other places on the Web also making Oscar predictions, for example movie site moviefone and Internet betting site intrade: 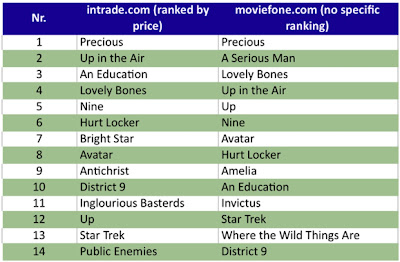 While the above predictions are made by experts (moviefone) and people placing bets on the outcome (intrade), our approach simply measures what the Web (this means all of us) thinks. It works by multiplying the “how many” with the “who”, i.e. multiplying what somebody says with her/his influence.
Below are our combined coolhunting results, based on evaluating the buzz in the Oscar Forum in the Internet movie database imdb.com and on running queries for [moviename] & “Oscar 2010” on the Web and in Blogs. 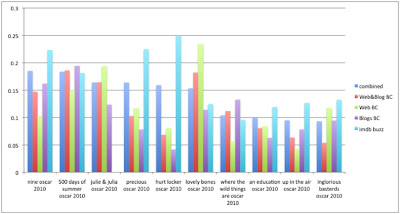 The light blue bar in the above chart is based on the buzz in the Oscar forum in imdb.com (see table below) 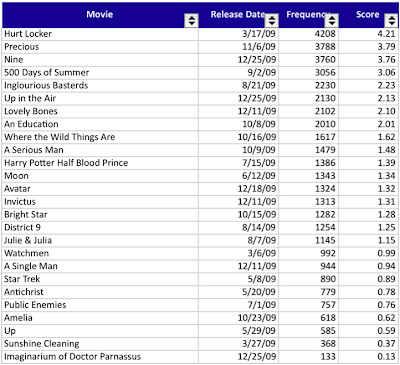 The second half of the prediction in the bar chart above is based on the betweenness of the movies on the Web and on Blogs. To illustrate this approach, below is the Blog network for the query [moviename] & “Oscar 2010”. If we wanted to drill down and predict which Oscar a movie might get, for example “Best Picture”, we would rerun the query as [moviename] & “Oscar 2010 Best Picture”.

Here are the predictions for best actor/actress, based on the discussion in the Oscar forum on imdb.com: 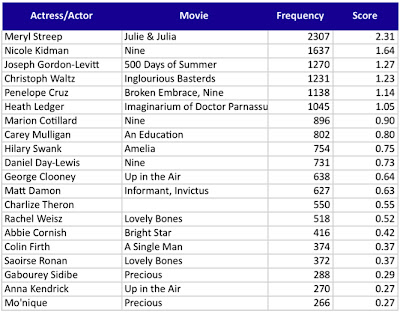 Obviously, 2009 is not over yet as some films are only coming out in December, and so things might still change. We will rerun the calculations at the end of 2009 to get more accurate predictions.
Eingestellt von pgloor 2 Kommentare