Who matters in the Arab World (taken from Wikipedia)

In earlier work we have constructed people maps based on their linking structure in different-language Wikipedias. Articles about people in Wikipedia include many social cues about a particular person. By using this information, we create a social network of people listed in the Wikipedia article. We only look at links from one people page to another people page. The links between these pages convey a rich social context, such as friendship, animosity, communication, or having participated in the same events, for example. The meaning of a link includes relationship information about a person, for instance, with whom they have worked as well as basic demographic information such as when and where the person was born. We have compared the English/ German/ French /Japanese/ Chinese/ Spanish/ Korean people maps, with substantial differences on who matters in what culture. In the meantime, we have been lucky that Sar Haidar, a native Arabic speaker, agreed to repeat the analysis for the Arabic Wikipedia. 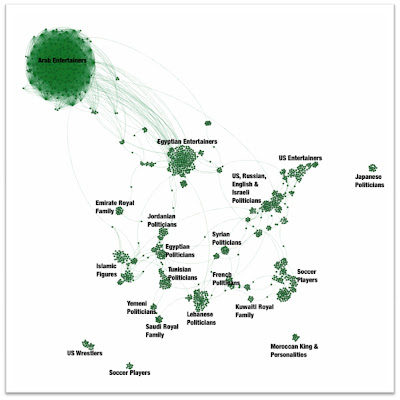 Arab actors have highest centrality and seem to be the most prominent. Egyptian entertainers while part of the Arab Entertainers (mainly actors), form their own separate cluster. It’s interesting to note that the Arab entertainers are highly connected with one another and seem to have worked on a lot of the same projects, less so the Egyptian entertainers.
Apart from entertainment, politics play a major role and thus some clusters are formed by Arab and foreign politicians and rulers. In addition to politics, Islam plays a major role in the Arab world and a cluster of Islamic figures is clearly distinguishable. Last but not least, soccer is the national sport and is represented by a cluster of international players.
Eingestellt von pgloor 0 Kommentare

It's nice to get confirmation of what I had found for the last six years from other sources!

Thanks to Sar Haidar for pointing out the article.
Eingestellt von pgloor 0 Kommentare