Who Is More Altruistic - the Americans/English or the Germans

Today I played around with Google ngrams. In particular, I was curious how the popularity of the two concepts "altruism" and "egoism" developed over the last one hundred years. It turns out - at least among the English speaking writers - that there was a tipping point around 1978, where the egoists became a minority, and altruists became more popular. Unfortunately, altruism peaked in 1998, and has been going down since then. There is a bit of hope, however, as towards the very end it seems to be picking up again. 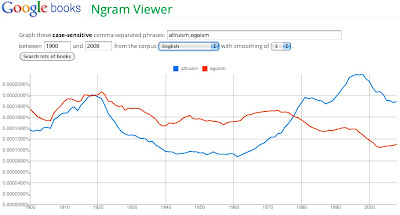 For the sake of comparing the different cultures, I then ran the same query in German, using the German words "Selbstlosigkeit"(altruism) and "Selbstsucht" (egoism). Here are the results: 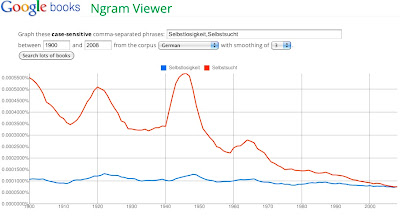 It's very different! For the most part of the last century, the Germans were obsessed with egoism. Altruism has basically stayed flat over the last one hundred years, while egoism peaked during the two World Wars. At least German egoism (to be more precise: use of the word among German writers) has been coming down from its peak during the Second World War, currently altruism and egoism seem to be on the same level.
Eingestellt von pgloor 0 Kommentare