Mitt or Barack? Who is more popular on the Web?

Today I decided to do some mid-term presidential elections coolhunting. Looking at the exchange of negative attacks between Barack Obama and Mitt Romney, I was curious if I would see some reflection of this on Twitter, Blogs, Web pages, and online News. According to realclearpolitics aggregated polls, Obama was ahead in the polls today with 47% against 44.6% for Romney. The picture below shows today's tweets containing "obama president 2012" and "romney president 2012", confirming the polls: 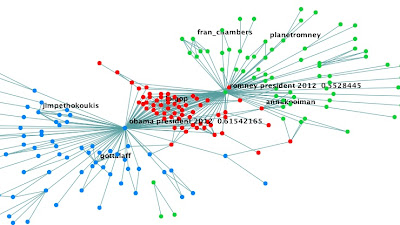 I then did another Condor coolhunting for the same search strings "obama president 2012" and "romney president 2012" combining the Web, Blog, and online News link networks of the search results returned by Bing, Bing News, and Google Blog Search.

As the betweenness numbers in the picture above show, Obama also beats Romney among bloggers, general Web sites, and News articles. Each connecting line is a link pointing from one Web site, blog, or news site to another. I then calculated betweenness centrality of these Web site, listed in the bar chart below: 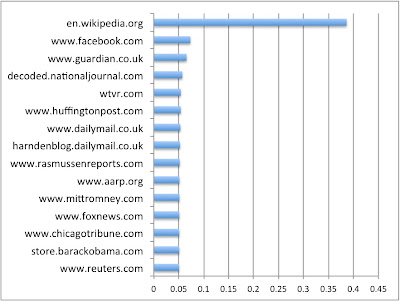 Wikipedia is by far the most influential Web site for presidential elections, with Facebook as a distant second. Surprisingly two UK newspapers, the Guardian and DailyMail easily make it into the top web sites, together with US news Web sites. Mitt Romney's Web site beats Barack Obama's online store, but AARP's Web site, catering to senior citizens, beats them both. My conclusion, at least for today, is that things on the Web, just like in the polls, don't look too good for Mitt Romney. But there is still a long way to go until November 6.
Eingestellt von pgloor 0 Kommentare

The more active Wikipedia Editors a country has, the better is the health of it's economy!

In this project we find a relationship between intrasocial capital of countries and the structure of the Wikipedias of the matching European languages. In the context of the current economic crisis we compare success of an economy with the Wikipedia editor behavior of the corresponding country. The German, French, Italian, Polish, Dutch, Greek, Swedish, and Finnish languages are predominantly spoken in just the mother country, allowing for a one-to-one mapping between Wikipedia in that language and economy of the mother country. We obtained different metrics reflecting Wikipedia structure for each of these languages on July 5, 2012: total number of articles, total number of edits, the number of all users, and the number of active users (i.e. editors who have performed an edit in the last 30 days).

As our first measure of success of an economy we take intrasocial capital in the form of the corruption index by country from http://www.transparency.org/country. Scores range from 0 (highly corrupt) to 10 (very clean). As a second measure of success we take the sovereign credit default swap (CDS) rate the countries have to pay for 5-year protection on a default on their loans on July 5, 2012. The table above contains the basic numbers. For our comparisons, we normalize the Wikipedia metrics: total number of articles, total number of edits, the number of all users, and the number of active users are divided by the population of the country, to get the number of articles, total number of edits, number of all users, and number of active users per 1000 inhabitants per country.

The picture above visually illustrates the strong correlation between intrasocial capital measured through the corruption index, and the number of active Wikipedia users per 1000 inhabitants (WAusersNorm). The message is really strong: the more active Wikipedia editors a country has in proportion to its population, the less corrupt it is. The correlation table below confirms this picture for all measures we have been collecting.

The total number of Wikipedia articles (wikinorm), total number of edits (weditnorm), number of all users (wusernorm), and number of active users (wausernorm) per 1000 inhabitants per country are all significantly correlated with corruption. Even more, the number of active users (wausernorm) is correlated with the CDS rate. The more active Wikipedia editors a country has, the lower is the CDS rate the country’s central bank has to pay to protect its debts for the next 5 years.