The US – a Loophole Society – or a Society of Trust?

My immersion into the loophole society concept took place in 2007 when I was bringing used computers to Ghana, to be donated to schools. While the total value of the computers was about $1200, getting them through Ghanaian customs took two weeks and cost me another $1200. I had to hire an agent, who was a relative of the headmaster at the receiving school, who expected to be paid $200 to shepherd me through the myriad customs clearance offices. This customs process, designed to plug customs loopholes for importers, doubled the costs of the goods. However when I had delivered the computers I found out that I could have bought the same computers for about $1200 on the public Makola market in Accra – so it seems clever people always find ways to exploit the loopholes.

It is my perception that the loophole society concept is not restricted to African countries. Even the US has become more and more a society where people exploiting loopholes are rewarded and admired. Last week we learned that, by clever exploitation of tax loopholes, GE had 10.8 billion of profits, but a tax bill of $0 for 2009. The loophole phenomenon however is by no means restricted to big companies, but trickles down to individuals looking for loopholes to get a little break in dealing with others.

I learned about the differences between “small worlds” – engendering trust, and the “big world” encouraging exploitation of loopholes recently when I was attending a meeting of the Swiss-American chamber of commerce. A frustrated Swiss businessman – coming from a very small world – bitterly complained about the 500 page contract that the lawyers of his US business partners wanted him to sign. As he said, in Switzerland business contracts are still one or two pages, containing the key points of the business deals, and not 500 pages of provisions trying to plug every possible loophole. Because, as he said, if something goes wrong, instead of trying to resolve the issue, lawyers from both parties will start pouring over the 500 pages, and try to find the loopholes in their favor. This is great news for the lawyers, as it keeps them happily employed. It is not so great news for the Swiss business owner, because he will have to spend most of his profits, and then some, for the fees of his American lawyers.

Doing sponsored research in both the US and Switzerland gives another opportunity to compare the loophole society with the trust society. Research dollars spent at a top US university carry an overhead of 70%. This compares to an overhead rate of 15% in Switzerland. This means, that out of every US research dollar, 70 cents are spent on internal university administration, whose main task it is to make sure that the other 30 cents are not squandered. Compare this to the overhead at the Swiss university, where 15 cents on every Swiss Franc are spent on oversight and administration, and the remaining 85 cents on the researchers.

While the last two examples are somewhat oversimplified, they nevertheless illustrate a larger trend. The point really is that we should be moving towards a society of trust, and not a society of exploiting loopholes. This means that we should try to create localized small worlds based on self-organization and trust, where individuals are trusted to do the “right thing”, but are also held accountable for their own actions.
Eingestellt von pgloor 1 Kommentare

Might growing health care costs be a good thing?

Everybody is complaining about the ever-rising costs of health care. But could it be that this is actually a good thing, because it means we can afford to spend an ever-rising share of our dispensable income on our health?
While there is undoubtedly some misuse of our healthcare dollars, and money is wasted on unnecessary beauty operations, or even worse, on lawyers filing malpractice suits, I think that the overall fraction of dispensable income a society can afford to spend on healthcare is a good benchmark for gross national happiness.
There are many variables influencing happiness, such as income, being married, and age, but being in good health has been found to be one of the most reliable predictors of happiness, as has been shown by many researchers. Countries which are able to spend a large amount of their income on healthcare should therefore be happier.

Does national happiness and healthcare spending indeed correlate? Because I could not find statistics, I did a quick calculation myself. I looked up mean health care spending per head in PPPS (purchasing parity adjusted dollars) of the OECD countries in 2001. I then compared these numbers to the gross national happiness index as listed on the World Database of Happiness. As a control variable in my model I took country size, looking up the population numbers on Wikipedia. Below are the actual numbers, showing that the US and Switzerland are the record spenders on healthcare per head, but are also fairly happy, although small countries like Denmark, Iceland, and Luxembourg are even happier, while spending less money on healthcare. 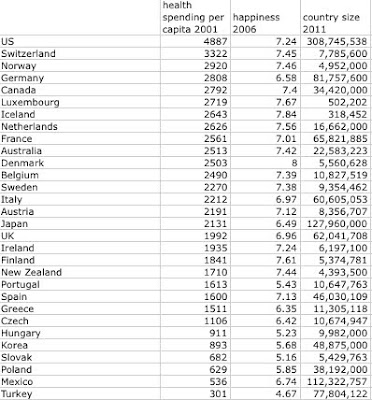 When I did a linear multivariate regression with these numbers, using health spending per head and country size as independent variables, and happiness as the dependent variable, I found an adjusted R squared of 0.58, with standardized significant coefficients of 0.83** for health spending per head, and -0.38** for population size. To put this in simple language, this means that 58% of the happiness of a country is explained by the health care spending and the country's size. The more a country spends on individual health care, and the smaller the country is, the happier its inhabitants are.

What’s the conclusion for the US? Well, this means investing money in health care actually might not be such a bad thing, but please, allow for local autonomy, giving subgroups of the population a say on how the money is being spent.
Eingestellt von pgloor 2 Kommentare