Why Money, Power and Glory Are Bad Motivators

If all we want is money, power, and glory, the world becomes a sad place. Academic research provides solid evidence that the pursuit of these three things makes collaboration among humans miserable.


For instance, it appears that students of management and economics, who make the pursuit of money and power their life's goal, are more greedy even before they start their studies, and that they become even more so over the course of their education.  In behavioral research, first year economics students have been shown to be more likely to free-ride in public goods games: In one experiment, students could deposit money into a public account where it was multiplied and distributed to all participants, or keep their money in a private account, and still participate in the distribution of the public pool.  First year graduate students in economics kept eighty percent of the money for themselves, and only put twenty percent into the public pool, compared to all other participants in the game who put fifty percent of their money into the public pool. In a follow-up survey the researchers asked the students about their understanding of fairness. While for all other students the concept of fairness was an important one, a large part of the economics students either refused to answer this question or were unable to give an understandable answer.
When the students got the opportunity to play the prisoner’s dilemma game, which rewards participants for cheating, economics majors were almost twice as like to cheat on their teammates as students with other majors.

The researchers also explored if economics students became even more selfish over the course of their studies. This seems indeed to be the case, documented by having the students play the prisoner’s dilemma game over extended periods of time. Normally participants become more collaborative over time, cheating less on their teammates. This effect of increasing collaboration over time was conspicuously absent for the economics students. In an experiment comparing economics students and students from other majors in the first and second years, economists were significantly less fair, and more selfish than their peers, and this effect became stronger in the second year. It seems that economists start out more selfish than others, and that their selfish behavior gets reinforced over time in daily interaction with other economists.

The researchers also found that economics professors are much more stingy as charitable givers than professors in other disciplines.  In a survey answered by 576 academics, there were almost ten times as many non-givers among the economics professors than in all other disciplines. In another natural experiment, Bruno S. Frey, a professor of economics at the university of Zurich, investigated the charitable behavior of 28,586 students at the university of Zurich. Each semester students could decide if they wanted to contribute a small amount of money towards a fund for needy students. Frey and his colleague found that in particular students of business economics were significantly less generous than students from other majors, and this effect stayed over the entire duration of their studies.  Frey even found that the effect goes back to high school, as students from high schools with emphasis on business economics were stingier than their peers. The late Stanford professor Hal Leavitt put it succinctly, stating that business education transforms students into “critters with lopsided brains, icy hearts, and shrunken souls.”

Power corrupts – behavioral economists have demonstrated this folk wisdom in a series of ingenious experiments. In a research project in Boston and New York, researchers manipulated the feeling of power of study participants by inviting them to stand in either an impressive posture, or in a more humble and modest way. They then gave the participants the opportunity to cheat on them by “accidentally” overpaying them after the “official” experiment was over. People in the humble posture were more than twice as likely to return the overpayment than people standing in the power position. In a second experiment, the feeling of power was manipulated by either seating participants at a wide and expansive desk, or giving them a small table and chair. When study participants got an opportunity to grade their own tests, the likelihood of cheating by correcting their own answers was again more than twice as high for participants experiencing the “feeling of power” sitting at the wide and expansive desk. In two further experiments the researchers compared the driving behavior of car drivers with the size of their car. In a car simulator, if participants got a large car seat, they drove more recklessly than when sitting on a small and cramped car seat. In the final experiment the researchers counted the instances of double parking in New York, which is illegal, and encumbers other traffic participants. They found that the larger the car, the more likely it was that drivers were willing to double park on the streets of New York.

In addition, researchers also found that people of higher social classes, having more power and glory, behaved less ethical. For example, when driving on the streets, drivers of upper-class cars were more willing to cut off other vehicles on a busy four-way intersection, and to cut off pedestrians at a crosswalk.  In further studies, participants were asked about their socioeconomic status, as well as their willingness to lie to job applications to entice them to accept a job. It turned out that people with higher socioeconomic status and thus more power were more willing to cheat and to lie. In another experiment, a feeling of power was established through psychological manipulation, by asking participants to compare themselves against people with the least money, least education, and least respected jobs. This put them in a mindset of power, which made them more willing to behave unethical by taking away more candy which would otherwise have gone to small children.

More powerful people are also more willing to cheat on their spouses. Conducting a survey with 1561 participants, researchers found that the higher the socioeconomic status of a person was, the higher was both their willingness to cheat on their partner and their actual infidelity. This was independent of gender; more powerful women were as willing to cheat as more powerful men. In another project, the same researchers found that power increased hypocrisy. The powerful were stricter with others’ moral transgressions, while at the same time being more willing to misbehave themselves. The feeling of power was again induced by priming participants to recall experiences of low or high power. More powerful participants were quick in condemning the cheating of others, while cheating more themselves when playing lottery games. It seems that a position of power goes along with a sense of entitlement.

So it seems we all should strive to be a bit less of Homo Competitivus, and more of Homo Collaborensis. However I am not sure if America is ready for it, considering that Donald Trump was nominated as the official candidate for US President, while Bernie Sanders was not?

Here are the links to the most recent versions of my two evolving books
Swarm Leadership and Homo Collaborensis:  Using Collaborative Innovation Networks to Build a Better Business through Empowered Stakeholders

both to come out in January 2017 with Emerald.

Feedback is most welcome.

Finally thanks to Adam Grant for his excellent blog post, where he is expressing the same concerns very clearly.

Does Twitter Tell Who Will Be the Next President? Comparing Donald Trump’s and Hillary Clinton’s Twitter Influence

Over the last year Donald Trump has been doing a brilliant job kindling his initially highly unlikely candidacy as US Presidential applicant. Following the principle that there is no good or bad PR, that any news is good news as long as it is in the news, he has acted as a master provocateur. He has been a genius in hitting the soft spots of US society, constantly provoking increasingly broader parts of society with over 32,000 (and rapidly growing) racist, sexist, and religiously offensive tweets.

I was curious to see how his Twitter behavior would compare with the articulations on Twitter by his Democrat competitor for the job, Hillary Clinton. Therefore I used Condor’s Twitter EgoFetcher (thanks, Joao, for coming up with the idea) to collect the most recent 10,000 tweets about each candidate on August 4, 2016 at 10.00AM.  The EgoFetcher works in four steps: in step 1 it takes the last N (for example 10,000) tweets about the search term or Twitter handle (e.g. “Donald Trump”). Note that normally – except for an individual’s own tweets -  the  search API of Twitter only returns last week’s tweets.  This is not a problem for this search, as people send thousands of tweets about each candidate per hour. In step 2 it constructs a network with a link from twitterer B to twitterer A if B retweets A, or B mentions A in a tweet. In step 3 it takes the timelines of the 480 most influential people in the search results, the influence of these people is measured through their degree in the retweet network from step 2. For twitter users, their timeline is all their tweets, sorted from newest to oldest. In step 4 it adds for each tweet collected in the previous steps the first 100 retweets.

The picture below shows the combined Twitter network, with the tweets about Donald in yellow, and about Hillary in green. 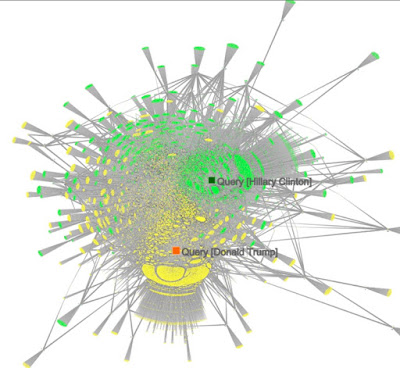 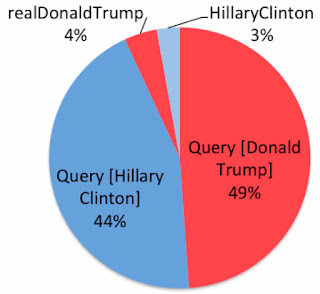 So will Donald become the next president? Not so fast.

When looking at each of the network separately, a different picture emerges. The picture below shows the network for Hillary at left, and for Donald at right. The green twitterers are the ones returned in the original search about the search term (“Hillary Clinton” or “Donald Trump”). The yellow twitterers are the people tweeting about the most influential 480 twitterers among the green people. 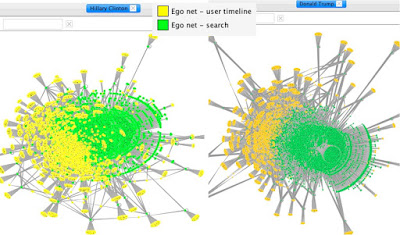 The first thing we note is that not only is the timeline crowd of Hillary more numerous than Donald’s (18,363 people retweeting about Hillary compared to 17,295 for Donald), but they are also much more retweeted (91,681 retweets instead of 85,890).
When calculating the six honest signals of collaboration described for example in my new book manuscript, the picture becomes even more pronounced. 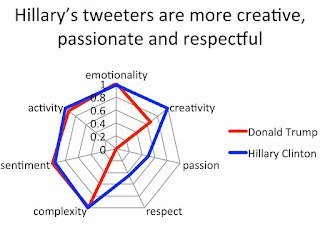 The metrics shown above are calculated using the dynamic social network analysis features of Condor. Activity is the total number of tweets in the EgoFetcher network above originating from each candidate, where Hillary beats Donald. Emotionality, sentiment, and complexity of language are calculated using the machine learning natural language processing features of Condor, based on the language used in the Tweets. There is not much difference here, although Hillary’s fan base uses slightly more complex language, while Donald’s constituency is slightly more positive, which at least might be partially explained by his hashtag #makeAmericaGreatAgain. The large difference is in creativity, passion, and respect. Creativity is measured as average number of changes in network position among all the twitterers, from being central to be peripheral in the network. In earlier work we have shown that the more people rotate in their network position, the more creative they are. Passion is measured as the time it takes a person until he or she responds to a tweet. Respect is measured as the time it takes all other people to respond to her or his tweets. And in these three scores Hillary’s community beats Donald’s handily.

I will be curious to see if increased creativity, passion and respect translates to the election results on November 8.