What Motivates Creators – Lessons from a Cool Artist

Little did I know when I was attending one of the evening events of Swissnex that I was about to meet a truly impressive creator. After filling a heaped plate of food at the sumptuous buffet after the talks, I was looking for a place to eat when I noticed two attractive women in the back of the room. As soon as we started talking I noticed that they were not just a pleasure to look at and talk with but real creators. In my discussion with Magdalena, she told me that she was a graphic artist producing digital art. When she invited me to visit her in her studio I jumped at the opportunity.

On a sunny afternoon the next week I climbed the stairs to her studio in Revere outside of Boston. The studio doubles as a gallery, displaying really cool art. When we sat on her couch in the middle of art books and framed digital pictures, Magdalena told me a bit about her life. She was born in Poland to parents of German descent, as a young adult she moved to Germany, later after she had married an American she moved to Boston, where initially she continued working as a biologist for a research company. Ten years ago, however, she decided to quit natural science and to exclusively focus on art. In her art she takes digital photographs of people, dressing them in medieval cloth and embedding them in a renaissance style environment, giving her digital pictures the feel of Rubens or Boticelli paintings. For her digital paintings she needs lots of models, whose pictures she takes on the floor of her living room. She has a wide circle of models and friends, drawn from fellow artists, painters, photographers, and actors but also including scientists from her previous work. One of the more interesting ones is Niki the crossdresser with large wig at night - Nick the scientist during the day.

Her masterpiece until now is “the sleepers” (extract pictured below), a digital composition of 35 models, combining 35 digital photographs of 25 different people into a surreal nightly landscape of ethereal beauty.

When I asked her how she finances her art, she told me that she works seven days a week, only now it’s not work anymore but her passion and labor of love. She explained “I want to spend my time to become a better artist, and not wasting my time selling art”. This of course means, that besides creating art, and occasionally selling art, Magdalena is doing all sorts of odd jobs. She has folded towels in “bed & bath”, and she worked as a temp usher during the entire last stay of Cirque du Soleil in Boston. During these jobs she never stops promoting her art. While working at Cirque du Soleil, she produced one of her signature large digital artistic creations with some models from Cirque du Soleil, and asked for permission to put it up in the tent. When her temp manager denied the request she found another employee of Cirque du Soleil who put it up for her in the break room of the internal employees of the Cirque.

She even succeeded in having some of her art shown in the ICA – the Institute of Contemporary Art in Boston. This happened when one day she learned that next Saturday morning the ICA would show 100 pieces of art from local artists. Needless to say she was the first one at the door next Saturday at six in the morning, not only assuring a premium spot for her piece of art, but even winning an award for the best picture.

For a change, Magdalena likes to go out to art shows and cultural events like the one from Swissnex at the Harvard Business School where we met. Another favorite of hers are the events from the Goethe Institute in downtown Boston. Not only is there good food at these events, but also good company, and the opportunity to recruit more models for her masterpieces, and perhaps even a customer or two.

When I asked her what motivates her, the first thing I noticed was a fierce sense of independence and self-determination. This reminded me of the famous quote of Perikles, politician during Athen’s golden age of democracy: “Make up your mind that happiness depends on being free, and freedom depends on being courageous”. Magdalena put her own principle into the following words “You end up where you want to go if you let go without knowing how you will get there.”
Her main motivation to do what she does is twofold: seeing the happiness of people when they acquire her art, and the big satisfaction she draws from the process of creating new art.

One of her ways of increasing dissemination of her art is to choose her models well. If they like her art and their own representation in Magdalena’s pictures, they will spread the word. Usually this works very well, at least it worked for me. At the end of my visit she had successfully recruited me as a model for her next masterpiece, tentatively named “the wall”, which will combine a large number of people building up and tearing down a wall.

I think every member of a COIN can learn a lot from Magdalena!
Eingestellt von pgloor 0 Kommentare

Here is an updated analysis of the Oscar predictions, run on March 2nd, 2010. Again, sources being used were the collective mind of movie enthusiasts on IMDb.com and movie fans from all around the world represented by bloggers and Web masters. The Internet Movie Database (IMDb) was analyzed using a specialized version of sentiment retrieval with an adapted bag-of-words. Web and blog buzz values come from Cooltrend. Tapping the thoughts of this swarm delivered the following update to our older analysis: 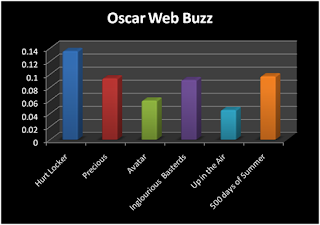 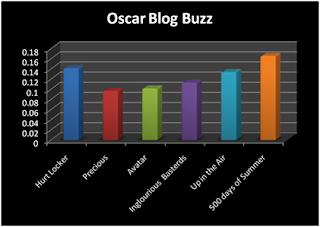 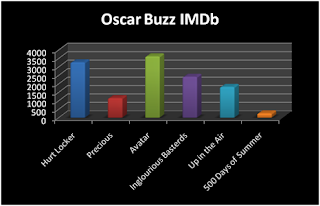 While IMDb users have two clear favorites, Hurt Locker and Avatar, the Web seems to favor Hurt Locker. Bloggers are seeing 500 Days of Summer in front right now, but this might change since the blogosphere tends to be relatively volatile in opinion trends. So, in sum we would expect Avatar to have the best chances on winning best picture, followed by Hurt Locker. 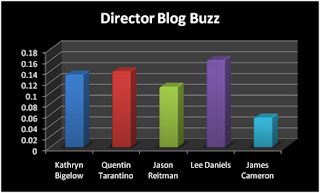 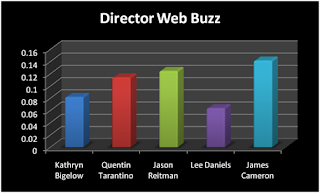 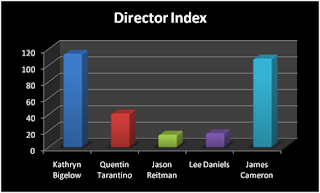 Directors – here it is again a head-to-head race between Kathryn Bigelow (Hurt Locker) and James Cameron (Avatar). They seem to be tightly correlated with the best picture results and this is probably not too surprising. Interestingly the Web sees James Cameron while Kathryn Bigelow is really not that popular. Blogosphere is undecided in this category, Mr. Cameron is clearly behind in the buzz though. 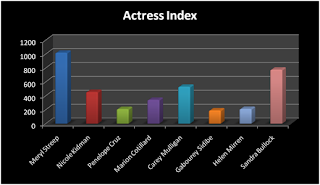 The surprise nomination of Sandra Bullock for the best actress award caught us last time we made the prediction – including her this time shows that she still is behind IMDb’s favorite Meryl Streep. Looking at actors the following picture rises: 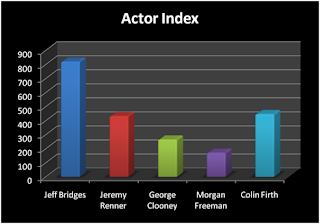 Again IMDb decided on a clear favorite and it is Jeff Bridges. While Jeremy Renner and Colin Firth certainly receive some attention in discussion they are both only half as popular in the forums as Jeff Bridges is.

In summary we now give our final prediction, with a primary (the most likely winner) and a secondary choice, based on the collective mind of the Internet’s movie swarm:

It is really a close decision in best picture and director, but considering the combined Web, Blog, and IMDb metrics there is a slight preference for the movie Avatar to be this year’s best picture winner – Hurt Locker is very close though. Director category discussion sees Kathryn Bigelow receiving the award while James Cameron is put second here. In actors it looks like Jeff Bridges pretty much made the race, however in actresses it is not completely clear yet who will cross the finish line first – though Meryl Streep has a slight advantage. Let us look back at this once the Awards have been given out!