It’s In a Name - How much is an athlete worth?

These days Forbes again published sport’s top earning athletes. In spite of his transgressions, Tiger Woods still leads the pack with $64 million, followed by soccer player David Beckham ($18 million), tennis star Roger Federer ($16 million), Nascar driver Dale Earnhardt ($14 million) and basket ball players LeBron James ($13 million) and Kobe Bryant ($12 million).
I was curious to see if Web buzz and valuation of a player's attractiveness for corporate marketing executives from Nike, Addidas, Reebook and the like had any correlation. The two pictures below show the Web buzz share of five of the six athletes (I skipped the Nascar driver):

As the pictures show, the ranking at the top corresponds nicely. Tiger Woods is lonely at the top both on the Web and on blogs, but then there are some interesting differences. Kobe Bryant has more than his share on Web buzz compared to what corporate marketers paid for him, which means they got a good deal considering his high Web popularity. David Beckham, on the other hand, seems somewhat overpriced considering that he commands only 16% Blog and 20% Web buzz, well behind Roger Federer’s 21% and 25%. The conclusion: invest into the Swiss, he seems on the rise right now, at least as far as Web and Blog buzz goes.
Eingestellt von pgloor 0 Kommentare

Oscar Night is getting closer. On Tuesday Hollywood announced this year’s official nominees of the 82nd Academy Awards. As previously posted on this blog we are running our own Oscar predictions based on buzz in the Oscar forum on imdb.com and Web and Blog buzz analysis. Our latest results presented here were calculated on January 5th 2010 which is over one month before the nominations were released. In our analysis we focus on four categories, best picture, best director, best actress, and best actor.
The following table for best picture shows the results of our Oscar-Coolhunting four weeks ago. We computed an Oscar Index for every movie. This index consists of combined Web-, blog-, and message board – buzz and can be interpreted as the relative probability of a movie to receive an Academy Award on March 7th. Our approach simply measures what the Web (this means all of us) thinks. It works by multiplying the “how many” with the “who”, i.e. multiplying what somebody says (in a forum or blog) with her/his influence. 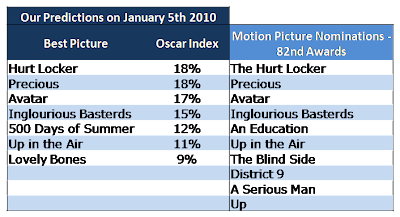 Our top 4 ranked movies correspond very well with the most promising nominations. Hurt Locker, Precious, Avatar, and Inglourious Basterds are head-to-head and clearly leading in our Coolhunting study. The following table nicely shows that these four blockbusters including the film with George Clooney – Up in the Air – also received the most nominations this year.

This year’s nominees for best directing match perfectly with our five candidates predicted through analyzing Web buzz. Kathryn Bigelow and Quentin Tarantino have a decent lead in our ranking. James Cameron with Avatar, however, will definitely be in the game when it comes to the showdown on Oscar Night.

Our predictions in the category for best actress illustrate a clear lead for Meryl Streep (30%) for her performance in Julie & Julia. Hollywood newcomer Gabby Sidibe playing a great role in the drama Precious was also on our list four weeks ago. We are missing Sandra Bullock and Helen Mirren.

The race for best actor in a leading role 2010 is much more competitive and no clear favorite could be identified in the run-up to the awards ceremony. George Clooney is definitely in a favorite position however Jeff Bridges seems to be in good shape this year. Unfortunately, we could not anticipate this at an early stage.

We are very excited to see who actually will win the Oscars on March 7th 2010. We will definitely stay tuned and provide updates as soon as we have new results.
Apropos, since the hype about the Academy Awards all around the globe is always very high we were recorded in our Coolhunting by Swiss TV in January. They will broadcast our story in the show “Einstein” prior to Oscar Night.
Eingestellt von Stefan Nann 0 Kommentare