Chinese Emperor Qin Shi Huang unified the warring states of ancient China with iron fist and utmost brutality, for instance tying one of his enemies to five horses to tear him into pieces, and killing his entire family to the third degree. Today, things are decidedly different. The age of imperial CEOs of the GE Jack Welch type residing in the corner office of the top office floor is over, Mark Zuckerberg shares the same open office space with the rest of his Facebook employees.


Today’s Millennials do not want to be lead by emperors high on testosterone and authority, but leaders high on empathy and compassion. Google ngrams and Google trend confirm this global trend, with compassion and empathy winning over tyranny.

Interesting side note: As the picture below of the last 13 years of Google trends shows, tyranny had a short comeback November 8, 2017. 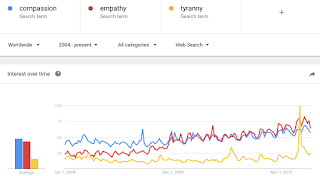 November 8 was the night where Donald Trump was elected US President.

As the zoomed-in picture below shows, “tyranny” is now almost down to its pre-election level. Empathy is back to being the leading trend, running in lockstep with compassion. 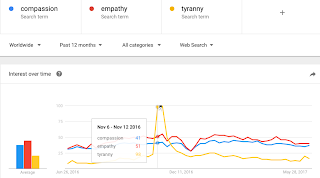 Over the last few years universal awareness that all living creatures show empathy has been increasing. In my most recent book “SwarmLeadership”  I introduce a framework based on “social quantum physics”, which explains how all living beings are connected through empathy in entanglement, and learning.

“Empathy” is the main driver for “entanglement”, which connects all living beings. “Entanglement” is the strong tie that for example every child has with his mother, or a husband to his wife, or that connects two best friends.  Entanglement happens by reading the mind of the other, trying to guess what the other might be thinking right now. The more empathy one has, the better she is at this game. At the same time, living beings never stop to learn in a ceaseless feedback loop of “reflect and reboot”, re-assessing the status quo and adapting to it if necessary.

Empathy is by no means restricted to humans. There are spectacular examples of empathy among elephants, this video from the Seoul Zoo shows how an elephant family collaborated in saving a drowning elephant baby. There are also many stories of dolphins helping not just their own brethren, but also humans, whales, and other animals in distress. But empathy goes much wider, for instance rats will forgo a chocolate treat to free their trapped companions.

There might even be empathy among plants. While trees operate at a much slower pace than animals, they nevertheless take care of their weak. In his book “the hidden life of trees”,  Peter Wohlleben. describes how old trees without any leaves are supported with nutrients from neighboring trees of the same species to keep a member of their own community alive.

Empathy and entanglement thus are the drivers of  any living networks with members of any species. For instance networks of trees communicate in a wood wide web through fungi in symbiosis with the trees’ roots.

In our research we have developed “seven honest signals of collaboration” which can be used to measure empathy and entanglement on any level, from the global level on social media down to measuring face-to-face entanglement using the body sensors of smartwatches. If you would like to know more, you will find an in-depth description in my other new book “Sociometrics” .