Who innovates better - the small or the tall?

Today's New York Times has an article by Steve Lohr "Who Says innovation Belongs to the Small?" which makes the argument that "These days, more than ever, size matters in the innovation game".

I beg to differ.

While it might be true that it takes the resources of large companies to implement fundamentally new things, large companies are extremely bad in recognizing the value of these fundamentally new things. Managers like to preserve the status quo, which means that new ideas inside a large company have a much harder time to succeed than if they are set free in the ecosystem of small startups reminiscent of the wild wild west. Other articles in today's NYT give compelling examples, such as bestselling author Jim Collins and Daniel Carasso, founder of Yoghurt giant Danone. It would be hard to envision for both Carasso and Collins to have found any traction for their groundbreaking ideas in large organizations. People with radically new ideas have a hard time to succeed in large organizations. Rather, they follow what I call the three-year-rule: Once they come to a new organization, they identify and try to implement new ideas inside their company. After three years of trying and being frustrated multiple times they usually leave the company and start afresh at another organization. Or, like Messrs Collins and Carasso, they don't join any new organization anymore, but start on their own. But they might still leave some of their creative ideas behind which are then picked up by the large company, leading to success stories like the ones described in Mr. Lohrs' article, such as IBM creating a large datamining system, or (even!) Microsoft starting some social software applications.

So, to put it in a nutshell, it does not matter at all if the innovation is promoted by a large or a small organization, what matters is the collective intelligence and creativity of the creators of the innovation, how well they are embedded into a support network, which can be inside or outside an existing organization. All things being equal, I'd rather say, in agreement with Clayton Christensen's arguments, that chances outside of organizational boundaries and restrictions are much better for a new idea to succeed. Sorry, Mr. Lohr.
Eingestellt von pgloor 0 Kommentare

“Nothing is stronger than an idea whose time has come.” – Victor Hugo (loose translation)

When following the diffusion of a cool new idea in a social network, an interesting similarity with the structure of our universe and its stars and galaxies can be recognized. Readers of “Swarm Creativity – Competitive Advantage through Collaborative Innovation Networks” know that a cool idea runs through several stages before becoming widely influential and accepted. At first there is a creator who has a brilliant solution for something. Then, his idea attracts a small group of people who consequently work on spreading the word – until it eventually makes its way into a general known concept which is adapted by a larger crowd in the social net. The final stage is the interest network – this is when the idea has been widely recognized and most people in the social network already know about it or even use it.

How does this compare to the structure of stars and galaxies? A common theory of cosmologists nowadays is that every larger galaxy has a black hole in its center, holding together the stars of the galaxy with its ginormous gravity. So, if we consider the black hole center being a creator who attracts people (stars) with his gravity (idea), how would the whole process of an idea’s evolution be reflected in these terms? Of course it would compare to the creation of a new galaxy.

When a star with a certain minimum mass “dies”, meaning its thermonuclear fusion processes run out of hydrogen, it is the birth hour for a new black whole. Thus, the fusion processes can be considered to be the creator “brainstorming” his new idea. When emergence of the idea has reached a certain stage, the creator starts spreading it to other people – the birth of the black hole. A black hole’s nature is to never release anything which went past its event horizon, thus agglomerating mass and consequently increasing gravity. For our creator/black hole analogy this is the phase of where the creator elaborates and develops his idea further and thereby increasing its attraction potential (gravity in terms of black holes).

At a point, the mass of the black hole will become so great that it actually starts drawing other stars in its surrounding area, bringing them to orbit around it. This is, as for the analogy, when the creator assembles a group of believers who begin working on further developing and spreading his idea. Because the orbiting stars themselves also draw further stars with their own gravity (the believers spread the word), the few initial ones will be joined by more after a while. Over time, a local system of stars (the learning network) and eventually a whole galaxy (interest network) is formed that way, with a galactic black hole in its center.

This is not where it ends. We could now examine what reflects ideas which did not make it beyond the second stage (the black hole could not draw enough mass – the idea was not “cool” enough, or the creator was a bad communicator of making it plausible to other people) or how new black holes form inside the galaxy (new ideas emerge in the interest network). I invite you to give your own thoughts in the comments for now.

If you would like to know more about the evolution of galaxies I recommend the Wikipedia links below.

It doesn't look good for the Republicans, or does it?

Today's attack of Dick Cheney against Colin Powell, who 'd rather choose Rush Limbaugh over Powell prompted me to check what the Web buzz is saying about the Republicans against Democrats, using our CoolTrend application. At first, checking Web buzz at large, I got the expected result:

The Democrats lead on the Web, with 53% over 47%. But then I took a closer look at the spiderweb of web links deciding on the percentages of Web buzz. Compared to older pictures, where the Republican Web sites always were closely clustered, while the Democratic Web sites were widely spread out, the Republican Web these days is similarly scattered: 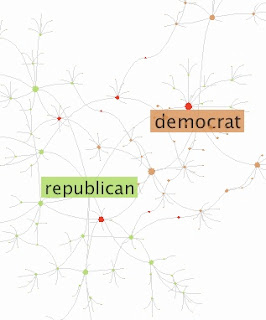 This means that a lot of discussion and soul searching is going on in the Republican parts of the Web, with many dissenting opinions, as reflected in today's comment of Cheney on Powell.
I then repeated the same query restricted to the blogosphere, because what is said by bloggers today, frequently becomes mainstream opinion tomorrow. I got quite a surprising result, the blogsphere was evenly split: both Democrats and Republicans got exactly 50%. And the Blogger network structure reflects that result also: 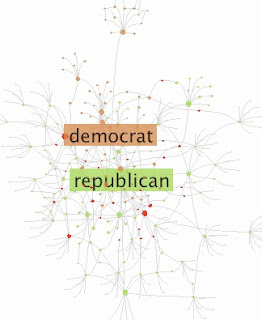 So no need to write off the Republicans prematurely. They are undergoing a lot of discussion and goal setting, with a network structure which right now looks surprisingly similar to the Democratic one, but at least in the Blogosphere, they are even with the Democrats.
Eingestellt von pgloor 1 Kommentare