Newt or Mitt: Predicting the 2012 US Presidential Republican Candidate

Based on earlier work analyzing and visualizing the hidden links in Wikipedia, we have added a new dynamic Wikipedia mapping function to Condor. The new Wiki-Evolution feature collects all links originating and/or pointing to one or more Wikipedia articles over a given time period.
Today I used this feature, to see what the Wikipedians have to say about Mitt Romney and Newt Gingrich. The picture below shows the bidirectional link network of the most important articles about the two contenders for RepublicanUS presidential candidate. The nodes are colored by actuality (the more edits they have in the last 14 days, the darker the red. (0 to 20 edits is grey, 21 to 50 edits is orange, over 50 edits is dark red). 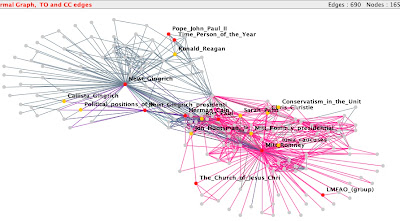 As we can see, the articles about the two candidates have attracted the most edits, but also the rock group LMFAO (whose singer SkyBlu was involved in an altercation in a plane with Romney in 2010), Pope John Paul II (who shares the distinction with Gingrich of having been chosen by Time Magazine as a Person of the Year) have had lots of edits. Among the other presidential contenders, only Herman Cain has attracted a similar number of recent edits.
The video below shows 4 months, August 2011 to December 2011, in the candidate's life reflected through Wikipedia. The pages linked to Mitt are in blue, the pages linked to Newt are in green.

The timeline comes out marvelously:
It starts with the Ames Straw Poll (August 13) where both candidates did very poorly. It then shows Mitt Romney embedded into the network of other candidates, with an explosion of activity around September 18 (his shuffle with the surging Rick Perry candidacy). Discussions about Bain Capital and his membership in the Mormon church are continuous editing topics. October 8 the Newt Gingrich candidacy takes off, slowly at first, but then really exploding October 24th, when he and Herman Cain, the favorite at that time, accepted a Tea Party sponsored debate. It subsequently illustrates the fight between Mitt and Newt, taking punches at each other, ending with Gingrich's link to the National Review, and Tim Pawlenty's support of Romney's campaign.

Finally, I was also curious whom the Wikipedians, as of December 27, would vote for. The picture below shows the betweenness of the two candidate pages in the Wikipedia link network. 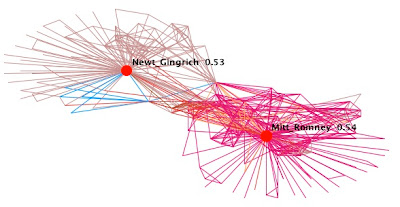