My new Coolfarming Book out

I am delighted to announce that – finally - my new book
"Coolfarming - Turn Your Idea Into The Next Big Thing" just came out. 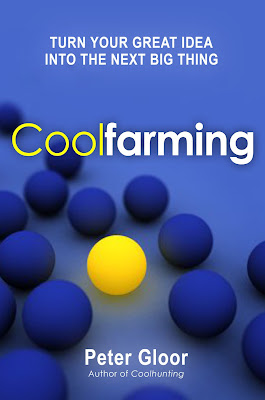 “Coolfarming” is about how to grow your own trends by creating an environment where COINs (Collaborative Innovation Networks) flourish; then - once a product has become established - extend the creative pool into a Collaborative Learning Network, or CLN, whereby a targeted group of interested people are brought in to learn the basics of the product, make suggestions for improvements, point out deficiencies, and push the idea forward.
When this feedback gets incorporated, things get really interesting, expanding the process further outward to a Collaborative Interest Network (CIN) that encompasses thousands or even millions of users, building what hopefully turns into a loyal fan base…and virtually guaranteeing the success of the idea.

Based on case studies and examples from Linux to the Twilight series, from Procter & Gamble to Apple, this book lets you in on the practical, step-by-step processes that will allow you to successfully cultivate the kind of swarm creativity that generates hot new trends . . . and then push them over the tipping point to commercial success.

If you are interested in hearing about it firsthand, I will be teaching a workshop about coolfarming at the 2nd International COINs (Collaborative Innovation Networks) 2010 conference in Savannah, it would be cool to see many of you there.