“Birds of a feather flock together” - Building a Tribe Detection System

As voiced by his press secretary Sean Spicer, US President Donald Trump frequently seems to live in an alternative reality. Reality is different for every living being, and that of course includes us humans.  Artists illustrate this very nicely, for them what is truth might change from one day to the next. For example, famous French painter and sculptor Matisse changed his perception of truth quite drastically over two years, repeatedly sculpting his model Jeannette from 1910 to 1913, shown in the progression of heads just below from highly realistic to highly abstract. 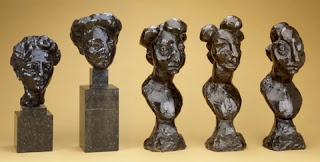 There are however groups of people, whose realities and definitions of what is “truth” are quite similar within their group. I call those groups “tribes”. Tribes, as defined in anthropology, share a name, a sacred symbol, rituals and beliefs, and they trust their leaders. For example, a well-known (although highly negative) example of how tribes are defined was Nazi Germany. It had its own name, the swastika as the sacred symbol, Hitler’s “mein Kampf” defining the shared value and belief system, the “Nazi salute” as its ritual, and the “Führer” as its trusted top authority.

Looking at today’s alternative realities, I proposed an earlier framework consisting of three main tribes, the “fatherlanders” or ultra-nationalists, the “nerds” or progressives, and the “treehuggers” or environmentalists. However, reality is more complex than that, in particular if we include alternative realities. I therefore consulted the collective mind as articulated on Wikipedia and Twitter, and tried to group the tribes based on their expressions on these online social media. Starting with Wikipedia categories, I ended up with three additional dimensions that define what tribe one belongs to, leading to the following four categories:

As we all are multidimensional creatures, we will belong to multiple tribes. The picture below shows the four tribal categorizations, with the key tribes in each tribal category: 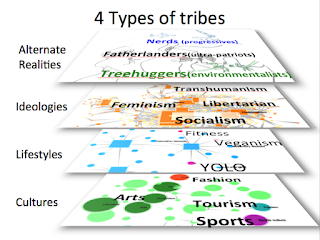 How did I create this framework?
By consulting Wikipedia and its categories. 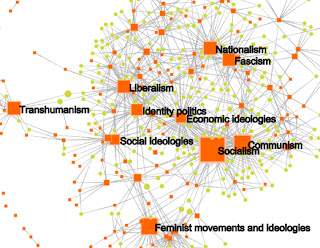 I then looked on twitter for each of the major tribes how many people self-identified with a particular tribe. This led to the major ideology tribes: Feminism, Transhumanism, Socialism, and a collection of rightwing ideologies, which, based on our Twitter analysis, we label “Libertarians”.

Repeating the same analysis for the lifestyle categories gave the full tribal map shown below: 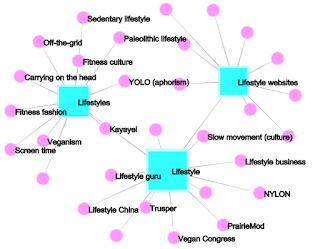 Again checking on Twitter, for instance nobody self-identifies with the “sedentary lifestyle”, although probably a large fraction of the Western population would belong into that tribe. A similar problem arises with the “off-the-grid” lifestyle, as these people are not identifiable in social media. In the end, we are left with the “Fitness”, “Veganism”, and “YOLO” lifestyles.

The Condor analysis for the Wikipedia category “culture” leads to the following network: 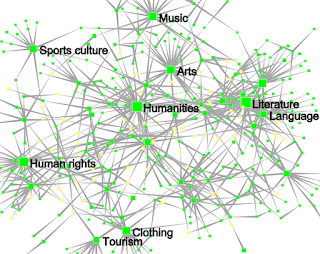 Again checking on Twitter for the popularity of the different culture tribes, we find that the four tribes tourism, sports, arts, and fashion seem to dominate.

Using the latest deep learning algorithms, and matching an individual’s word usage with the Twitter word usage of a tribe’s leaders, allows each person to find her tribe profile for “alternate realities”, “ideologies”, “lifestyle”, and “culture”. This means that each person can calculate her tribal profile, telling her how much of a fatherlander, nerd, or treehugger she is, for instance.
For example, my alternative reality profile is here: 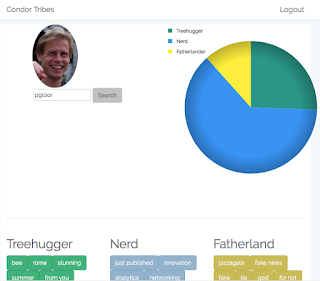 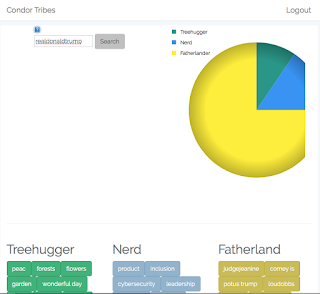 And here is Bill Gates' Try our system for yourself (you will need to have a Twitter account and some English Tweets) at http://5.35.249.27/condortribe/

Just like a personality test, it will tell you to what tribes you belong (alternative realities is online, the other three categories will be coming soon...)
Thanks a lot to Joao Marcos da Oliveira  for building the pilot system.