Today the "A World of Possibilities" Radio Show published my interview with host Mark Sommer talking about Open Innovation, Swarm Creativity, COINs, and the role and inspiration of bees.
Eingestellt von pgloor 0 Kommentare

In a blogpost on January 8 I spoke about the CoolTrend prediction system for the Zurich mayoral elections I had set up. At that time candidate Corinne Mauch was already ahead of candidate Kathrin Martelli. In the meantime our Coolhunting system collected the statistics from the blogosphere every day (see picture below: 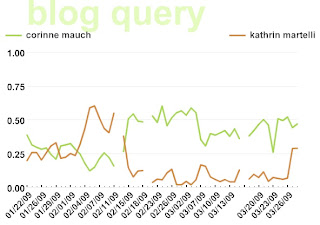 Until the main elections on February 8 things were fuzzy, with Corinne Mauch and Kathrin Martelli changing the lead a few times. In the elections February 8 - again as predicted by our tool - Martelli had a slight lead over Mauch, but not enough to overcome the absolute majority threshold, which means that a second round became necessary. After February 16 things became clear in the blogosphere, Corinne Mauch always had a solid lead.

Towards the end, Kathrin Martelli's buzz went up also - not surprisingly, as in the final days bloggers from both sides became more active. But it was never enough to challenge the lead of Corinne Mauch, and so she easily won the elections in Zurich today! Congratulations, Corinne Mauch!
Eingestellt von pgloor 1 Kommentare

Web Science 2.0 – Online Analysis of Entrepreneurship Activity at German Universities
Which university is the place to go to become a successful entrepreneur? Where do I find a strong entrepreneurial network and prosperous environment to start off my business? By mining and analyzing online social networking sites we found interesting answers to these questions. Out of representative samples of alumni students from eleven German universities we retrieved company and startup founders as well as other executives. We looked at the largest universities including high potential institutions (LMU Munich, TU Munich, and University of Karlsruhe) and top ranked private business schools (European Business School (EBS) and WHU Vallendar). On average we identified 1,070 people that match the entrepreneurial profile. Through our sources we were also able to get internal and external relationships for every entrepreneur. By loading this data into our powerful social network analysis machine Condor we constructed the social network for all eleven universities.

Picture 1: Social network of entrepreneurs of eleven German universities
Picture 1 shows the network of entrepreneurs of all eleven universities. There are significant differences of how the various schools are connected and located in the overall graph. While some universities (Hamburg (green-brown), Munich (purple), and Cologne (light green)) are very central and dense connected clusters others are peripheral and almost isolated from the rest (e.g. University of Mannheim (dark purple), Karlsruhe (dark green), and Hannover (grey)). The two analyzed private business schools (EBS Oestrich-Winkel (blue) and WHU (dark blue)) form very dense networks, too. As opposed to EBS which is fairly peripheral and loosely connected to University of Hamburg, WHU is totally located in the center and seems to be the ultimate connector of the overall network. The top ranked schools for mechanical and technical engineering (RWTH Aachen (pink) and TU Munich (light blue)) both are located on the very right side of the graph depict some interconnections. Some people from RWTH Aachen are very well integrated while others are isolated completely and only related through their peers. TU Munich is not a coherent network and is mostly overlapped by University of Munich which might be on the one hand a result of their co-location but also an indication for a close cooperation between both schools. However, there is no interconnectivity between the high potential institutions University of Karlsruhe and LMU or TU Munich. Based on these results we can conclude that Munich provides a very strong environment for entrepreneurs and is also well connected to other institutions. We also see that WHU is the place where founders and potential entrepreneurs find ideal conditions to ramp off their own company.
A content analysis of the founder’s attributes brought up some interesting insights. 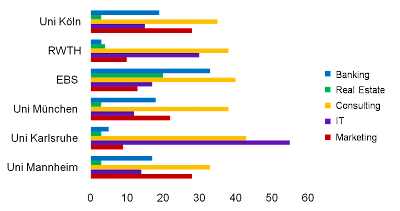 Picture 2: Popular industries for entrepreneurs from different universities
Picture 2 shows most popular industries for entrepreneurs from different universities. While the consulting business is strong across all institutions some sectors are particularly centralized on one school. Marketing is prevalent at University of Cologne which reflects the fact that Cologne is the capital of media and ad agencies in Germany. Karlsruhe dominates the IT sector whereas Banking is most popular at European Business School Oestrich-Winkel which is closely located to Frankfurt, the mecca of European banking.
Eingestellt von Stefan Nann 0 Kommentare

Wednesday afternoon I had a visit by Betsey Merkel from I-Open Education, in its own words "...a community that shares best practices in collaborative leadership, networks and Strategic Doing to strengthen Open Source Economic Development". She did a really nice video interview that gives an overview in a nutshell of the principles of COINs and swarm creativity (you will need to register first).
Eingestellt von pgloor 4 Kommentare