Why Coolhunting is more accurate than "plain" Web Metrics

Today I stumbled on an interesting web post "Using Web Metrics to Analyze the ‘Palin Effect’ & 2008 Presidential Campaign". It is by Brent Payne, Head of Web Search at the Tribune whose holdings include the Chicago Tribune and the LA Times. He was showing that Sarah Palin indeed is the most Web-researched among the 4 candidates on the Presidential ticket.

The picture below shows the percentage of users explicitly searching for one of the candidates on the Tribune's Web sites: 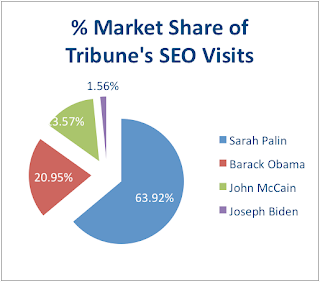 As we can see, Sarah Palin is by far the most researched. Brent then also shows the corresponding curves on Google Search, which confirm the same picture: 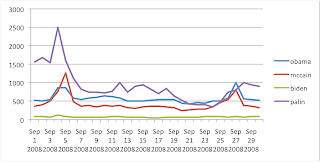 Compare this with our Condorview coolhunting. On the Web, we get a similar picture as Brent did for today. Today Sarah Palin commands 44%, buth then the rankings already change: 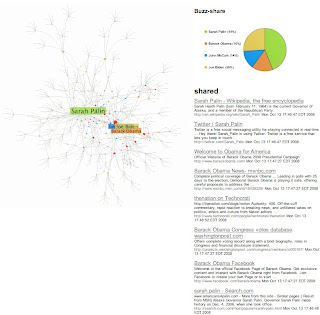 The big difference is that Joe Biden (26%) gets more buzz than Barack (16%). This is because Condorview is not counting what people search, but what important Web sites (by betweenness centrality) say about the candidates. As you can see on the right side in the above picture, wikipedia, twitter, barackobama.com, technorati, washingtonpost, facebook, and search.com all talk more about Sarah Palin and Joe Biden these days than they do about the Presidential candidates themselves.

But does this mean that Palin's popularity will translate in a vote for McCain?
To see the short term trend, just repeating the same Condorview Coolhunt for Blogs already shows a different picture: 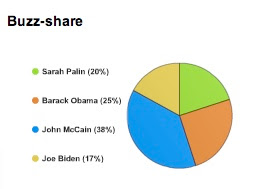 The Presidential candidates command a larger share than their potential Vice Presidents. McCain leads Obama - for today (actually, for this very minute, Monday October 13, 2008, 5:55pm EDT, as these coolhunts, particularly in the blogosphere, can change by the minute.) This might suggest that Palin is indeed boosting McCain's popularity. But wait a minute!

The Condorview trend curves over the last five weeks show a different picture: 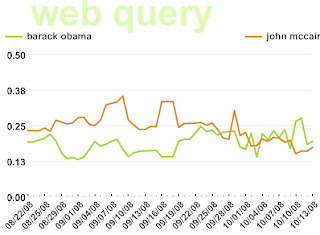 Since beginning of October, Obama beats McCain, consistent with what the polls are currently telling us.
Eingestellt von pgloor 1 Kommentare

Helped by the faltering economy and Wallstreet banking crashes Barack Obama is rebounding against John McCain. As I had mentioned before, measuring Webbuzz with Condorview has shown for the last few months a solid lead for John McCain.

Well, this seems to have changed for now, both when measured on the Web with Condorview 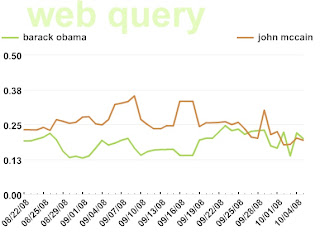 as well as measured by conventional polls. The picture below is from a poll taken in Florida, one of the key battleground states, end of September. 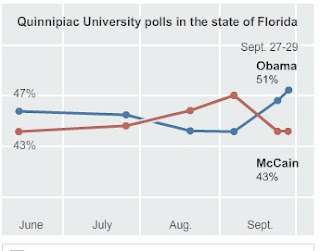