Recently I was asked if I could predict the outcome of the Iranian Presidential elections on June 12, 2009, based on what people are saying on Blogs and the Web about the candidates. Unfortunately this is a much harder task than predicting the US Presidential elections, or the Zurich Mayoral elections, as our system is not set up to parse and rank Farsi Web sites.

Nevertheless, I was curious what I would find out. I took the leading candidates from the Wikipedia page. They are Mahmoud Ahmadinejad, the current incumbent, Mir-Hossein Mousavi, who is running as an independent, and Mehdi Karroubi. There is a whole list of other potential candidates listed on Wikipedia, which I ignored for my tests. I included Mohammad Khatami, former President of Iran, who has endorsed Mousavi.

Below is the Condor/CoolTrend picture of what the English Web said for the last four days: 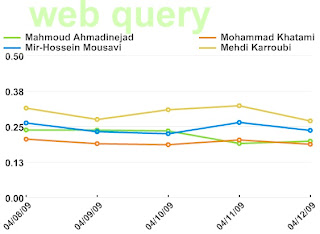 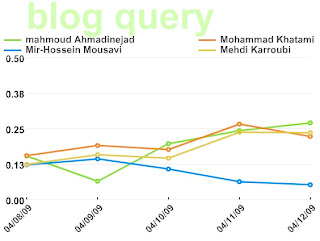 Current incumbent Ahmadinejad is leading. Based on prior analysis of many other elections, Blogs predict the trend fairly well, so things look bright for Ahmadinejad, at least today.
BUT, this is only on English blogs. So let's look what Iranian Web sites and blogs say. As we don't have a Farsi analysis system, I just entered the same query into CoolTrend, limiting it however to the "ir" domain. A very different picture is emerging. Inside Iran, on the Web, Mousavi and Kahatimi, who is supporting Mousavi, are leading: 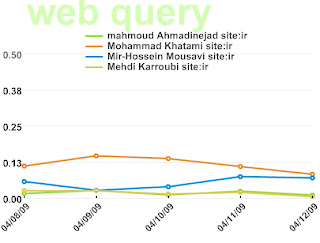 The same picture is true for the blogosphere, Khatami and Mousavi are leading. This is confirmed by a poll from late March, which puts Mousavi ahead. 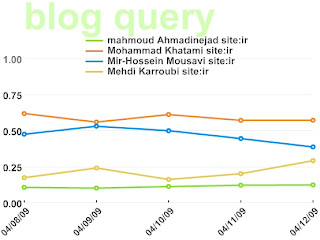 The final picture shows the social network of candidates and their shares today (April 13, 2009), restricted to Iranian Web sites. As our system can not handle Farsi characters, only the candidates' names are displayed, the URLs could not be shown:

So, on the Internet, we know who the next Iranian President might be, at least for today: Mir-Hossein Mousavi.
Eingestellt von pgloor 1 Kommentare

People need to be watched, otherwise they will not do their job. That was the idea of Jeremy Bentham, who designed a prison, the Panopticon, where every prisoner could easily be watched by much fewer guards.

Today there is software that does a similar job. For example, LiveJobs, a company that operates virtual call centers all over the US, distinguishes itself from competitors by meticulously tracking performance of its call center agents. Whether it is selling insurance, transcribing documents, or taking pizza delivery calls, LiveOps software monitors individual performance on the most granular level, and delivers it to both LiveOps management and the individual employee.

So, in a sense, big brother is always watching. People are “operating in total transparency”. At least for LiveOps employees, this does not seem to be such a bad thing. They continuously check their own performance every day. If they don’t perform, they will not be fired, but they will not get more work from LiveOps.

For knowledge workers, monitoring e-mail does provide the role of the panopticon. When we do a knowledge flow analysis of an organization, we provide the same function, offering individuals a “virtual mirror” based on their communication behavior. But other than the Panopticon, we only offer a condensed view of the organization to management – transparency for the individual, but guaranteeing their privacy to management, only releasing individual information at the request of the individual.
Eingestellt von pgloor 0 Kommentare

Today's NYT describes a list of computer programmers turned entrepreneurs, creating cool apps for the iPhone. With the barriers to entry as low as they are here: one basically just needs a computer to download the app developer kit, plus of course programmer skills, this is the perfect opportunity for swarm business. People like Ethan Nicholas, a (former) Java developer at Sun, making $800,000 with a shooter game, are the new members of the swarm. Apple, handling sales and marketing including money collection though its App store, proves once more superb coolfarming skills.
Eingestellt von pgloor 0 Kommentare