Another Day of Hope (mostly), and some Fear and Worry in the US

Today I checked on the mood of the US Population through Twitter, using Twitter’s Geotagging feature. Alan Mislove from Northeastern had already found that the mood of the nation changes over the course of the day, with people having a low over lunch, and getting collectively happier in the evening, when work is over. Using our Twitter-collector-tool built into Condor, I was able to easily replicate this result.

I counted the number of retweets about “hope”, “fear”, and “worry” in the major population centers of the US, by collecting the tweets at four 2000 kilometers circles with centers at Pittburgh (North East), Atlanta (South East) Las Vegas (South West), and Boise (North West). (see picture below) I then constructed the social network between the retweeters as described in a previous blog post. The way it is calculated, it also factors in the importance of the retweeters, where a link is drawn between two people if a person retweets a post from the other person. 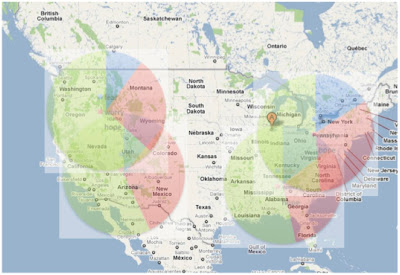 The picture above shows the areas I covered, as well as the fraction of retweets on hope (green), fear (blue), and worry (red) around noon. As we can see, people are more hopeful in the West around noon EST (which is still in the morning in the West) than they are on the east coast.
The picture changes four hours later. The graph below shows hopefulness (fraction of retweets on hope/fractions of retweets on fear and worry) around noon EST and around 6pm EST. Hopfulness shoots up sharply in the Northeast (NE), Southeast (SE), and Southwest (SW). It also goes up in the Northwest (NW), although much less. 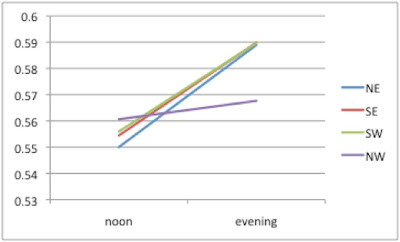 Note that there are always more retweets on hope than there are on fear or worry, showing that people are basically hopeful, particularly when work is over. Let’s hope that hopefulness will also go up in the evening in the Northwest!
Eingestellt von pgloor 4 Kommentare

Yesterday November 2nd 2010 was midterm election day in the US. I was curious what Twitter would tell us about the mood of the voters. It was already clear that things did not look good for the Democrats. In prior work analyzing data from 2009 we had already found that monitoring posts for the occurrence of “hope”, “happy”, “fear”, and “worry” would give us a good proxy for the mood of the population, particularly if we focused on the retweeted posts. So this time I repeatedly ran our Twitter data collector in 30 minute intervals, each time collecting the 200 most retweeted Tweets containing either hope, happy, fear, or worry. The picture below shows all tweets, with the red dots depicting the tweets containing more than one of the search words. 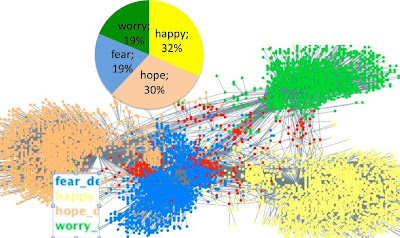 Measuring the betweenness value (i.e. the importance of the search term) shows that popular tweeters prefer tweeting about “happy” (32%) and “hope” (30%) over the “worry” (19%) and “fear” (19%) tweets. Note that I collected precisely the same amount of tweets for each search term (24*2*200), but then constructed the social network of the tweeters based on who retweeted whom’s post. To illustrate the point, the picture below only shows the social network (without drawing the links of the tweets to the search terms – these links were used in the first picture to calculate betweenness.) 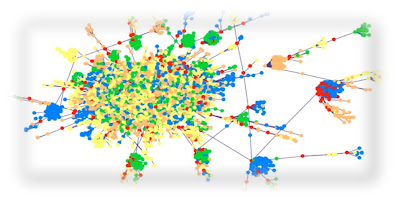 As this picture shows, the tweeters about hope and happiness (yellow and light brown) are mixed in the center, while the tweeters about fear (blue) and worry (green) keep mostly to themselves in the periphery. So even in the Tweetersphere, happy people connect, while worriers stay put at the borders of the tweeter-network.

Here is the picture analyzing the contents of all tweets I collected containing the term "fear", displaying the semantic network of the most important terms about fear:

As the picture shows, Democrats are on the losing side, Republicans won, but the term "republican" is close to the term "jobless", so fear about continuing joblessness was the main cause for their win. Harry Reid’s win is also predicted by Twitter - the terms "Reid" and "Nevada" are connected to "won".

Now the picture with worry: 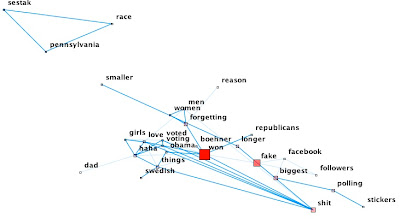 It shows Republicans worrying about a potential victory of Joe Sestak in Pennsylvania (which did not happen), Tea party members worrying about the loyalty of John Boehner, moms happy they don’t have to worry about their health care thanks to Barack Obama, and somebody worrying about loosing his Facebook account.

And here is the term view for “hope”: 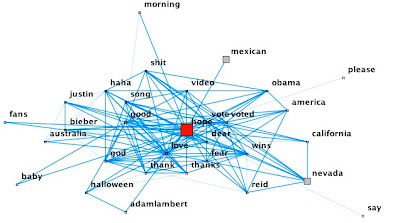 It seems Justin Bieber and Harry Reid from Nevada share the stage of hope, with some tweets about the elections in California thrown in. Adam Lambert’s Halloween discussion of his costume is picked up by his fans. Barack Obama still draws lots of emotions and inspires hope among some tweeters.

Finally the concept network for “happy” showing a quite different picture:

The top tweets containing “happy” are not about the elections – these elections are nothing to be happy about according to Twitter - but are by young girls, talking about their moms, and Justin Bieber. It is interesting that the term “happy” does not even show centrally in the term network.Rather, the discussion is about things that make these girls, who are mostly not even from the US but from Asia, happy, like love, and surprisingly, their moms, and it seems, eating a Burger at MacDonald’s in San Francisco.
The only election tweets are by girls rejoicing that voting is finally over, so they don’t get the weird calls at their doors by election workers anymore.
Eingestellt von pgloor 0 Kommentare