Will the Swiss Population vote for Ecopop?

On November 30 the Swiss will vote on another highly restrictive immigration initiative, the Ecopop initiative, which wants to restrict net immigration to Switzerland to 0.2 % annually.
Today a former student asked me about the chances of Ecopop succeeding, which triggered me to check the Internet about the outcome, using the social networks on the Web (mostly news Web sites) and Twitter as a proxy for the opinion of the Swiss on this topic 13 days before the vote.

Counting the number of search hits in Google brought 645,000 hits for "ecopop ja”, and 377,000 hits for “ecopop nein". This would suggest a vote for Ecopop, at least among the German speaking part of Switzerland.

But checking the Web site network using Condor, and measuring betweenness centrality of the query "Ecopop ja" in the top 20 Websites brought up by Google, identified a clear majority against Ecopop (33,000 agains 22,000). The picture below also shows the main Websites for and against Ecopop. 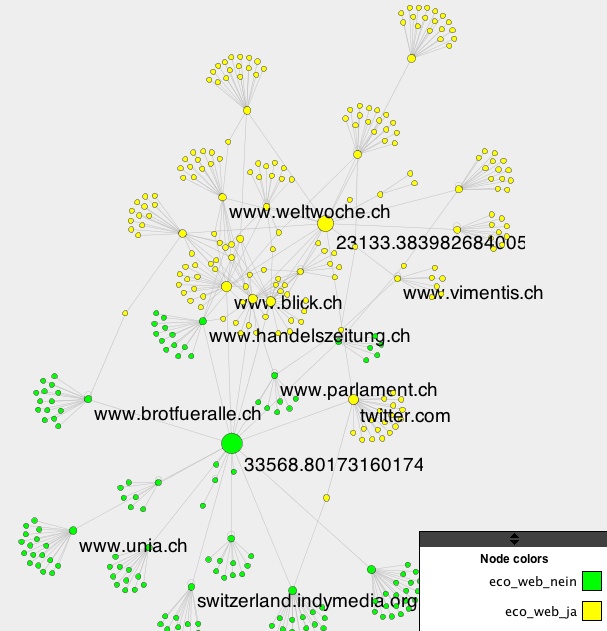 I then repeated the same process for Twitter to also read the collective mind of the crowd. The results show the same picture, with Ecopop adversaries trumping Ecopop promoters (pro 94,000/ against 127,000). 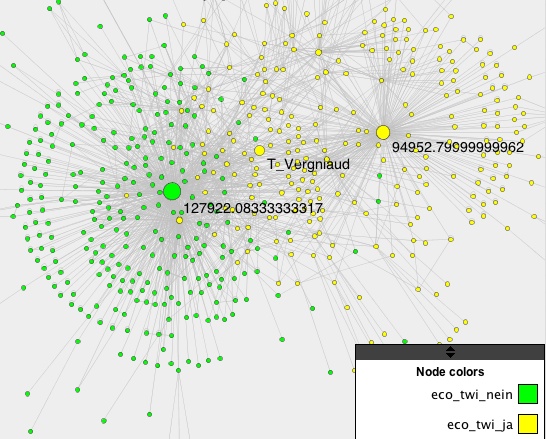 Conclusion: if the experts on the Web and the crowd on Twitter are right, Ecopop will not be accepted in the Swiss public vote on November 30.
Eingestellt von pgloor 1 Kommentare