Why Peter Jackson should direct "The Hobbit"

The article got me to run a coolhunting query about the strength of Peter Jackson’s position in his negotiations with New Line Cinema as reflected on the Web. The picture below shows what I got. 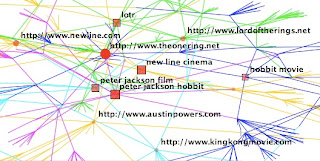 The picture also tells us (without having asked) that the other hits of New Line Cinema are “Austin Powers” and of Peter Jackson “King Kong”, but they pale in comparison with LOTR and The Hobbit!

A second picture looking at the contents of the most between Web sites about the hobbit reiterates the point: "hobbit" and "jackson" are the most central and connected terms talked about mostly together! 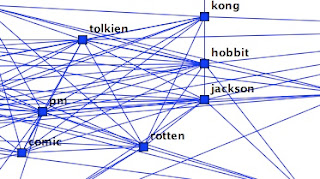 Getting the Wisdom of Crowds Through Computer Games

Thanks to Ken Zolot for pointing me to this post by Henry Jenkins on "Collective Intelligence vs the Wisdom of Crowds". Henry Jenkins rightly differentiates between the wisdom of crowds such as in prediction markets, and a more sophisticated way of working together through collective intelligence such as in Wikipedia, where people instantly get access to and can build upon each other's knowledge. In particular he talks about tapping into the wisdom of crowds through using online computer games to predict and make complex decisions.

I think using multiplayer online computer games to predict and analyze the real world is a great idea. If this idea is taken seriously, developers of such predictive games might find our research results of interest, where we correlated social networking structures of gamers with their success in the game. What we found was that differently from the real world, the most successful gamers were the ones with the highest degree of connectivity, i.e. the most friends, and not the ones with the highest betweenness (betweenness=SNA measure of choosing friends selectively by linking to powerful people). Marius Cramer and Daniel Oster analyzed a community of 382 players in the Oceancontrol multiplayer online computer game over 56 days. The Oceancontrol computer game had been developed by Marius Cramer, giving Marius and Daniel preferred access to all the players. What they found was that what mattered for the success of both individual players as well as for the teams players joined, was simply the amount of messages exchanged. A second result was that players with balanced communication behavior, i.e. sending and receiving similar numbers of messages did better.
Marius and Daniel empirically verified their results by sending a survey to the 100 best players, out of which 47% responded, agreeing on the statement that they believe that communicating a lot will make them better players.
Observing my son playing World of Warcraft confirms this finding. I saw him chatting with almost everybody he encountered in the virtual world of WoW. He explained to me that he needed to find the best players to associate himself with, and the quickest way for him was not to look at the level of the player, but to talk to everybody and quickly evaluate their response. The more you communicate, the better - it does not really matter with whom, at least initially and in the virtual world of computer games!
Eingestellt von pgloor 1 Kommentare