The fairest Country on Earth?

Today’s Swiss Newspaper Tagesanzeiger showed statistics published in a paper in the Swiss Economic Journal in 2011 which show that a person in Switzerland who has an income - well below the poverty level - of Swiss Franc 12,100 (=USD 13,000 at today’s exchange rate) gets supplemental income of CHF 54,700 by the Swiss state. In fact, with totally CHF 66,800 this person gets more money to spend than a middle class earner making 58,800 Swiss Francs, who pays CHF 7200 taxes with a net income of CHF 51,600. 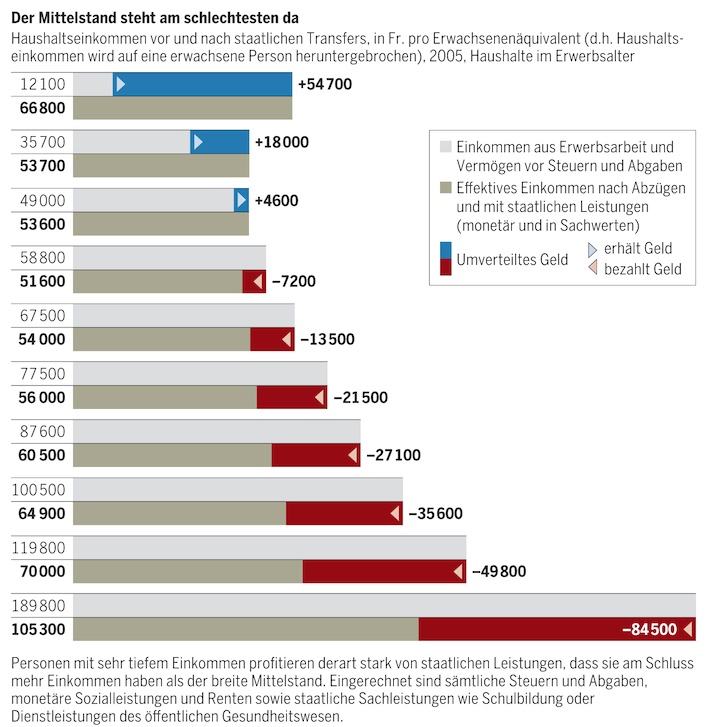 Even somebody who makes 100,000 Swiss Francs per year has less money left after taxes to spend than the person on welfare with the 12,100 income.
While there is a lively discussion ongoing – the article quickly triggered hundreds of comments - at least for now, nobody seems to fundamentally question the basic mechanisms of redistribution.
It also seems to work to the benefit of the overall Swiss population. In most of the world happiness rankings, the Swiss rank near the top (#2 on the Legatum ranking, #3 on the UN World Happiness Report).  If we take life expectancy as the final metric of individual health and happiness, Switzerland is also doing very well, #7 on the most recent WHO ranking, and #1 in an OECD ranking.

I think one critical point is that there are other criteria besides money contributing to health and happiness. People with low socioeconomic status (the welfare recipients in Switzerland) get supplements by the state to compensate for the stress and frustration in their low paying part-time jobs; many of them will also collect disability benefits as a large part of their supplement. It is impossible to make that little money for a full job, as the minimum wage is about 36,000 Swiss Francs per year, which will then be complemented by the state to the 54,000 Francs listed above.
The effect of these compensatory payments is that everybody has enough money to life in dignity.

And people making the least might need a little more to compensate for their stress and frustrations compared to middle income earners.

The Power of Skunk Works to Ignite Innovation