The deterioration of Italian society seems unstoppable. Today and tomorrow there are parliamentary elections in Italy. The assessment of the LA Times today is damning "In Italy, crime pays and may get you elected". This is in sharp contrast to the successful swarm businesses in the Silicon Valley described in my previous post today.

I still was curious to see who of the two top candidates would have better chances to become Italy's next prime minister - Silvio Berlusconi, or Walter Veltroni. Below are the results of a global Web coolhunt using our Condorview tool 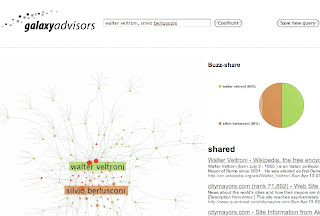 It seems they two candidates are in a perfect tie, with 50% of the Web vote for Berlusconi and Veltroni each. I then also did a Blog coolhunt. Here the picture looks quite different. 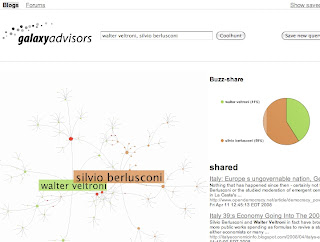 Berlusconi beats Veltroni by a clear margin. While both coolhunts have been done using the global Web, discussion undoubtedly is most active in Italy, so the coolhunting results should give a fair reflection of the mindshare of the Web and Blogosphere. Let's now see what the Italian voters decide.
Eingestellt von pgloor 1 Kommentare

Swarm Business is Social Business - in the Silicon Valley

The New York Times today has a great article about social entrepreneurs in the Silicon Valley. While many companies in the Silicon Valley have had a social conscience to start with - most prominently Google, whose credo is "don't be evil" - a new breed of non-profits have successfully merged being a vibrant business with doing good to society. High-profile examples are the Mozilla Foundation, maintainers of the open source Firefox Web browser, TechSoup, a distributor of commercial software to non-profits in 14 countries, and the Internet Archive, started by successful entrepreneur Brewster Kahle, storing old versions of Web sites. In the New York Times article, Brewster lists core principles of social businesses like transparency, staying out of debt, giving away information and refusing to hoard.

These are the guiding principles of swarm businesses, where the goal of the business is not to make the owners rich, but to serve all stakeholders. The NYT describes the process of how these social businesses start: "The new companies ... typically begin as small groups of intensely motivated people dedicated to the goal of building a product or service." This is the key part of the definition of a COIN. According to the NYT, these social businesses are evolving into an ecosystem of companies combining solid profits with serving the greater good. This again corresponds to how COINs evolve into entire communities of COINs, CLNs (Collaborative Learning Networks), and CINs (Collaborative Interest Networks). For more see the SwarmCreativity Web site.

It is wonderful to see more and more COINs turning into real world businesses. There are few limits to what the creative swarm can achieve.
Eingestellt von pgloor 2 Kommentare

I recently had an interview with Paul Willis from CNN Europe, his excellent article about Collaborative Innovation Networks (COINs) is now up.
Eingestellt von pgloor 2 Kommentare

Why Swarm Business is much better in dealing with Black Swans

The financial ecology is swelling into gigantic, incestuous, bureaucratic banks – when one falls, they all fall. The increased concentration among banks seems to have the effect of making financial crisis less likely, but when they happen they are more global in scale and hit us very hard. ……. We would be far better off if there were a different ecology, in which financial institutions went bust on occasion and were rapidly replaced by new ones. – Nassim Nicholas Taleb, The Black Swan (2007)

NTT, as Nassim Nichals Taleb calls himself, showed uncanny foresight when he wrote “The Black Swan”, only a year before the subprime mortgage crisis is pulling the largest banks down into the deepest disaster of their history. Banks like Citi, UBS, or Bear Sterns supposedly had ironclad risk management, to precisely avoid the sort of financial meltdown they are currently experiencing. As NTT writes, these banks are extremely good at planning for all sorts of foreseeable risks, only to be hit by the “big one”, the black swan, the one devastating blow that nobody could predict.

Swarm businesses are much better in dealing with those sorts of catastrophes. In a swarm of bees, if some of the honey collectors are hit by accidents, the swarm just continues functioning flawlessly. Even if a really big crisis – a black swan – hits the swarm, it copes extremely well. Take for example unexpected death of the queen. In this case bees will immediately and autonomously engage into succession planning. They will choose an ordinary larva, and start feeding it royal jelly, which will turn it into a queen. They do this without central intervention, by self-organizing decision of the swarm. This way the swarm evades extinction, and quickly gets a new egg-laying queen ensuring further prosperity of the swarm.

The same is true for swarm business. In a decentralized self-organizing business, risk management is not a highly centralized function directly reporting to an imperial CEO, but is part of everybody’s daily job. In a swarm business there continuously will be minor glitches and small catastrophes, but it will not be possible to get the maximum meltdown we are currently experiencing in the financial markets.
Eingestellt von pgloor 2 Kommentare