Why Hillary and Barack should stop bickering

Using our Web Condorview Coolhunting engine we have been keeping track of the political fortunes of the three US Presidential frontrunners for the last year or so. For the last month the wisdom of the crowds (on the Web) and the wisdom of the "experts" (the blogosphere) was predicting the political realities quite nicely, with Barack commanding about 50% of the mindshare, and Hillary and John McCain splitting the rest almost evenly. Yesterday, I noticed a total turnaround, however.
John McCain was passing both Hillary and Barack by a wide margin, and the same was still true today: 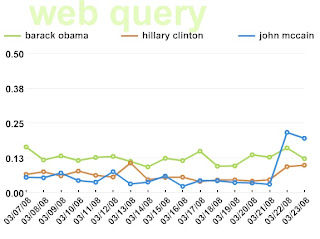 Very surprised, I checked the blogosphere also, where I got the same picture: John McCain leading the bickering democrats by a wide margin. This had obviously already been building up for almost a week: 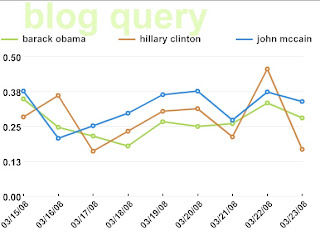 It seems to me the conclusion is simple: Hillary and Barack, if you want to keep the chances of a Democratic President intact, stop bickering and decide on who will be the candidate!
Eingestellt von pgloor 0 Kommentare