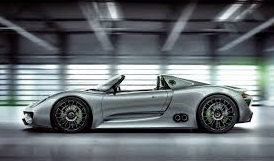 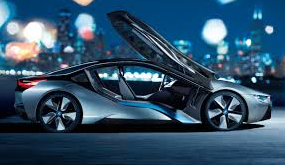 This is a simple example of Coolhunting over the internet. To start with, I would like to thank Professor Gloor for inviting me to write on Swarm Creativity blog. This was a study I did for the Collaborative Innovation Networks class in MIT Sloan, which was taught by Professor Gloor. The goal is to use variety of tools offered by Condor to compare people’s perception of products, and understand the difference between “cool” and “hot”.

Both BMW i8 and Porsche 918 are plug-in hybrid sports cars. However, the Porsche is one of the fastest and most expensive supercars ever produced, and the BMW is more practical and “affordable” (about 1/6 the price tag of 918). The question is, which is cooler?

The Web Collector is a good place to begin because it offers a straight forward first look into the popularity of the subjects under examination.

This is a data set that searches web pages updated between Sep 18 – 25th with the term “bmw i8” or “porsche 918” in them. Official websites were excluded to give a more objective view. Because of the limitation of searches comes with the free Google CES key, the number of websites is limited, but it still gives a fair representation of the two terms’ popularity on internet. It also allows us to see what websites are mentioning these terms and how they are interconnected. As we can see, Porsche 918 has much more mentioning and there are more links between these websites. It’s an indicator that there are more interests for 918, and the websites mentioning it are more important because they are linked to one another.

In later part of this post, we will come back to this tool to take a look at it over a longer time horizon.

After a quick scan over the internet, we can have a deeper drill into each vehicle by looking at how they are represented in Wikipedia using the tool Wiki Evolution. Since Wikipedia requires people voluntarily take out time to update information, it gives good clue as to how much attention a certain subject is getting.

BMW i8 on Wikipedia

As we can see from the above graph, BMW i8 is connected to very positive terms such as electric vehicle, drag coefficient, sports car, government subsidy, carbon dioxide, 0-to-60. This is a desirable outcome for BMW, since the car is associated with these positive and meaningful terms. People’s perception of this car is tilted towards where BMW would want them to.

Nevertheless, Porsche 918 is also linked to similar terms as i8. Moreover, 918 is linked to some of the highly positive terms that the BMW is not able to reach, such as fiber-reinforced plastic, super car, racing car, Nuburgring. Given that 918 is the fastest production car to lap the Nuburgring up to this point, this edge over i8 is not surprising.

Another point worth mentioning is that all of the models ever produced by Porsche are cross-linked on Wikipedia. It is the cloud of terms shown in the lower right part of the graph. It tells us that the fans of Porsche are devoting more time and energy into this brand. This is a sign of enthusiasm.

Twitter Fetch gives us the mentioning of a term in any given point of time, which is useful to track the change of interest over time.

Above is a static view of 3 fetches of each term merged together. There are people mentioning both cars in their tweets. From the graph, it looks like there are similar interests in both cars. 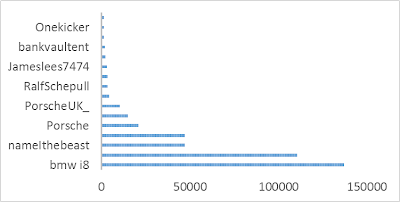 To take a closer look at these two terms’ presence in twitter world, we can export the betweenness centrality into excel and form a more easily readable chart. From the above chart, it is clear that BMW i8 is much more important in twitter world on Sep 25, 2013. The production model of this car was just launched for a week, and so this result is in line with expectations.

In fact, Porsche maintained their presence on twitter fairly well, given this specific point of time when BMW is extremely hot. This in part is due to the active role various Porsche official accounts were playing. 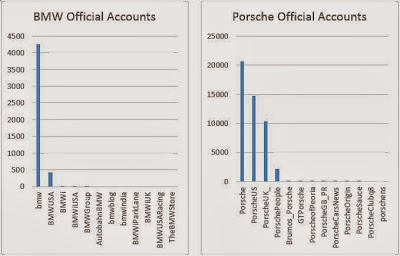 From the above two charts of the betweenness centrality of official accounts, we can conclude that there are not only more Porsche official accounts active on twitter, but they are also making a much larger impact.

Through word sentiment, we can see how people talk about these cars. 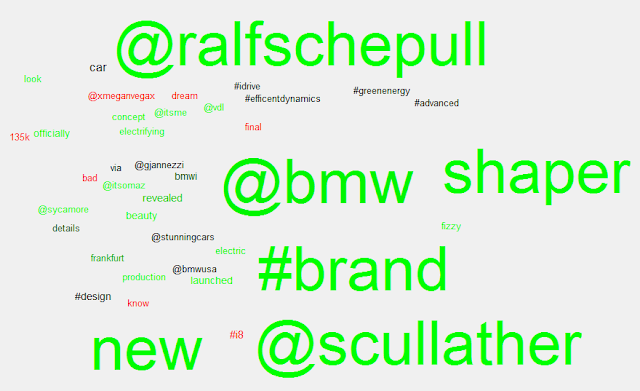 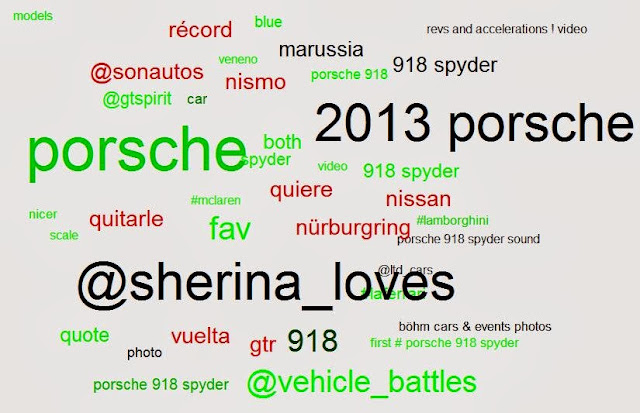 Again, people talk about these cars in a positive manner. People see BMW i8 as a “brand shaper”, and compares Porsche 918 to other super cars such as Nissan GTR and Lamborghini. The term “i8” did not come up in 918’s word cloud.

It is interesting to see how people categorize these cars. It seems like these cars are categorized according to their performance rather than been plug-ins. Nissan GTR has a similar price point as the BMW i8 and both sit 4 people, but only GTR comes up in 918’s tweets, not i8. The only reason GTR is so tightly linked to 918 is that both of them are among the fastest production cars, same for Lamborghini.

There are more websites talking about these cars, but Porsche 918 holds its advantage in both number of websites and connection between websites. 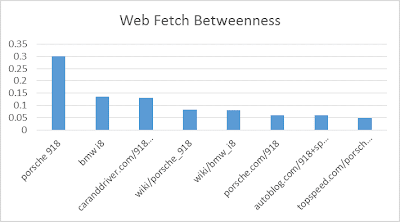 From this Web Fetch Betweenness chart, it is more revealing that web pages mentioning Porsche 918 are the most important ones. The term “Porsche 918” out weights “BMW i8” significantly, and out of the top 8 nodes, 6 of which are related to 918. 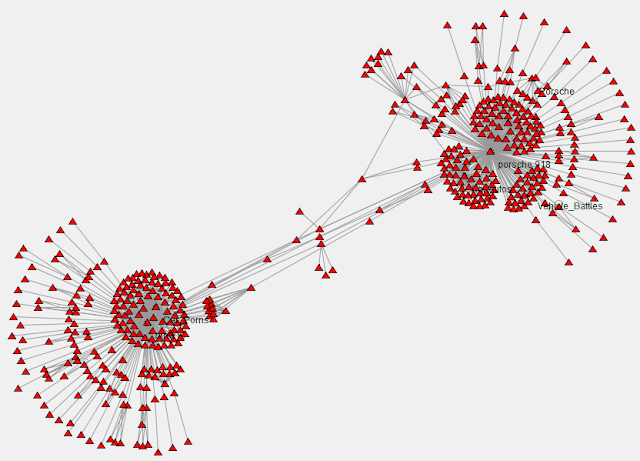 From a quick glance, it looks like Porsche 918 and BMW i8 maintained their comparative position in twitter from one month ago, when BMW just officially launched the production model i8. However, the betweenness chart tells a different story. 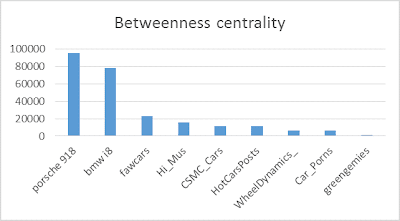 As the effect of the i8 official launch wears off, Porsche 918 over takes the BMW in betweenness.

The above cross-time comparisons are good examples of the difference between hot and cool. BMW i8 was hot because it got a lot of media coverage with the launch, but Porsche 918 was cool because it has a prolonged impact across different internet platforms.

It echoes with what Professor Gloor says: hot is easy, cool is hard but lasts longer.