Using the software Condor and its capacity to interpret word sentiment I will explore the context and relationships between the 3 brands Apple, Google and Oakley on the Web. This approach is based on coolhunting the Web through qualitative data analysis.


Brands Selection
What do Apple, Google and Oakley have in common? The relation between the giants Apple and Google is obvious, as they both compete in the technology arena and they are both trendsetters in their particular and common markets.


How does Oakley fit into this profile? Oakley is the top innovator in the eyewear industry (e.g. they invented the curve lens); this culture of innovation has carried them to explore other potential uses of this eyewear. In particular ,Oakley launched a product called AIRWAVE last year. This product includes a particular technology that allows any snowboarder (or skier) to watch and read analytics, track information, text messages, videos etc… through a very small display embedded into the lens.
Oakley's Airwave. This is, basically, Oakley’s moving into the tech industry.


On the other hand, it is publicly known that Google has launched a device called Google Glass.
Google Glass.This is Goggle’s landing into the eyewear industry (or wearable industry).


How about Apple? Well, the market has been wondering for awhile what is their next big thing. A kind of wearable device? Is it a watch (Oakley also owns a line of watches)? Is it glasses?
Oakley, Google, and Apple have in common their aim in marketing high end technological accessories (wearable industry). Let’s see what the SWARM can tell us?


Brand names association
Twitter brings a good scenario for finding words associated with the brands. Tweets are short with a strong content.


Oakley
Traditionally associated with coolness, extreme sports and innovation. Fetching tweets (sample over 1500 tweets) containing only the brand name, we could not observe a good sense of this sentiment. 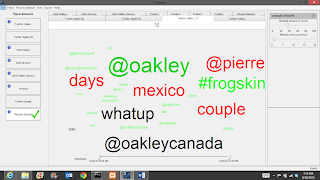 Most of the tweets are referring to e-retailers advertising points of sales (these tweets include re-tweets). Perhaps that is the reason why Oakley Canada has a strong presence.
The only reference to a product is the #frogskin (this is an Oakley lifestyle line); for the moment, no sign of Airwave. 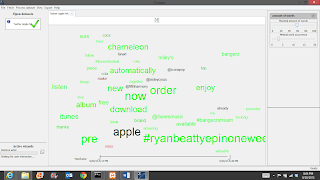 The tweets (sample of 1500) reflect a stronger presence of products or business concepts (iTunes, music, download), mainly from the music area. It is interesting to see words like amazing and kicking in as positive sentiment. The tweets are cleaner, not as many e-retailers looking to generate traffic to points of sales. This might suggest  better digital marketing management at Apple as opposed to Oakley. 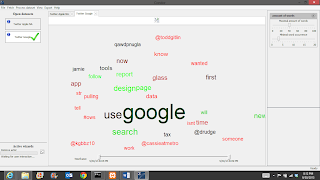 
OBSERVATION 1: Neither of the 3 Brands has a strong association with their products Airwave (Oakley), Glass (Google), or iWatch (Apple).


If we combine the 3 data sets and ask Condor to order nodes by betweenness centrality we can identify actors with a mediating role. 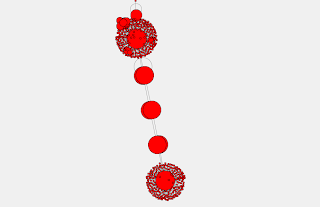 OBSERVATION 2: Reaching out to these users represents an opportunity to influence other followers.


Products:
I now use a web search for comparing the 3 products (Airwave, Glass, iWatch). The main reason is that websites offer more content, as opposed to tweets which are shorter.


Airwave (Oakley) vs. iWatch (Apple)
The word Airwave by itself is not strongly related with the brand Oakley; however, if we search for Airwave together with iWatch, we observe the brand Oakley. The web is relating the Airwave goggles with the possible iWatch. Below are the strongest sentiments, graph prunning and some examples of content: 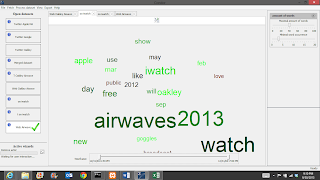 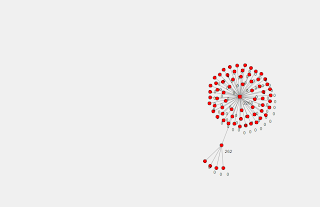 
Airwave (Oakley) vs. Glass (Google)
The sentiment of these 2 words together is positive (in general). Both products are observed as truly disruptive in their markets (words as "technology", "video", "smart", "wearable"). 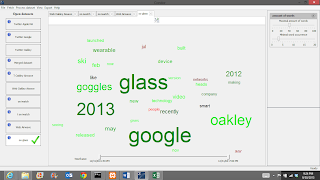 The snippets suggest a hint of competition.

OBSERVATION 5: A pattern of new competition is being established in the wearable market.


iWatch (Apple) vs. Glass (Google)
Both products have not been launched yet. However, they both have generated big expectations (words as "rumors", "talked"; word-dates as "Sep" and "Aug"). 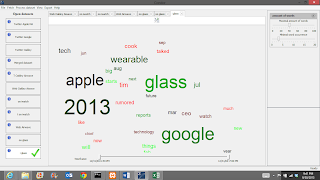 
OBSERVATION 6: The Swarm considers these 2 brands to be in competition in the wearable market.
OBSERVATION 7: The Swarm, perhaps, does not see Oakley as a direct rival for the 2 big names Apple and Google.

This first analysis opened up some possible hypotheses for further development