August 05, 2010
We have been working on trying to predict market indicators for quite some time by analyzing Web Buzz, predicting who will win an Oscar, or how well movies do at the box office. Among other things we have correlated posts about a stock on Yahoo Finance and Motley’s Fool with the actual stock price, predicting the closing price of the stock on the next day based on what people say today on Yahoo Finance, on the Web and Blogs about a stock title.

The rising popularity of twitter gives us a new great way of capturing the collective mind up to the last minute. In our current project we analyze the positive and negative mood of the masses on twitter, comparing it with broad stock market indices such as Dow Jones, S&P 500, and NASDAQ. We collected the twitter feeds from one whitelisted IP for six months from March 30, 2009 to Sept 4, 2009, ranging from 5680 to 42820 tweets per day. According to twitter this corresponds to a randomized subsample of about one hundredth of the full volume of all tweets, as the total volume in 2009 was about 2,5 million tweets per day. We tried to measure collective hope and fear on each day by applying the simple metric of counting all tweets containing the words “hope” – there were 54 to 467 tweets per day, and “fear” or “worry” – there were 9 to 100 tweets per day. This tells us that people prefer optimistic words (hope) to pessimist words (fear or worry).

As external benchmark of investor fear we used the Chicago Board Options Exchange Volatility Index VIX, which is strongly negatively correlated with Dow, S&P 500, and NASDAQ, which is not surprising, as the spread of stock options on a given day is used to calculate VIX. Initially we expected the number of tweets with hope to negatively correlate with VIX, and the number of tweets with fear or worry to correlate positively with VIX. Surprisingly, we found positive weak but insignificant correlation for both “hope” (0.135) and “fear” or “worry” (0.172) with VIX, and negative significant correlation with both “fear” and “worry” and “hope” with Dow NASDAQ and S&P500 (This means that people start using more emotional words such as hope, fear, worry in times of economic uncertainty. We therefore created a simple twitter-volatility index combining mentions of hope, fear and worry, normalizing it with the total amount of tweets per day as a baseline. This index displays strong significant negative correlations to Dow, NASDAQ and S&P500, and strong significant positive correlation to VIX (see table below). 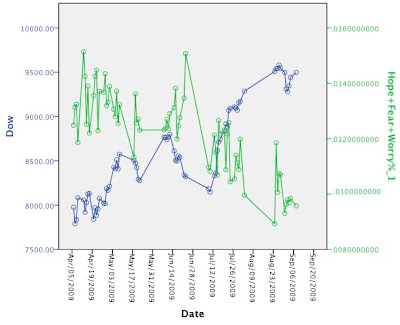 To put this in simple words, when the emotions on twitter fly high, that is when people express a lot of hope, fear, and worry, the Dow goes down the next day. When people have less hope, fear, and worry, the Dow goes up. It therefore seems that just checking on twitter for emotional outbursts of any kind gives a predictor of how the stock market will be doing the next day.

Just to be clear, what we have presented here are very early preliminary results, and much more work is needed to scientifically verify it.
coolhunting market index prediction stock trend prediction volatility index

Popular posts from this blog

There are different types of snakes in Ghana

Yesterday morning our houseboy killed a poisonous snake in our garden. The property of my friend is not that big, it has a small, but well-tended garden. The garden is fenced in, and the fence is lined by overgrowing flower bushes. When the houseboy was cutting the bushes, he suddenly got really exited and called us to show us a pretty large snake, about 1.2 meters long, with dark green and yellow stripes. The snake was resting high up in the bushes, right within the flower bush which had overgrown the side door where all the visitors were passing through. It was a pretty eerie feeling that we might have come and gone for some days right underneath a poisonous snake. The fix of the houseboy to this problem was as radical as it was short and brutal. He called another man from the neighborhood for help. With a long stick the houseboy threw the snake out of the bush on the street, and then the other man shattered the snake’s head with a large stone – Risk management by eliminating the ris
Read more

June 25, 2021
We are not resources.     We are not capital.     We are not talent.     We are not labor.     We are not manpower.     We are bees.     We are all members of the same swarm.     In preindustrial times, people were like bees, creating what they needed, growing their grain, baking their bread, sewing and stitching their clothes, and building their furniture and houses. With the onset of industrialization, division of labor arose, and managers started to manage their resources - one of which happened to be their human resources. But humans don’t particularly like to be resources – being a resource implies being a passive asset, which is being moved around like a pawn in a game of chess, without agency and own will. Synonyms like “human capital”, “talent”, “labor”, or “manpower” are not much better. “Human capital” is even worse, as it conveys the connotation of foreign ownership: according to definition, capital is an asset owned by an individual or organization available for a purpose s
Read more